The Civil War: Did The North Use Slave Labor? 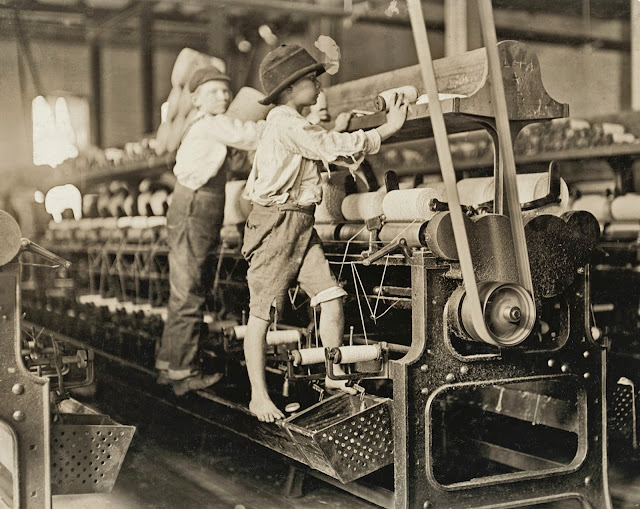 Since I've now been forced to be blunt about the point of this article, I can tell you now that it is about child slave labor in the North during the Civil War. Because of discussions where people are trying to turn this article into something that it is not, allow me to also say that this piece is about the hypocrisy of those in the North who were against slavery in the South but were not bothered by the child slave labor going on around them.

Let's point to the fact that young children routinely worked in the United States legally for many years before and after we became a nation. Some have indicated that black slave labor in the South does not compare to child slave labor in the North because the children were not property as the blacks were. Though that was the reality of black slaves, when looking at how children in the factories and mines were treated, one has to ask if the children were treated the same or worse than property?

Children were enslaved, they were separated from their families, they were certainly exposed to serious hazards and health risks, and they were left to fend for themselves. Child labor abuses were plentiful during the Industrial Revolution from 1820 to 1870. But it did not end in 1870. It continued for another 60 years.

Industrialization attracted workers and their families. Many relocated from farms and rural areas to cities to do factory work. In factories and mines, children were actually preferred by businesses because owners saw children as more manageable, a lot cheaper, and unwilling to strike.

Our children worked in mines, manufacturing plants, factories of all sorts, textile plants, agriculture in various ways, including harvests and canneries all over the North. And yes, they were newsboys, peddlers, messengers, and bootblacks. The lucky ones swept the trash and filth from city streets, stood for hours on street corners pushing newspapers, and delivered messages for pennies. Others worked in the mines and coughed up coal dust all through a 10 to 12-hour shift in the heat of the dark. Others sweat to the point of passing out while tending factory furnaces.

Overall, child laborers were the sons and daughters of poor parents, and of course, recent immigrants depended on their children’s measly wages to survive. They were the children of industry and large cities in the North during the Civil War. What blacks slaves were to the South, they were to the North.

The fact is forms of child labor, including indentured servitude and child slavery, have existed throughout our history. It actually predates our independence. Some were lucky and were treated easier than others. Others were treated as property.


Fact is, we can trace child slave labor back to before the United States was founded in 1776. It's true. There was child slave labor in the 18th century. From farms to factories, young children were used as laborers.

As British colonies, long before our independence, English laws allowed children to work in everything from farms to manufacturing. By 1833, when the British outlawed black slaves, child slavery in the form of indentured servants and forced child labor was commonplace in England.

Of course, American colonial laws modeled their laws after British laws. And yes, those laws forced many children into workhouses, factories, and mines. In fact, those laws allowed for orphan boys to be placed into apprenticeships in trades. Orphan girls were sent into homes to do domestic work, work in laundries, and of course, work in sweatshops.

After we broke away from England, American industry kept up the practice and sought out children to use in all sorts of manufacturing facilities throughout the former colonies. Child labor served Alexander Hamilton's vision of America. He saw child labor as providing increased labor to support the industry.
According to his vision, when Alexander Hamilton was Secretary of the Treasury, he actually stated in a 1791 report on manufacturing that "children who would otherwise be idle could become a source of cheap labor."
Around the same time, a national newsweekly printed their opinion stating that "factory work was not for able-bodied men, but rather better done by little girls from six to twelve years old."
Besides advertisements seeking children from the ages of 8 to 12 to work in a cotton mill in the North, it's said that by 1820 children made up more than 40 percent of the mill employees in at least three New England states. So while it is said that the manufacturing industry that grew following the Civil War required children as young as 8 years old, we should recognize that forced child labor in factories, in retail stores, on the streets, on farms, in mines, and elsewhere, took place long before the Civil War.

This was so much the case that in 1842, a few Northern states began to limit a child’s workday. Massachusetts lowered a child’s workday from 14 hours to 10 hours, but most laws were not enforced. And Massachusetts was not the only state to use forced child labor, child slavery in the industrial North during the Civil War.

It is a fact that women and children dominated pre-Civil War manufacturing in the North. It is a fact that the number of children used in the North actually increased during the Civil War because of the need for everything from uniforms to shoes and belts, hats, and hardware. Yes, the beans, bullets, and bandages that keep an Army functioning.

And while the North was afraid of the influx of freed slaves fleeing the South, Northerners, in fact, re-enslaved many freed slave children just as they did the children of immigrants during the Civil War. It's true as the children of freed slaves in the North were treated the same as other children in that they worked 10, 12, or 14 hours a day and six days a week. And while those children were, in essence, re-enslaved through forced labor and apprenticeship agreements, they were bound to companies no differently than they were to their slave masters in the South.

In 1870, the first U.S. census report on child labor numbers accounted for 750,000 workers under the age of 13. These figures came mostly from the Northern states. These numbers did not include children who worked for their families or on farms.

For many years, not much changed in the North regarding the use of forced child labor. But after the Civil War, forced child labor abuses became a routine nationwide as more cities adopted the practice. And yes, the scams to get more children increased. For example, in New York City in the 1870s, there was a scam going around that had to do with Italians who secured employment for Italian immigrants. The scam was child slavery under the guise of apprenticeship.

The people responsible for that scam deceived Italian parents still living in Italy into willingly sending their children to America to begin an apprentice program. Once agreements were signed, then the children were shipped to America. At the docks, they met and were immediately forced to work in horrible conditions. And as was the case throughout the North for many years, if the children failed to comply, they were beaten and starved.

This was happening so much so that in 1873, just eight years after the Civil War, the New York Times stated, "The world has given up on stealing men from the African coast, only to kidnap children from Italy."

While forced child labor was pretty much restricted to the Union during the Civil War, it had become more and more commonplace throughout the nation after the war. Southerners followed the example set by Northerners and filled the openings left by freed black slaves with women and children. And yes, forced child labor and apprenticeship agreements extended to businesses in the South after the war.

It is said that freed slaves willingly exchanged the labor of their children for "training" provided by their former slave owners. So yes, after the Civil War, black freed slave parents forced their own children into re-enslavement. Imagine that.

Slavery comes in several different forms. Forced Marriage, Domestic Servitude, Indentured Servants, Forced Labor, Bonded Labor, Child Labor, and Sex Trafficking are all forms of slavery. As for "chattel slavery"? Chattel slavery is the "owning" of human beings as property. They are bought, sold, given, and inherited. Since slaves in this context have no personal freedom or recognized rights to decide the direction of their own lives, isn't that comparable to what they did to children until the 1930s?

The child slave market was filled by hiring others to find them and detain them. In some cases, it was from orphanages. Other times it was from a destitute family. They were lied to and held prisoner, and even kidnapped. They were sold into bondage and stolen. They had no personal freedom or recognized rights, were beaten and starved, had bounties put on their heads if they escaped from where they were housed or worked, and were in some cases shackled to machinery and given a coffee can to urinate in. To me, that's slavery. That is certainly not the life of a free person.

As for child labor laws, in 1904, Federal child labor reform laws began to take shape. But that didn't stop employers from putting children to work. In fact, by 1911, it is said that more than Two Million American children under the age of 14 were working 12 to 14 hours a day for six days a week.

And yes, well into the 1900s, children worked in unhealthful and hazardous conditions and always for what was known as slave wages. As for unhealthful and hazardous conditions, even into the 1900s, young girls continued to work in mills and garment factories. They faced the danger of losing fingers or even a foot while standing on top of machines to change bobbins. They risked being scalped alive if their hair got caught in the machinery.

As for the children younger than 10 who were forced to work in the coal mines, they were known as breaker boys. They were smothered and crushed by piles of coal. They fell down shafts. Breaker boys faced the threat of cave-ins, gas leaks, explosions, and other hazards that adult miners did. But let's be honest and talk about their slave wages. They made 10 times less than the adults they worked beside.

While black emancipation came about in 1863, it wasn't until 1938 that Federal regulations of child labor were achieved in the Fair Labor Standards Act. And while it did not emancipate children completely, it limited the minimum ages of employment and hours of work for children through Federal law. But, unfortunately, such laws were violated all the time.

The point is regarding child slave labor during the Civil War in the North. It is about the hypocrisy of those in the North who were against slavery in the South but were okay with what was happening in the factories and the mines in the North.

Their hypocrisy is in regards to what offended them. It was selective at best. While they were rightfully offended by blacks in chains, they were hypocrites in that they should not have turned a blind eye to the child slave labor practices that were taking place around them in the North at the same time.

While no longer applied to blacks after emancipation, those labor practices were certainly applied to children until they stopped in the late 1930s. And the only reason it stopped was that adults needed jobs. Adults saw children as taking jobs away from adults during the Great Depression, and that's when it stopped.