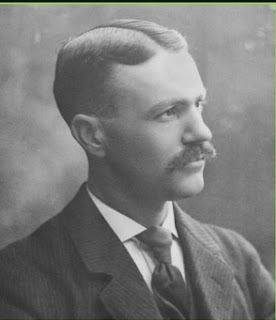 Here's a story about the needless killing of a County Sheriff in 1899. His murder sent local vigilantes on a frantic search to lynch his killer.

According to the Monterey County Sheriff’s Office, Henry Reed Farley was born in Salinas, California, in March of 1870. He was Michael and Rodalee Farley’s fourth of six children.

Henry's father was a lawyer originally from Massachusetts. His mother was originally from Alabama. Henry grew up and lived in Salinas. He attended school there, and while not yet 24 years of age, Henry was appointed Postmaster of the small town of Gonzales, California. That was on January 11th, 1894.
Gonzales is a town in Monterey County about 17 miles Southeast of Salinas. At the age of 26, Henry was said to be a journalist for a local newspaper in Gonzales.

On January 1st, 1899, at age 29, he became the Sheriff of Monterey County. He may have been the youngest man to ever be elected County Sheriff in the State of California up to that time.

He had only been with the Sheriff’s Department for 9 months when he was shot and killed while attempting to arrest a suspect. He was 29 years old when he was killed. Newspapers stated "never before has this county seen such a large funeral." All stores, saloons, and schools were shut down from 9 am to 12 pm, and all flags were flown at half-staff. At the time of his death, Sheriff Farley was survived by his mother Mrs. Rodalee Farley.

Among other newspapers such as the San Francisco Call, Monterey County Sheriff Farley's death was in the Sacramento Daily Union, Volume 98, Number 29, September 19th, 1899. It ran the following story.

Shot and Killed by a Man Whom He Attempted to Arrest — Talk of Lynching the Murderer.

SALINAS, Sept. 18. H. R. Farley, Sheriff of Monterey County, was shot and killed at 11 o'clock to-night by George Ceasar, whom he was trying to arrest for arson.

Ceasar, who is a German, aged 22 years, had been drinking heavily, and threatened to shoot four officers and burn up the town. About 10 o'clock an alarm was turned in, and it was found that a barn was on fire. Soon afterward fire was discovered in an adjoining cottage, and it was at once suspected that Ceasar was carrying out his threat.

Sheriff Farley, accompanied by former District Attorney Zabal, went in search of Ceasar, who had run home and armed himself with a double-barreled gun. As Farley entered the house Ceasar advanced a few feet, fired, and shot the officer through the head. Farley died in a few minutes.

While Zabal was administering to his dying comrade the murderer escaped. The entire country was soon aroused, however, and posses went out from near and far to search for the assassin. An hour after the shooting he was discovered hiding in a cellar.

The mob frantically proclaimed its intention to lynch him, and a posse of Deputy Sheriffs and Constables had a most difficult time in protecting the prisoner. While argument ran high one of the Constables, unobserved, managed to smuggle Ceasar into a buggy and drove off at a gallop to the County Jail before the mob realized the ruse.

Sheriff Farley was perhaps the most popular man in Monterey County. He was 29 years of age, and last November was elected Sheriff by a large majority over John Matthews, who had filled the Sheriff's office for twelve years.

Prior to his election Farley had been a newspaper man, his last journalistic venture having been the editorship of the Gonzales "Tribune."

His murderer was as much despised in Salinas as the Sheriff was beloved. He has been considered a worthless character. He has no occupation.

TALK OF LYNCHING THE MURDERER. SALINAS

Sept. 19—1 a. m. — The revengeful men of Salinas declare that they will hang Ceasar to-night, provided he does not die from the loss of blood. He was shot in the stomach by Constable Allen, and when captured in the cellar was weak from loss of blood. It is also believed he shot himself, but inflicted only a flesh wound.

No one in Salinas now knows whether Ceasar is dead or alive, because he was driven off by a Deputy Sheriff to protect him from the certain vengeance of the mob.

It now transpires that Ceasar was never in the jail, although many for a time believed him to be there. The officers, knowing that they could not protect their prisoner, drove him toward the hills, and it is generally believed the murderer was taken to Hollister, as it is said he would have been safe nowhere in Monterey County.

Meanwhile the crowd has never left the jail. They are all armed with ropes as well as pistols and shotguns, and they say the murderer of the youngest Sheriff in the State will be summarily punished.

The town, and in fact the entire county, is aroused as it never was before. The men who are trying to lynch Ceasar are not the disorderly element, but comprise some of the most important citizens of the county. They are firm in their resolve to promptly avenge the death of Sheriff Farley, and say they will remain at the jail all night.

Detachments of citizens mounted and in buggies are scouring; the foothills, and they say if they find the murderer in charge of his guardians the latter will be forced to give up j their prisoner to swift punishment. At 2 a. m. excitement in Salinas has in no wise abated, and many still hope to avenge Farley by lynching his murderer.

Frederick Ceasar, a brother of George, came into town about 1:30 a. m., proclaiming that he was the "brother of the man who killed Farley." Had he not been hustled away he would certainly have suffered violence at the hands of the infuriated citizens.

Besides a few different newspapers of the times to compare stories of his death, and since the standard line of "he was shot and killed while attempting to arrest a suspect" really doesn't sit well with me, I dug deeper to find out how Sheriff Farley died.

On the night of September 18th, 1899, George Ceasar tried to ditch the pursuing officers and eventually made it to his father's house on Pajaro Street. Sheriff Farley and Deputy Keef arrived on the scene close behind him.

As soon as they arrived, the Sheriff came face to face with Ceasar in an alley behind his father's house. George Ceasar was indeed armed with a shotgun. And yes, reports state that Sheriff Farley made a number of attempts to defuse the situation and talk Ceasar into surrendering.

Sheriff Farley was heard to have said, "George, George, be quiet, keep cool."


To which Ceasar reportedly replied, "Stand back or I'll shoot you."

Sheriff Farley's last words were "No you won't George, you know me."

Ceasar fired both barrels and killed the young Sheriff.

A newspaper stated, "The Spirit of Henry Reed Farley winged it's flight to the Great Beyond". 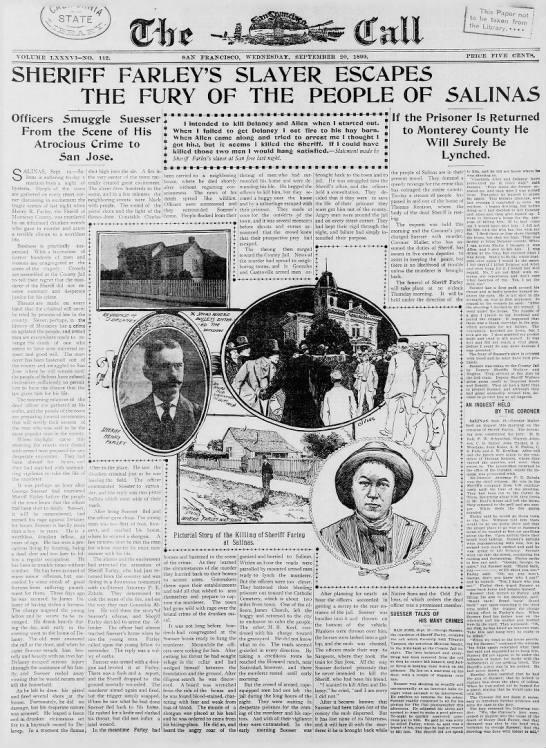 Monterey County Sheriff Henry Reed Farley's life was cut short on September 18th, 1899. He had only been County Sheriff for 9 months when he was senselessly murdered by George Ceasar.

Newspapers like the Sacramento Daily Union and the San Francisco Call reported that the Sheriff had been murdered. Citizens in the town of Gonzales were angry and wanted to lynch Ceasar. A few newspapers reported how, among other things taking place, gun shop owners opened their doors and  passed out rifles and pistols and shotguns to local vigilantes that were out beating the bushes looking for Ceasar. Hardware store owners are said to have passed out lanterns and ropes so that he could be lynched.

George Ceasar was arrested by Salinas City Marshal William Nesbitt and Deputy Keef. Nesbit himself later became County Sheriff. Deputy Keef was the officer who took Ceasar to the jail in San Jose to avoid the vigilantes that had surrounded the county jail in Monterey.

Ceasar was hanged at San Quentin Prison on July 15th, 1904. It's said that the people of Monterey County celebrated when they got the word that George Ceasar had finally been hanged. Yes, they loved Sheriff Farley that much.