A Handgun or Rifle for Self Defense 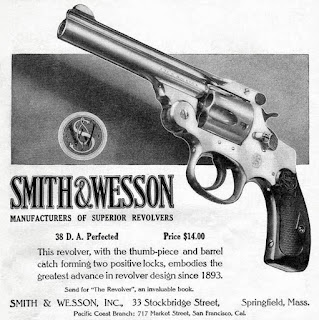 He wrote to say, "a handgun is less accurate and less powerful than a rifle. A handgun has less of an effective range than a rifle, especially if your assailant is over 100 yards away. There's the added bonus of people wanting to leave you alone if they see you carrying a rifle."

Talking about his preference of rifle in the Old West, he said that he would prefer a "modern rifle" to pack on a daily basis. He went on to say that because of poor ballistics of period rounds and metallurgy of the weapons of the times, that he would want an AR-15 of some sort.

So OK, that's when I realized that he was just being flippant and messing with me. And no, I don't think he was serious. In fact, I know he's a collector of antique firearms and messes with me all the time over this and that.

But, for the sake of having something to write about other than history today, let's say he was serious. Of course he's right about a handgun being "less powerful than a rifle." Just as he is when he said, "a handgun has less of an effective range than a rifle, especially if your assailant is over 100 yards away." And yes, he's also right that "people will leave you alone if they see you carrying a rifle." While not the case so much in the Old West, that would certainly be the case today.

Of course, as an old Marine Grunt, I can tell you that I would prefer a rifle or a shotgun in a firefight when everything hits the fan. Let's be honest, like anyone, I'd want a rifle over a handgun if I knew that I was going into a combat situation that wasn't close quarters. In fact, it's a safe bet to say that any infantryman would want a rifle if going into a situation where you expect a firefight and it was in the open.

Some say a handgun is used as a weapon of last resort. Some say a handgun is used until we can get to a rifle or shotgun if things have gotten that out of hand. But all of this leads us to the question, should any of us arm ourselves for a military level combat situation on a daily basis? Yes, even if they were in what some perceive was a violent Old West? Which by the way, it wasn't that violent in comparison to what was taking place in the East. But that's a subject that I'd like to write about at another time.

For me, I carry a handgun because I would rather have a gun and not need it -- then to need a gun and not have it. Since most assaults take place between 3 to 7 feet, with 20 to 25 feet being the farthest, a handgun is the idea weapon for what's needed in that circumstance. That hasn't changed and is also how it was back in the Old West. And while handguns are the weapons of choice by criminals, handguns are excellent self defense equalizers because they are effective in close combat situations as I just mentioned.

And let's be frank here, if a threat is far enough away that we'd need a rifle -- then a jury wouldn't see it as a threat at all. Most juries would not see us in mortal danger if a threat is too far away. That's just how they look at it. That's where justifying the use of a rifle can be difficult.

Now, I realized that someone out there is going to think that I'm bad mouthing the use of an AR-15. Well, I assure you all that that's not the case. In fact, I was just reading a news story about a man who used an AR-15 against multiple intruders during a home invasion. He needed all of the firepower that he could muster against multiple assailants to keep his family safe. I tip my hat to him.

I have rifles and shotguns at my home for self defense purposes. It is a fact that I can get to any of them before getting to a pistol when I'm at home. And as for having a ranch rifle in my truck, I did for years before getting my CCW. So please, don't think this post is bad mouthing the use of a rifle or a shotgun for self defense. Fact is, while there is a place for every weapon, what's I'm talking about here is simply the practicality of walking around with an AR-15 platform as one's carry gun. I don't see that as very practical at all.

The practical aspects of handguns are overwhelming. Simply put, they are a great self defense equalizer simply because they enable anybody, regardless of age, sex, or strength level, the ability to defend themselves while using deadly force. Because of that, and concealability, handguns are used in thousands of self-defense situations and have saved countless lives.

As for the limitations of carrying a handgun? Handguns cannot be carried everywhere. Like it or not, there are legal restrictions as to where we can and can't carry a gun. Besides airports and courthouses, most all government buildings forbid carrying a handgun on their premises. But then again, the same goes for someone carrying any sort of gun on their premises, rifle, shotgun, bb gun, musket, you name it. Even back in the Old West, officers were known to search people upon entering courtrooms. That's especially true after a few gun battles that took place in courtrooms back in the day.

Unlike Lucas McCain in The Rifleman, it's not very wise to carry a rifle around with us on a daily basis without frightening people. In the Old West, people did. But they also put them up with the bartender or local law, especially in towns that had no carry laws. And again, let's be honest, more and more towns were adopting such laws as more and more Easterners came West to "civilize" the frontier. Of course, many were escaping the violent East. But as I said before, that discussion is for another day.

Fact is, in the hands of a citizen who has sought training, a handgun is all anyone will need in most self defense situations. Handguns have been a good fit for most all self defense situations and have served the purpose which they were designed for. Yes, close combat. Proof of this is in the statistics that show armed citizens are more likely to escape being robbed, raped, or assaulted than that of unarmed citizens.

As for the deterrence aspect of handguns, studies show that a large percentage of felons are actually frightened by armed citizens, felons seldom if ever commit crimes on citizens who they believe are armed, felons are more concerned about being shot by an armed citizen than by the police, and felons are in fact afraid of the unseen handgun in the hands of a citizen trained in its use.

It is said that using a firearm is the last resort when no other option is left. So while we may not carry a rifle like Lucas McCain did in The Rifleman, a convenient, easy to conceal, easy to carry handgun is an undeniable self defense equalizer. And in an emergency, it may mean the difference between life and death.