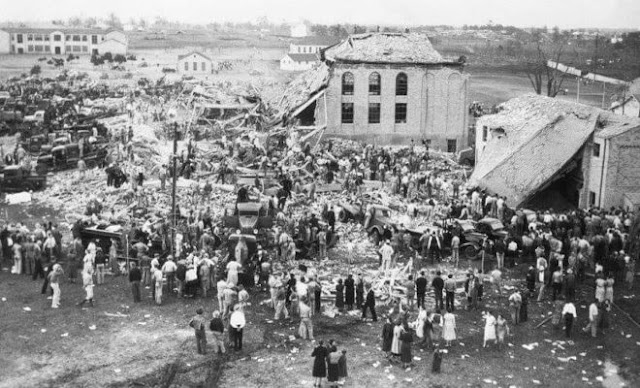 It is interesting what I stumble across on the Internet. I've been looking at homes in Texas lately and found the town of New London. The town is located on Texas State Highway 42 about 12 miles south of Kilgore and about 120 miles or so southeast of Dallas. It's actually in Rusk County. While looking at a piece of property there, I found an interesting story about what turns out to be the worst school disaster in United States history.

It sounds as though the town started out simply as "London, Texas" back in 1855 when the folks there on the frontier opened a post office. Sadly, that post office was only open for a short time before closing in 1876.

Until the 1930's, the town of London, Texas, was all about agriculture. It was primarily a cotton and corn growing area. But, it should be noted that farmers there were known to also produce supplemental crops such as watermelons, peaches, and tomatoes. All of the local produce was shipped from the Henderson and Overton Branch Railroad depot which was a spur of the International-Great Northern.

In 1930, things changed when the first oil well in the East Texas oilfield was drilled a few miles from the town. That made London an instant oil boomtown. With the old boom, a number of landowners became wealthy overnight. And with the money coming in, among other things, the folks there were able to open a new post office. That was when the folks there found out that a "London" post office was already established in Kimble County. Knowing that was the case, they used the name "New London."

By 1931, the Humble Oil and Refining Company relocated over a hundred families from the Corsicana oilfield and their district headquarters to New London. With that, refineries were built and more jobs came to New London. While there are a lot of people today who vilify oil companies, that was the Great Depression and the people there at the time saw the oil companies as a blessing. Because along with the oil companies providing jobs, they provided housing, electricity, and even free gas and water.

The oil companies are said to have even spent the money to built parks, community buildings, and improve infrastructure. About that time, they also built a modern school to replace the old schoolhouse that was built in 1877.

I find it remarkable that the labor unions at the time negatively called what took place in towns like New London, "paternalism." Paternalism is defined as "the policy or practice on the part of people in positions of authority of restricting the freedom and responsibilities of those subordinate to them in the subordinates' supposed best interest." Another definition says, it's "a system under which an authority undertakes to supply needs or regulate conduct of those under its control in matters affecting them as individuals as well as in their relations to authority and to each other."

Whether it was the pineapple and sugar can companies in Hawaii, car companies in Michigan, or oil companies in Texas, labor unions attempted to incite unrest and discontent by thrown a negative slant on companies providing essential services for their employees. Calling what companies did at the time as "paternalism" was a propaganda to get people to join the Unions.

Labor Unions tried to say that big corporations such as the oil companies in Texas tried enslave their workers, to restrict their freedom and responsibilities, and treat them like children. In return, labor unions attempted to recruit members by saying that they would give workers benefits. I find it ironic that what the labor unions called "paternalism" is what we today call great company benefits such as providing available medical and dental, company stores, housing, discounts, community involvement, daycare, meals on wheels, and support for local schools.

In 1937, the folks in New London had one of the richest rural school districts in the entire United States. It's said that residents there were very proud of the beautiful, very modern, steel-framed, school building. No one was emotionally ready for happened on March 18th, 1937.

The following report is what took place:

On March 18, students prepared for the next day's Interscholastic Meet in Henderson. At the gymnasium, the PTA met. At 3:05 P.M. Lemmie R. Butler, instructor of manual training, turned on a sanding machine in an area which, unknown to him, was filled with a mixture of gas and air.

The switch ignited the mixture and carried the flame into a nearly closed space beneath the building, 253 feet long and fifty-six feet wide. Immediately the building seemed to lift in the air and then smashed to the ground. Walls collapsed. The roof fell in and buried its victims in a mass of brick, steel, and concrete debris. The explosion was heard four miles away, and it hurled a two-ton concrete slab 200 feet away, where it crushed a car.

Fifteen minutes later, the news of the explosion had been relayed over telephone and Western Union lines. Frantic parents at the PTA meeting rushed to the school building. Community residents and roughnecks from the East Texas oilfield came with heavy-duty equipment. Within an hour Governor James Allred had sent the Texas Rangersqqv and highway patrol to aid the victims.

Doctors and medical supplies came from Baylor Hospital and Scottish Rite Hospital for Crippled Children in Dallas and from Nacogdoches, Wichita Falls, and the United States Army Air Corps at Barksdale Field in Shreveport, Louisiana. They were assisted by deputy sheriffs from Overton, Henderson, and Kilgore, by the Boy Scouts, the American Legion, the American Red Cross, the Salvation Army, and volunteers from the Humble Oil Company, Gulf Pipe Line, Sinclair, and the International-Great Northern Railroad.

Workers began digging through the rubble looking for victims. Floodlights were set up, and the rescue operation continued through the night as rain fell. Within seventeen hours all victims and debris had been taken from the site. Mother Francis Hospital in Tyler canceled its elaborate dedication ceremonies to take care of the injured.

The Texas Funeral Directors sent twenty-five embalmers. Of the 500 students and forty teachers in the building, approximately 298 died. Some rescuers, students, and teachers needed psychiatric attention, and only about 130 students escaped serious injury. Those who died received individual caskets, individual graves, and religious services.

Three days after the explosion, inquiries were held to determine the cause of the disaster. The state of Texas and the Bureau of Mines sent experts to the scene. Hearings were conducted. From these investigations, researchers learned that until January 18, 1937, the school had received its gas from the United Gas Company.

To save gas expenses of $300 a month, plumbers, with the knowledge and approval of the school board and superintendent, had tapped a residue gas line of Parade Gasoline Company. School officials saw nothing wrong because the use of 'green' or 'wet' gas was a frequent money-saving practice for homes, schools, and churches in the oilfield. The researchers concluded that gas had escaped from a faulty connection and accumulated beneath the building.

Green gas has no smell; no one knew it was accumulating beneath the building, although on other days there had been evidence of leaking gas. No school officials were found liable.

These findings brought a hostile reaction from many parents. More than seventy lawsuits were filed for damages. Few cases came to trial, however, and those that did were dismissed by district judge Robert T. Brown for lack of evidence. Public pressure forced the resignation of the superintendent, who had also lost a son in the explosion."

Sadly, it takes such a disaster to fix things. History teaches us that some good does come out of such disasters. In the case of the New London Texas School Explosion of 1937, the massive explosion that would go down as the worst school disaster in United States history, it changed how gas is used. In fact, as a result of the disaster, the state and then the federal government passed laws known as "odorization laws". Laws were passed to require manufacturers to add "distinctive malodorants" which are mixed in all gas for commercial and industrial use. This is now done so that people could be warned by the smell of escaping gas, something that we once weren't able to do in all cases.

As for the thirty surviving seniors there, they are said to have finished their year in temporary buildings while a new school was being built. Wisely, the new building focused primarily on safety. In fact, it's said that safety was the builders key concern. So much so, that the desire to inspire students to a higher education was seen as not a priority. 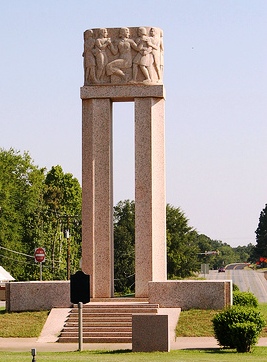 In front of the school is a cenotaph made of Texas pink granite. It was erected in 1939 and dedicated to those lost during the disaster.

As for the town of New London, it grew during the oil boom. As with many towns and cities during World War II, it sent it's men off to war while doing its part on the home front. During the 1950's, the East Texas oilfield began to decline and soon enough drilling was replaced. Care and maintenance of pipelines and pumps became the norm.

In 1963, New London, Texas, became incorporated and began providing municipal services. By 2000, its population was about a thousand people. Their small town supports over twenty businesses while catering to families and retirees who want to live in a quiet rural town that has a rich history all of its own. All in all, I think New London, Texas, would be a great place to live.