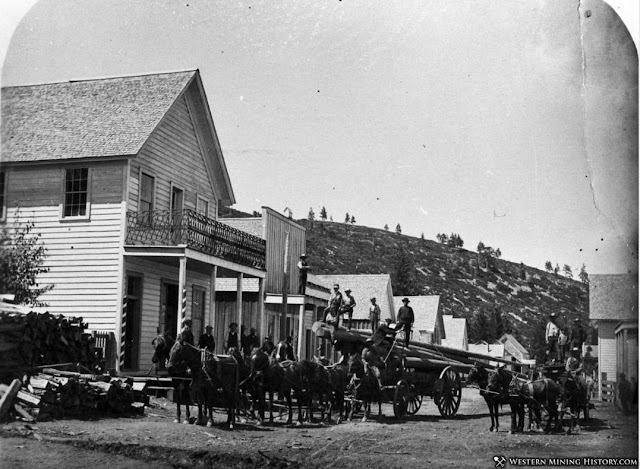 I was recently talking with a friend about the town of Johnsville, California. Located in Plumas County. At an elevation of 5,180 feet, the old town sits in the heart of what is today Plumas-Eureka State Park. In fact, it actually became a part of the state park back in 1959.

As for the name Johnsville, it was made official in 1876 when the town was named after William Johns who was the well respected manager of the Plumas-Eureka mine there at the time.

The mining town of Johnsville was the site of a gold strike in 1849. That made it one of the earliest discoveries of gold in California when the rush was just getting started. Fact is, the folks there were placer mining in 1849. Then in 1851, the Eureka vein was discovered and the town boomed. And while the value of the total output of that mining district is really unknown, some believe the production of that area to be somewhere between $10 million and $20 million worth of gold.

Let's keep in mine that we're talking about 10 to 20 million dollars worth of gold at about $26 an ounce. So knowing that, just imaging how much gold was recovered from that area? Yes, tons!


Besides mining, the area was a well-known early-day "snowshoe" or ski resort area. And while we are all too familiar with the California wildfires in the news these days, we all hear them taking place these days in just about everywhere in California, such fires are really nothing new to California. The area of Johnsville is said to have been it with a number of disastrous fires.

Of course, as with most other mining towns, when the mines petered out, the people left. Today, the town of Johnville has a population of 20. That makes it an official ghost town.

Mormon Island, California, is another little know ghost town that was once a mining town. Located in Sacramento County, it was named Mormon Island because of the large number of Mormon miners looking for gold in the American River during the California Gold Rush.

The story of their gold discovery is interesting because they stumbled on it. That took place in March of 1848 when a couple of members of the Mormon Battalion left Sutter's Fort to hunt deer. The story goes that they stopped on the south fork of the American River to fill their canteens when they found gold.

Supposedly, they told others about what they found when they returned to the fort. Well, as anyone can imaging, it didn't take long for almost 200 Mormons and others to return to where that gold was found. Soon enough, that area became known as Mormon Island. And really, one of the reasons that this find is so interesting is because that was the first major gold strike in California after James W. Marshall's initial discovery of gold at Coloma.

As for the town of Mormon Island? Well, the population boomed to 2,500 by 1853. It's said that there were four hotels, three dry-goods and five general stores, it had an express office, a blacksmith's shop, two livery stables, a number of restaurants, and other small shops there. Supposedly, the first actually Ball to take place in Sacramento County was held there on December 25, 1849.

As with Johnsville and other towns in the Old West, including Dodge City and Tombstone, a fire ravaged the town. For Mormon Island, their fire hit in 1856. Sadly, unlike Dodge and Tombstone, the town was never rebuilt. Technically, the town didn't have enough people left there not to call it a ghost town.

Then when the Folsom Dam Project was started in the late 1940s, the town was flooded over. And while during droughts Folsom Lake drops to expose a few of the old structures of the town, most of the town remains underwater. Of course, there is the Mormon Island Cemetery which was relocated south of the Folsom Lake on the dry side of the Mormon Island Dam. The Mormon Island Cemetery may give people the impression that only Mormon immigrants and pioneers are buried there, but that's not the case. That cemetery also contains the re-interned remains from other cemeteries that were flooded over.

Some of the folks buried in that cemetery are from the town of Prairie City. If you've never heard of Prairie City, California, you're not alone. Prairie City was a gold-mining town that was also located  on the American River here in the Sierra Nevada foothills. Yes, it was near what is today the City of Folsom.

What happened to the town of Prairie City? Well, when the mining petered out, the town simply died. It went from a town of hundreds to just a few within a 30 to 40 year span. Then in the early 1900's, what was left of the town is believed to have been covered in river rocks from gold dredging of the American River.

The town itself was forgotten until the construction of a freeway on-ramp began on Highway 50 in Folsom. During the moving of earth during the construction of that on-ramp, bodies were unearthed. Soon enough, a lot of bodies were unearthed. Though the names of those people are known only to God, it's believed that those folks were residents of Prairie City.

Their skeletal remains were re-interned at the Mormon Island Cemetery. Today, the only note that Prairie City itself ever existed is an off-ramp in Folsom known as Prairie City Road. It leads to a Folsom subdivision named Prairie Oaks which is believed to be where the old town once stood.

For me, I find it interesting that not all ghost towns are easily found such as is the case of Johnsville located out in the wilderness of Plumas-Eureka State Park. I also find it interesting that some old towns only make an appearance now and then during a drought after years of sitting under some lake or reservoir. Then there are those towns that may have simply been plowed over, paved over, or simply blown away by the elements of time. For them, I can only wonder about the people who lived and died there.