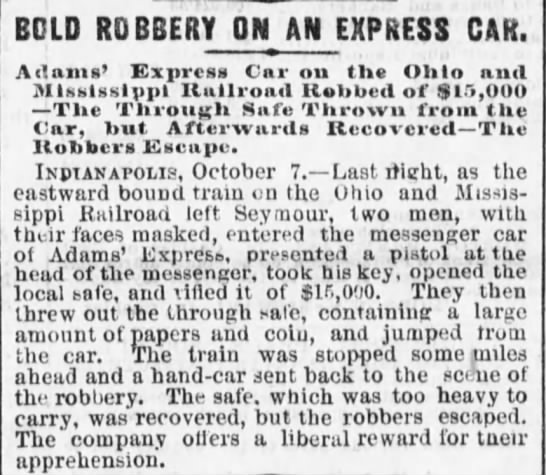 While I've never considered Indiana a part of the West, certainly not the Old West, there is no denying that the first post-Civil War train robbery in the United States took place in Indiana on October 6th, 1866. It was accomplished by none other than the now-famous Reno Gang. This newspaper clipping above was published a couple days later. It gave an account of the robbery:

BOLD ROBBERY ON AN EXPRESS CAR.

Adams' Express Car on the Ohio and Mississippi Railroad Robbed of $15,000 The Through Safe Thrown from the Car, hut Afterwards Recovered The Robbers Escape.

INDIANAPOLIS, October 7 -- Last night, as the eastward bound train on the Ohio and Mississippi Railroad left Seymour, two men, with their faces masked, entered the messenger car of Adams' Express, presented a pistol at the head of the messenger, took his key, opened the local safe, and rifled it of $15,000. They then threw out the through safe, containing a large amount of papers and coin, and jumped from the car. The train was stopped some miles ahead and a hand-car sent back to the scene of the robbery. The safe, which was too heavy to carry, was recovered, but the robbers escaped. The company offers a liberal reward for their apprehension.

The Reno Gang that was responsible for pulling off that heist was also known as the Reno Brothers, the Reno Brothers Gang, and even the Jackson Thieves. I found it interesting that the short-lived gang of outlaws actually had their start in 1864, while the Civil War was still going on.

While Hollywood has portrayed them as Confederates stealing from wealthy Northern bankers in more than one B-Western, the Reno brothers were Yankees. After the war, those Yankee badmen operated in what we know today as the Midwest. And while most know the Reno Gang as train robbers, it's interesting that the gang also dealt in counterfeiting, thievery, and even murder-for-hire. Some sources say they were one of the first murder-for-hire gangs in Indiana.

Though they were not around very long, unlike other outlaw gangs, the law had very little to do with breaking up the Reno Gang. The fact is they were stopped because citizens had enough of their lawlessness. It's true. Citizens formed vigilante groups. They are said to have lynched ten of the gang in 1868. And that, well that pretty much broke up the gang. Frankly, as we all know, necktie parties have that effect on criminals.
As for those in the vigilante groups who lynched the Reno Gang's members, it's interesting that no one was ever identified or ever prosecuted in connection to those lynchings. Of course, another interesting fact about the Reno Gang is that most of their stolen money was never recovered. Imagine that.
Tom Correa