The Wreck of the Sir John Franklin 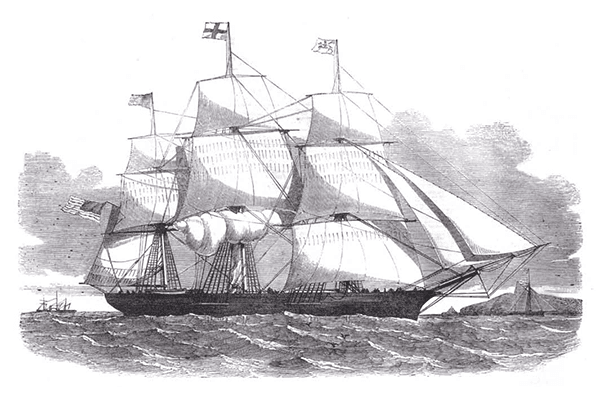 On November 8, 1864, President Abraham Lincoln was re-elected president of the United States. On November 16, 1864, General Sherman's Army of Georgia began the "March to the Sea"

On December 10, 1864, Sherman's Army of Georgia arrived at Savannah, Georgia, completing the famous "March to the Sea". At Savannah, his troops take Fort McAllister and force Confederate defenders to evacuate the city. By December 16, 1864, the Battle of Nashville, Tennessee ends when the Confederate Army under the command of Gen. John Bell Hood is thoroughly defeated.
On January 15, 1865, Union forces assault and capture Fort Fisher, North Carolina. Union occupation of this fort at the mouth of the Cape Fear River closes access to Wilmington. It is the last Southern seaport on the East Coast that was open to blockade runners and commercial shipping.
On January 17, 1865, a geographic name change takes place on a cape between Pigeon Point and Point Año Nuevo on the California coast. Early charts labeled the cape as "Middle Point." After January 17, 1865, it will be known as "Franklin Point" because the American clipper ship Sir John Franklin wrecked there. Today, Franklin Point is part of the Año Nuevo State Reserve in San Mateo County, California. The point is named after the clipper ship Sir John Franklin.
The American clipper ship Sir John Franklin was known to make a regular run along the West Coast. es, even during the days of the Civil War, it routinely ran cargo between South American ports and San Francisco, California. In January of 1865, the ship was bound for San Francisco after taking on cargo in Rio de Janeiro, Brazil. By the time it reached the California coast, it found itself in mercilessly dense fog and fighting heavy seas with a full cargo of lumber, pianos, coal oil, candles, other dry goods, and 300 barrels of "spirits." Its Captain, John J. Despeaux, believed his ship was further out to sea and away from the coast. Then almost instantly, it violently ran aground on the rocks on the point which would forever after bear its name.
The Daily Alta California (San Francisco, CA), January 19, 1865, p.1, col.2. reported:

DISASTROUS SHIPWRECK AND LOSS OF LIFE—THE SHIP "SIR JOHN FRANKLIN" LOST—THE CAPTAIN AND ELEVEN MEN DROWNED.
First Officer Boyd, of the American ship Sir John Franklin, arrived in this city last evening from Pigeon Point, between thirty and forty miles south of Point Lobos, where the ship went on shore in the fog on Tuesday night. He reports the vessel and cargo a total loss. His statement is that owing to the prevailing fog no observation had been taken for twenty-four hours, and it was supposed that the vessel was about seventy miles off land.
She was standing in shore, and about nine o'clock, when the fog lifted, it was discovered that she was close in on the breakers. Orders were given at once to wear ship, but before they could be carried out, she struck with great violence on the rocks, outside the bar, staving her bottom and carrying her masts overboard. In a few minutes after striking, the vessel parted amid-ships and the cargo went out of her. The wreck floated over the rocks and went ashore on the beach, the sea making clean breaks over her.
When she broke in two, Captain Despeaux and the crew, twenty in all, were standing near together, amidships, with the exception of two men on the forecastle, and all clung to the vessel until it struck the beach. Then they commenced washing overboard, the undertow carrying them out from the land repeatedly, and after being nearly two hours in the water, struggling among the drift and pieces of the wreck and cargo. First Officer Boyd, Second Officer Ball, Third Officer Jefferson Welch and five seamen, gained the shore alone, all the rest having perished.
The survivors wandered on the shore for some hours, wet, and nearly perishing with cold and exhaustion, before reaching a farm-house, where they were cared for as well as circumstances would permit. The survivors, with the exception of Mr. Boyd, remained at the farm house last evening, having no means of coming up to the city save by footing it.
The Sir John Franklin was owned by Lambert Gidden of Baltimore, and was rated as a first-class ship. She was loaded, in part, with the cargo of the ship Charles Pennell, which put into Rio in distress and was condemned, and in part with general merchandise, consigned to Brooks & Co.
Captain Despeaux was a native of Baltimore, and leaves no family. Mr. Boyd believes that the ship and cargo were insured, but it is not positive of the fact. This in the second disastrous shipwreck in that locality, the Carrier Pigeon having left her frame and name there some year since.
Records report that the Pacific Ocean ruthlessly beat the ship to death. Its cargo gone, it destroyed, and with its Captain and eleven men killed, it sat at the mercy of the Pacific. When help arrived to assist, only 8 of the ship's crew were found alive. Of the rest of the crew, only six of the bodies of the victims were recovered. Of the original 20-man crew, 8 survived and 12 drowned. And think about this, only four seamen, the Captain, and another officer were found.
The Daily Alta California (San Francisco, CA), 23 January 1865, p 1, col 2., reported:

Captain J. W. Sayward, who left the wreck of the Sir John Franklin on Saturday evening, informs us that up to that time six bodies had been recovered, and an inquest had been held by the Coroner of Santa Cruz county.
Imagine for a moment, that of the 12 that drowned, that includes the ship's Captain. Only six of the victims were recovered for burial. And here's more, when their bodies came ashore, it was local Portuguese whalers who buried the four seamen on that point. And while the four crewmen were buried right there on the point, the bodies of Capt. Despeaux and another officer were not -- and instead were taken to San Francisco.
So now you're wondering why the Captain and the other officer were taken to San Francisco instead of being buried with the others? Well, believe it or not, that has to do with the 300 barrels of booze. Hours after the Sir John Franklin struck the rocks, word of her being battered and beaten by the waves was telegraphed to San Francisco newspapers and the Merchants' Exchange in that city.
Merchants and saloon owners immediately realized that its cargo of 300 barrels of "spirits" may still be salvaged. So they assembled several local militia groups. They armed themselves and made the march to where the Sir John Franklin lay stranded and being broken. To their disappointment, the precious cargo of booze mysteriously disappeared by the time the San Francisco militias arrived.
On their return, the San Francisco militias transported the bodies of 47-year-old Captain John J. Despeaux and the other ship's officer with them. As for Captain Despeaux, by late October, he was transported by rail to Baltimore, Maryland where he was buried near his home in Green Mount Cemetery. The ad-hoc cemetery where those Portuguese whalers buried the four crewmen in the sand dunes became what is known today as the Franklin Point Cemetery. And yes, the story of that cemetery in the sand is coming up next.
Tom Correa
Posted by Tom Correa at 12:28 AM