His Name Is August Landmesser 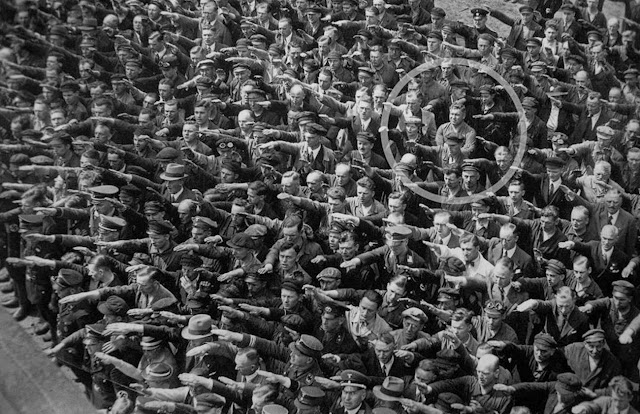 He was born May 24th, 1910, and died on October 17th, 1944. He was a shipyard worker at the Blohm Voss Shipyard in Hamburg, Germany, in the 1930s and into the 1940s. Yes, during World War II. He's in one of my favorite historical photographs ever taken. He is best known because, in that photo, he refused to perform the Nazi salute at the launch of the naval training vessel, the Horst Wessel, on June 13th. 1936.
It's said that he had problems with the Nazi Party. But in reality, the Nazi Party had a problem with him since they did not approve of his "unlawful" relationship with Irma Eckler, a Jewish woman.
He was later imprisoned and then forced to work as a laborer in the Nazi military war machine, then the German Army. He was killed in action. Irma Eckler was sent to a concentration camp where she was killed. Some will write to tell me that he too joined the Nazi Party in the 1930s. But people today forget that our Great Depression was felt all over the world, and in 1931, he did in fact join the Nazi Party as a way to get work. Yes, just as others did, he too hoped it would help him get a job.
And just like many others at the time, he didn't know what he was doing when he joined the Nazi Party. We forget that the Nazi Party in 1931 was really no different than any other political party. In 1931, there were few in Germany who knew what the Nazi Party would become.
Of course, people belonging to a political party with the most clout is nothing new in human history. During hard economic times, people used whatever sources were available to find a job. Joining political parties and other associations was seen as helpful to that extent. The problem comes about when one realizes that those perks were in reality all about making a deal with the Devil.
In 1935, August Landmesser became engaged to Irma. Because of the Nazi hatred for the Jewish race, August was expelled from the Nazi Party. The couple registered to be married in Hamburg, but the Nuremberg Laws enacted a month later prevented it.
Love being the motivator that it is, the Nuremberg Laws forbidding the marriage of mixed races didn't stop the course of nature. So, they were married. And on October 29th, 1935, August and Irma gave birth to a daughter. They named their daughter Ingrid.
By 1937, August and Irma tried to flee with their child to Denmark. But they were apprehended and returned to Hamburg. She was again pregnant, and he was charged under Nazi racial laws. He was found guilty in July of 1937 of "dishonoring the race."
August argued that neither he nor Irma knew that she was fully Jewish and was acquitted on May 27th, 1938, for lack of evidence. But, they were only acquitted with the warning that a repeat offense would result in a multi-year prison sentence.
The couple may or may not have thought the threat from the government had passed. But either way, they publicly continued their relationship as a husband and wife with a child. This came to a stop on July 15th, 1938, when August was arrested again. This time he was sentenced to two and a half years in the concentration camp Börgermoor.
While August was imprisoned in that concentration camp, Irma was detained by the Gestapo and held at the prison Fuhlsbüttel, where she gave birth to a second daughter, Irene. From there, she was sent to the Oranienburg concentration camp, the Lichtenburg concentration camp for women, and then the women's concentration camp at Ravensbrück.
Meanwhile, August was released from prison on January 19th, 1941. He worked as a foreman for the haulage company Püst. The company had a branch at the Heinkel-Werke factory in Warnemünde. A few letters came from Irma Eckler until January of 1942. It is believed that she was taken to the Bernburg Euthanasia Center in February of 1942.
In February 1944, August was forced into the Nazi military in a "penal battalion," the 999th Fort Infantry Battalion. He was declared missing in action, then killed in action, after being killed during the fighting in Croatia on October 17th, 1944.
In the course of examining documentation in 1949, after the war, Irma was pronounced legally dead with a date of April 28th, 1942. She was among 14,000 killed at the Oranienburg concentration camp. Like Irma, August Landmesser was legally declared dead in 1949. The marriage of August Landmesser and Irma Eckler was recognized retroactively by the German government in the summer of 1951.
As for their children, their children were initially taken to the city orphanage. Ingrid was later allowed to live with her maternal grandmother while Irene went to the home of foster parents in 1941. In the autumn of 1951, Ingrid assumed her father's surname Landmesser. Ingrid was also placed with foster parents after her grandmother's death in 1953. But as for Irene, it is believed that she continued to use her mother's surname, Eckler.
Their father, August Landmesser, is featured in the photograph taken on June 13th, 1936, published on March 22nd, 1991, in Die Zeit. 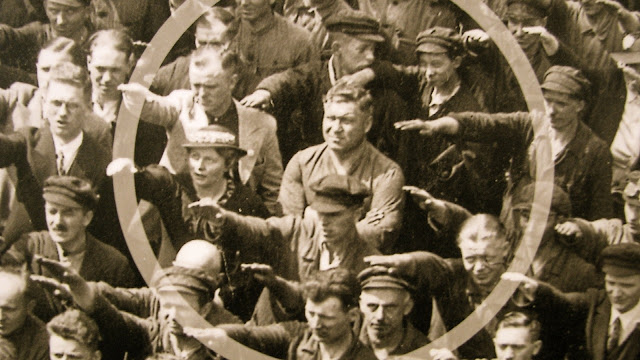 As one can clearly see, it shows a large gathering and all there with raised arms in the Nazi salute. The most obvious exception is that of August Landmesser, who defiantly stood with his arms crossed over his chest. Several others have also refrained from saluting but are not so obviously defiant.
There are so many lessons that we can learn from this. Obviously, being defiant in the face of an adversarial government is admirable. And yes indeed, that is one lesson here. But the bigger lesson is not allowing a central government, be it the Communist Party throughout their rule in the Soviet Union, the Nazi Party, or any Fascist Socialist government, even that disguised as a democratic government, to have so much power that they have the power to rule instead of governing their nation. When a nation is ruled by the government, the people are subjects. When a nation is governed, the people are citizens.
Tom Correa
Posted by Tom Correa at 12:51 AM