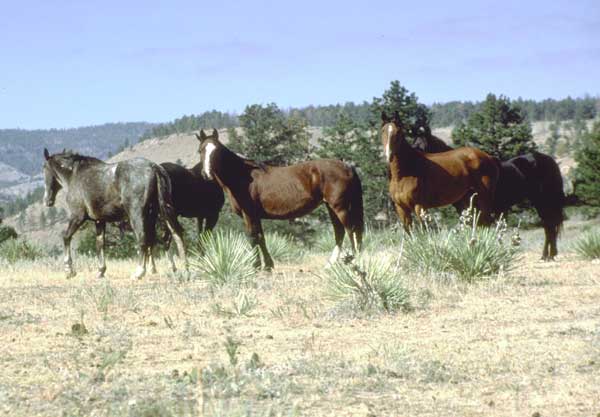 On April 28, 2022, the Bureau of Land Management announced tests determined an equine influenza virus caused the mysterious respiratory disease that killed at least 95 wild horses and forced a federal holding facility in Colorado to go under quarantine. The BLM report did state that the virus is "not uncommon" among horses.

The BLM conducted tests that showed that a strain of the virus, known as H3N8, was likely the cause of the outbreak and related horse deaths. The BLM issued the following statement:

CAÑON CITY, Colo. – An equine influenza virus that is not uncommon among both wild and domestic horses has been identified as the likely cause of the respiratory disease outbreak and associated mortality that is occurring at the BLM’s Wild Horse and Burro Corrals located on the Colorado Department of Corrections (CDOC) East Canon Complex in Canon City, CO. Positive polymerase chain reaction (PCR) laboratory test results from two leading veterinary diagnostic laboratories in the United States identified the virus in nasal swabs and lung tissue from several horses.

The PCR testing has also identified two equine herpes viruses (EHV-2 and EHV-5) but these commonly occur in normal, healthy horses, and it is unclear to what extent these may also be contributing to the severity of the clinical signs observed in the more severely affected group of horses at the facility.

More typical mild clinical signs of influenza are also being observed in approximately 10-20 percent of the other 2,184 horses at the facility that are not from West Douglas. No mortality has occurred in the larger groups of horses. The West Douglas horses were gathered in an emergency operation in 2021 following a wildfire that impacted their habitat. As of today, April 28, 95 horses have died at the facility since April 23.

“The Bureau of Land Management will review operations at the Canon City facility to prevent future outbreaks like this from occurring,” said BLM Colorado Acting Associate State Director Ben Gruber. “This tragic outcome was influenced by a population of horses that may have been particularly vulnerable given their time in the West Douglas area and their exposure to last year’s wildfire that prompted their emergency gather.”

“This unfortunate event is being taken very seriously by the Department of Corrections and the BLM,” said CDOC Executive Director Dean Williams. “We are working in coordination to mitigate the spread of the virus and identify and prevent any potential risk which could lead to future similar events.”

BLM continues to work with the attending veterinarians on the scene as well as the diagnostic laboratories, veterinarians, and epidemiologists from the US Department of Agriculture and the Colorado State Veterinarian’s Office to investigate and mitigate the factors that may be contributing to the most severe cases and prevent further spread of the disease.
The facility remains under a voluntary quarantine with no horses allowed to leave the premises at this time and for the foreseeable future until it has been determined that the animals are again healthy and pose no risk to the domestic equine population in the community.

The veterinarian report and additional information can be found online at https://www.blm.gov/programs/wild-horse-and-burro/herd-management/herd-management-areas/colorado

The BLM manages more than 245 million acres of public land located primarily in 12 western states, including Alaska, on behalf of the American people. The BLM also administers 700 million acres of sub-surface mineral estate throughout the nation. Our mission is to sustain the health, diversity, and productivity of America’s public lands for the use and enjoyment of present and future generations.
-- end of BLM statement.
The BLM is in charge of caring for America's wild horses and announced that the outbreak had taken place when at least 57 horses had died in Cañon City, Colorado, located more than 100 miles south of Denver. Four days after the announcement, that number had reached 95.

According to reports, that is the second time between late March and the middle of April that the BLM had to shut down a wild horse facility because of a widespread illness among its horses. In March, a BLM wild horse facility in Wyoming was also closed because some animals developed "Streptococcus Equi."
Streptococcus Equi is the bacterium that causes a disease in horses known as "strangles." Most horse owners know that "strangles" is primarily an upper respiratory infection.  It is characterized by swelling of the lymph nodes and the formation of abscesses, primarily in the head and neck. Disease severity varies and younger horses often exhibit more severe clinical signs than older horses. Strangles is a highly contagious bacterial disease among horses.
Tom Correa
Posted by Tom Correa at 8:36 PM