The Scalping of Josiah Pugh Wilbarger 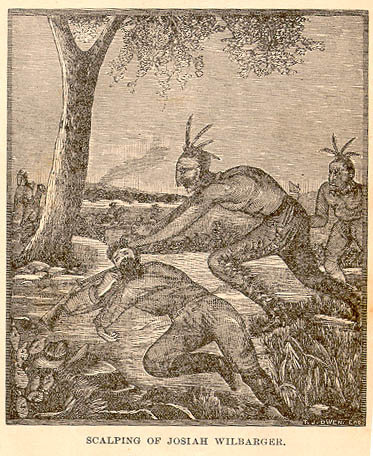 Josiah Pugh Wilbarger was born in Rockingham County, Virginia, in September of 1801. His family moved to Kentucky when he was age 17 and then to Missouri by the time he was 22-years-old. It was there in Pike County, Missouri, that he met and married Margaret Barker in 1827. Late that same year, the couple moved to Mexican Texas. They first moved to what is today Matagorda, Texas, located between Galveston and Corpus Christi. Josiah was a teacher there for about a year before the couple moved to La Grange and then onto Stephen F. Austin"s "Little Colony" of Bastrop, Texas.

Bastrop's name is interesting since it was named after a man from the Netherlands that was on the run for embezzling funds in his native country. His name was Felipe Enrique Neri, Baron de Bastrop. His importance to this story is that he is the man who helped Moses and Stephen F. Austin get their Spanish land grants. So yes, it's understandable why they would name the town after him.

As for Josiah Wilbarger losing his scalp, that happened in August 1833 when he was a member of a survey party. He and three others were attacked by a Comanche war party about four miles east of present-day Austin, Texas. Of the four, two were killed and scalped by the Comanches. Believe it or not, Josiah Wilbarger was scalped but left for dead. The last man was able to get away to tell the tale of what took place. I couldn't find out his name, but it's a safe bet to say that he would be shocked later to find out that Josiah survived.

This is where legend and facts get a little mixed up, but let's go with the legend since no one knows exactly what happened. It is said that Josiah Wilbarger survived by crawling into a nearby stream and there washing his wounds. According to legend, though thought dead, the Indians who took his scalp didn't know he would survive.

So being weak from his loss of blood, way too weak to make it to Hornsby Bend for help, it's said that he decided to wait until he was found. It's true. In a land where people were sparse at best, he decided to prop himself against a large tree and wait to be found. It's believed that Josiah Wilbarger figured out that he was just too weak to make it to the closest homestead, which was that of Reuben Hornsby's who was an early Texas pioneer.

It's said he was sitting there for several hours, lapsing in and out of consciousness. Legend says, and many like to think that this really happened and that he wasn't simply hallucinating, that during that night, he dreamed of his sister, Margaret Clifton. His sister Margaret didn't live in Texas. She actually lived in Missouri at the time. But, that didn't stop him from dreaming of her while lapsing in and out of consciousness. He later said she appeared to him and said, "Josiah, stay where you are, and your friends will come and get you."

Reuben Hornsby actually worked for Stephen F. Austin as a surveyor. Hornsby was one of the first settlers in Travis County. He and his wife Sarah Morrison immigrating to Texas in 1830. They settled in Austin in 1832, living just east of Austin along the Colorado River in the area known as Hornsby Bend. It is said that Hornsby Bend was given to Hornsby by Stephen F. Austin as payment for surveying the area.

During that night when Josiah dreamed about his sister, Reuben Hornsby's wife Sarah dreamed that Josiah Wilbarger was wounded and bleeding but still alive. Legend says she woke her husband Reuben to tell him what she had seen in her dream, but he told her, "it is just a dream, Sarah, go back to sleep."

Thinking he was right, Sarah went back to sleep only to again dream that Josiah was hurt, bleeding, but still alive. With that, she got up and prepared breakfast for her husband. It's said she was determined to send her husband and the other men off at first light to search for Josiah and bury anyone who had been killed. And, believe it or not, legend says that Sarah gave her husband an accurate description of the oak tree that Josiah propped himself up against.

Josiah was still alive when he was found the next day by Reuben Hornsby and the others. Some say he was almost naked when he was found. The search party then located the two other surveyors who were killed and buried them. They took the dying Josiah Wilbarger to Hornsby's home for treatment.
It's said that while Josiah Wilbarger never completely recovered from his wound, he did, in fact, live for eleven more years. And, as remarkable as it sounds, he served in the fight for Texas Independence. I believe he rose to the rank of Colonel during the fight for Texas Independence.

So how did he die? Well, at the time of his death, eleven years after his scalping, he actually died from an infection of the area where he had been scalped. It's said that he sadly died at his home after he accidentally hit his head on a low-hanging support beam inside his cotton gin. He was only 44 years old when he died on April 11, 1845, right there in Bastrop because his exposed skull became infected.

Wilbarger was a living legend because he survived being scalped by the Comanche in 1833. Along with that and his service to Texas, he gained a unique place in Texas history. While he was originally buried near his home in Bastrop, because he was a veteran of the Republic of Texas, he was reinterred in Texas State Cemetery in 1936. Today, Wilbarger County, Texas, is named in honor of Texas pioneer Josiah Pugh Wilbarger.
Tom Correa
Posted by Tom Correa at 10:57 PM