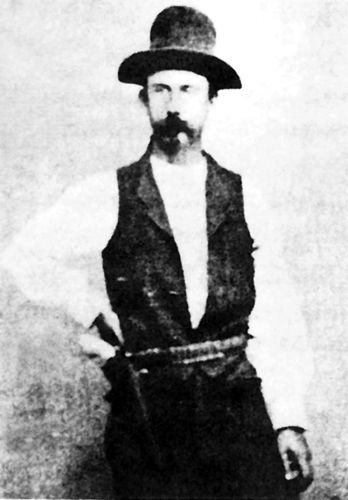 Was William Brooks known as "Buffalo Bill" in his late teens? Was he a town marshal of Newton, Kansas? Was he the gunslinger that some say he was? Was he framed for a crime when he was lynched?
Some of the mystery surrounding William Brooks starts at his birth around 1832 somewhere in Ohio. From everything that I've looked at, 1832 is the year that is claimed as the year he was born. As for where? Well, all I can find is somewhere in Ohio. While there may be genealogists who know more than that, I can't seem to find that out.
As for what he did during his life, that seems to be a mystery as well. Frankly, from what I've read, no one really knows what he did for most of his life. It is believed that by the late 1840s and early 1850s, in his late teens and early 20s, that he was a buffalo hunter supposedly known as "Buffalo Bill."
As for the moniker Buffalo Bill, it seems that more men than simply famed showman Buffalo Bill Cody made a claim to that handle. Of course, just as there is no supporting evidence for his being called Buffalo Bill, there isn't any evidence to support the claims that he supposedly killed several men during the late 1860s and early 1870s. And no, I can't find if he ever served for the Union or Confederacy during the Civil War.
While this all sounds like a mystery, there are a few things that we know about this man. For example, according to the Newton, Kansas, Police Department:
In February 1872, Newton was incorporated as a Third Class city. William Brooks, a stage coach driver, was appointed the first City Marshal of Newton. He resigned in June 1872 after being shot.

Newton's early days were filled with violence and bloodshed. Newton was described as "the toughest, loudest and most dangerous spot in the West."

This list was obtained from various sources and is believed to be complete. Service overlap is due to the various sources providing different names or dates. These sources also provided differing numbers of Chiefs/Marshals, so all persons found designated as such are included in this list. Sources used were clippings from the Newton Kansan and information compiled about the City of Newton located in the Newton Police history books and archives.

Officers listed with an * in 1871 were appointed as the "Night Policeman" prior to the City of Newton being incorporated. William S. Brooks was the first official City Marshal.