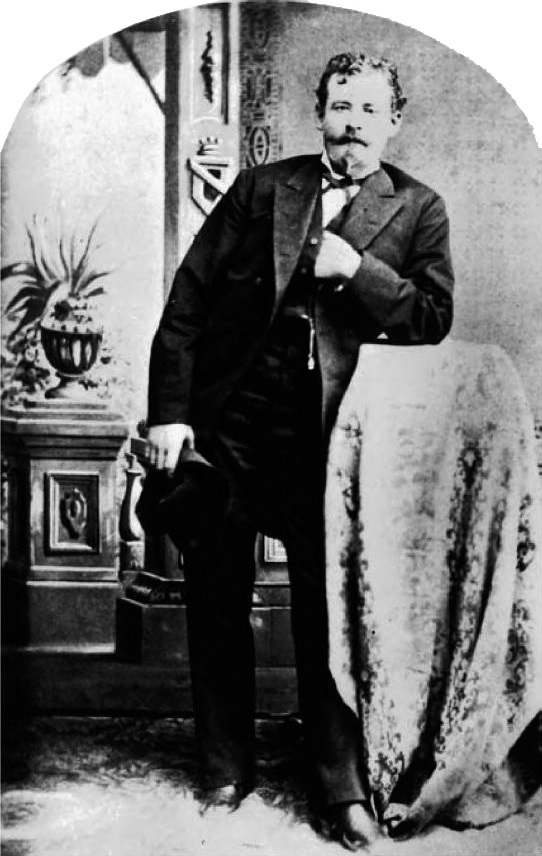 I posted Wyatt Earp's unedited statement in the Preliminary Hearing before Judge Wells Spicer a few days ago. In his statement, he recounts encounters with the Clantons before the shooting near the O.K. Corral and what he believed took place on the day of the gunfight.
So that you can compare his statement to Ike Clanton's statement, below is Ike Clanton's unedited statement in the Preliminary Hearing before Judge Wells Spicer as it appeared in the Tombstone Daily Nugget, CORONER'S INQUEST, Oct. 30, 1881.
Joseph I. "Ike" Clanton, a cattle dealer, testified that he was in Tombstone on October 26, 1881, and was the brother of William Clanton who was killed. Clanton describes encounters with Doc Holliday and the Earp brothers before the gunbattle and then recounts his version of what took place.

"I am a cattle dealer; was present on the 26th of the month, and am a brother of William Clanton who was killed on that day, saw the whole transaction, the killing; well, the night before the killing went into the Occidental lunch saloon for a lunch; while in there Doc Holliday came in and raised a row with me; was abusing me; he had his hand on his pistol; called me a s--- of a b---; he told me to get my gun out; I told him I had no gun; I looked around and saw Morgan Earp behind him, they began to abuse me, when I turned and got out doors; Virgil Earp, Wyatt and Morgan were all up there, Morg Earp told me if I wanted to fight to turn myself loose; they all had their hands; I told them again that I was not armed.

Doc Holliday said, 'You s--- of a b---, go and arm yourself; I did then go and arm myself; I went back, saw V. Earp and T. McLowry; Virg Earp was playing poker with his pistol in his lap; we were playing poker, we quit at daylight; I followed him and said, 'I was abused the night before, and was still in town,' he said he was going to bed; the reason I followed him up was I saw him take his pistol out of his lap and stick it in his pants; I came back and passed in my chips; staid around until about 8 or 9 o'clock;

I Staid to meet Doc Holliday;

The next thing they, Virg and Morg Earp, slipped up and disarmed me; shortly after I met my brother; he asked me to go out of town; just then I met the man that had our team; I told him to harness up; then I went to get something left by my brother.

We then went to where our team was; met the sheriff there; he told us that he would have to arrest us and take our arms off. I told him that we were just going to leave town; that I had no arms on me; he then told Billy, my brother, to take his arms up to his office, Billy told him he was just leaving the town; the sheriff then told Frank and Tom McLowry to take their arms off.

Tom McLowry then opened his coat and said, 'Johnny, I have nothing.' Frank said that he was leaving town, and that he would disarm if the Earps would; that he had business that he would like to do before he left town. Just at that time Doc Holliday and the Earps appeared on the sidewalk; the sheriff stepped out to meet them; he told them that he had this party in charge; they walked right by him.

I stepped out and met Wyatt Earp; he stuck his - six shooter at me and said, 'Throw up your hands!' The marshal also told the other boys to throw up their hands; Frank McLowry and Billy Clanton threw up; Tom McLowry threw open his coat and said he had nothing; they said you's s--- of b---s came here to make a fight; at the same instant Doc Holliday and Morgan Earp shot; Morgan shot Billy Clanton, and I don't know which of the boys he shot; I saw Virg shooting at the same time; I grabbed Wyatt Earp and pushed him around the corner and then ran through the photograph gallery; at the same time I saw Billy Clanton fall; when I got away.

ALL OF US THREW UP OUR HANDS,

Except, Tom McLowry, who threw open his coat, saying he had nothing. There was some trouble between myself and the Earps prior to this; there was nothing between the other boys and the Earps; Doc Holliday had said that I had used his name; I said I hadn't; I never had any trouble with the Earps; they don't like me; we once had a transaction, myself and the Earps; I know of no threats made by the Clantons and the McLowrys that day; I made no threats, only as I formerly said; they, the Earps, met Billy Clanton 15 minutes before they killed him and shook hands with him and said they were glad to meet him; Billy Clanton and Frank McLowry were only half an hour in town; I might have made threats as said, as I felt that way, I made no worse threats then they did with me; I didn't expect Wyatt, I expected

MORGAN AND DOC HOLLIDAY TO ATTACK ME;

Our crowd did not expect an attack until some one told us; at the time they made the attack I had no arms; the Earp brothers had my arms; Virg Earp had them; it was a six shooter; It was two days prior since I saw Billy or Frank McLowry until that morning; had never had a word of conversation with either of them in my life; I don't know whether the party had a shotgun; Virgil Earp was about six feet from me; they were three or four feet distant when, they fired; I did not see my brother or either of the McLowrys fire a shot.

There were four or five shots fired before I left the ground; at the time the Sheriff was talking to us; Billy Clanton and Billy Claiborne were standing together; the McLowrys and myself were standing five or six feet to the left; the Clantons came up from Antelope Springs for a load of freight, that is, the McLowrys; I don't know how near Claiborne was to me at the time of the shooting.

I don't know whether Morgan Earp or Doc Holliday fired first; It was a nickel-plated pistol by one of them; their weapons were down when they came up; the Sheriff, after he had orderred us to give up our srms I did not think we were under arrest; he said it was all right if we left town; Behan had a conversation with Frank McLowry; I know where the Sheriff's office is, we could not have gone up to the Sheriff's office after he left us before the Earps came up; the Sheriff told us to stay where we were until he came back; I would not have staid there had I not orders from the Sheriff; after I saw the Earps armed; the Sheriff was with us about four, five or six minutes.