The Great Epizootic of 1872 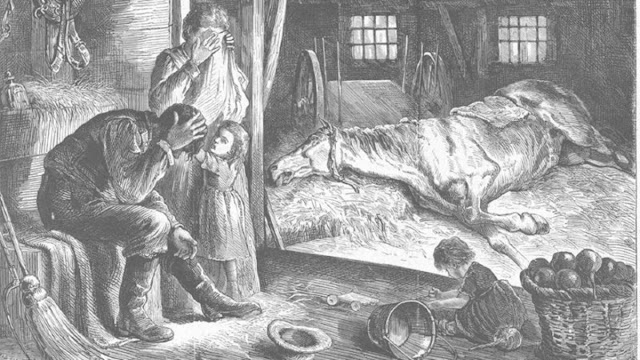 Since a few of you have asked that I make this a stand-alone article and not simply a part of a larger article, here it is.

The Great Epizootic of 1872

So now, let's talk about a mysterious illness that brought a halt to our economy in 1872. It affected thousands. It was a plague that stopped Americans from working and changed the way we lived at the time. It was really a mysterious epidemic that swept America.

As for the word Epizootic? Epizootic is an adjective "denoting or relating to a disease that is temporarily prevalent and widespread in an animal population." As a noun, it denotes "an outbreak of an epizootic disease." It is the non-human equivalent of an epidemic.

It is said that the world of 1872 ran on horsepower for a good reason. Because of how that plague affected horses, it was a plague affecting what we humans absolutely relied on at the time. Horses pulled stagecoaches, fancy carriages, carts, and even city streetcars.

Besides transportation needs, horses were also harnessed to both plow and farm equipment, move food to market, and pull boats on rivers. Horses were depended on for mail, milk delivery, ambulances, doctor visits, paddy-wagons, used by the U.S. cavalry, and, of course, to pull fire wagons to get steam-powered water pumps to the scene of a fire.

Fire engines, which were once small enough for gangs of men to pull through streets, were by then so large that they needed horses in harness to move them. Since all cities were mostly built of wood, a fire was always a constant threat. And while the Great Fire of Boston of 1872 that consumed 776 buildings was blamed on the poor response, many said it was because there were no horses available to pull fire pumps that the delay took place. Imagine the destruction of 776 buildings? Imagine the number of people that were displaced?

Every aspect of commerce in 1872 was moved by horses. Horses were essential to pulling all sorts of wagons, including supply wagons of every kind. To get an idea of their importance, horses hauled coal from mines, that coal was used by railroads and steamships. Without that coal, trains didn't move, and ships didn't sail. And of the many occupations that felt the ill effects of the epizootic, teamsters were out of work simply because they weren't needed. Yes, even corpses bound for cemeteries ended up piling up because there were no horses to pull the wagons to get them there.

The disease first struck horses outside of Toronto, Canada, in September of 1872 and then crossed into the United States by way of New York a month later in October of that same year.

What was it? It was an equine influenza epidemic, the likes of which no one saw before. And as with what happens with people who have the flu (influenza), the first symptoms are a higher than normal temperature, coughing, sneezing, loss of appetite, a runny nose, and general weakness. Yes, exactly the same as with people who have the flu. And exactly as with us, infected horses can barely stand, much less do any kind of work.

During that time, people had to resort to primitive means of using wheelbarrows to move supplies, mail, ice, and groceries. In Chicago, the main post office organized men pushing wheelbarrows to move mail to and from the train stations. In many instances, men used goats, dogs, and even milk cows as substitutes for draft horses. Imagine that. Some reports say men were hired to pull wagons and streetcars by hand. 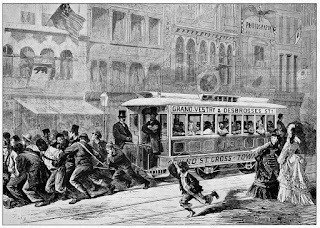 It soon became common knowledge that horses and mules and donkeys were all susceptible to being infected, but bovine such as oxen were not. With that, it didn't take long for oxen to bring premium prices. In fact, some cities were known to ship in oxen during that emergency.

Since the cities in the East were affected worse than the towns and cities out West at first simply because of exposure, it is said that cities saw tens of thousands of horses sidelined with the equine flu. Some newspapers reported that merchants are unable to get goods from the depots to stores or ship goods out.

We have to keep in mind that at that time, more than half of all Americans lived in rural areas of towns with relatively small populations, on ranches and farms. As with most epidemics, the rural areas were not affected as severely as the urban areas. At least, at first. Of course, most urban horses and mules were incapacitated for a week or two.

Cities in the East were starting to fill with listless horses that were very noticeable because they would stand with drooping heads. Most stricken horses are said to have had trouble merely staying on their feet. Those sick horses that did plod along in harness did so while others were confined for treatment in stables and livery where they most likely spread the disease to other horses there.

Part of the problem at the time is that veterinarians initially had no idea how to treat them. Many veterinarians warned against archaic treatments such as blood-letting or purging sick horses with laxatives. While that was the case for some veterinarians, other veterinarians recommended all sorts of medicines and instant cures. Some owners changed their horse diets. Others bathed their horses in disinfectants and acids. Some cures advertised in newspapers were simply harmless snake-oil no different than that sold off the back of a medicine show wagon. Others were worse and actually killed some horses. According to reports, about 1% of the animals died. The rest did fully recover.

On October 25, 1872, The New York World newspaper ran the headline, Is America to Be Horseless?

An 1872 report on equine influenza describes the disease as: "An epizootic specific fever of a very debilitating type, with inflammation of the respiratory mucous membrane, and less frequently of other organs, having an average duration of ten to fifteen days, and not conferring immunity from a second attack in subsequent epizootics."

While it was fortunate for all that the mysterious condition was rarely fatal, what became known as the "Canadian Horse Disease" became the "most destructive recorded episode of equine influenza in history."

While the Great Epizootic of 1872 swept across the country to California, mortality among the horses was relatively low, and most horses survived. Part of the success in beating that epidemic is that people learned from it and adjusted their behavior. Most owners learned that infected animals spread the disease. It became understood that one sick horse could infect an entire herd by contaminating feed and water, especially if confined in a stable or livery.

Despite the media passing along useless and even harmful information, yes, like today, most soon learned that the equine flu's most effective treatment was rest and time. As with people who realize that a cold and flu has to run it's course, the same was with the horse flu of 1872. Owners found that forcing horses that were close to recovering back to work too soon risked relapses. Most learned that giving their animals clean water and allowed them to rest would result in their recovery.

It should be noted that while conditions in Eastern cities improved, the West suffered terribly from a shortage of horses. Since towns were isolated in many cases by many miles, and the U.S. Army was adversely affected, troops who were normally mounted cavalry were forced to march and fight on foot. The vast majority of affected horses that survived were back to full health with rest. Until their horses recovered, many in the cavalry became infantry.
It's a safe bet to say those used to riding who were suddenly afoot weren't happy. I'm sure it wasn't to their liking.
Tom Correa
Posted by Tom Correa at 12:01 PM