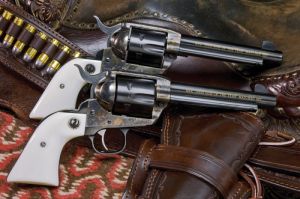 The first time that I went to a Cowboy Action Shooting match to check it out, he went with me.

While I shot that day, he didn't.

While I shot my first match, with one borrowed pistol from the president of that club, he talked with a few of the shooters and took in how everything was setup for the match.

Since he was a Range Master for many many years, he liked the way they setup each stage and the different kinds of targets they used.

They use all steel targets. Some are pop ups, some knock downs, buffalo and pig and cowboy silhouettes, grave markers, and other targets like hearts, clubs, spades, and diamonds for the 4 suits of cards. Heck, Cowboy Town even has a Mission bell there to ding away at.

Like me, he appreciated the focus on safety, the type of shooting, and the challenge of not just having to shoot paper targets. And of course, we both found out that we would have to shoot the targets in a specific order or sweep sequence.

A monthly match usually consists of 5 to 6 stages.  Usually a stage is setup to shoot two pistols with 5 rounds each, 10 rounds in your rifle, and 2 to 4 shotgun targets.  Although on Saturday, two stages had 8 shotgun targets.  And friends, that didn't bother me because I like using my sawed off.

The way it works is that we all have to engage the targets and shoot them in assigned sequences called sweeps for that particular stage.  And besides the sweep, you shoot on the clock. Shooting with a timer was new for me.

I had shot competition pistol shooting about 35 years ago in the Marine Corps at my Battalion, but it was never for time.  For me, this was a different sort of game.

At first, I have to admit that it was a bit frustrating.  Competing against others was one thing, but by time was a whole nother deal than I'd ever done.  And yes, watching some of those shooters was a little bit of a wake up call.

Some of the shooters have shot Cowboy Action Shooting for many years, shoot almost every weekend, and are fast good shooters.  If not considered fast by overall SASS standings, they are certainly fast by local standards. They were for certain faster than I was, or ever wanted to be.

Since I didn't know how things were run, I didn't know if I really wanted to try to "compete" against guys that had years more experience than I did.  Besides, it isn't as if I'm 18, with great eyes, quick faster reflexes, and no arthritis in my hands.

I remember thinking to myself after the match how frustrating it was to try to remember the sweep sequences as I shot.  It was also a little frustrating to learn how dog gone slow I was compared to others out there.  It was a little disheartening.

Looking back on it, in reality what convinced me to join SASS and subsequently keep shooting this sport took place after the match. It was after the match that a few of the folks wanted to go grab some lunch together. They asked me and my father-in-law to join them, and it was during that lunch that I realized what Cowboy Action Shooting is all about.
During lunch, I talked with the president of that club who was nice enough to had lent me one of his new Ruger Vaqueros.  His alias is Jackalope Jasper.

When he asked me how I liked it, I told him what my first impressions were.  I remember him telling me to just come out more, just have fun shooting, and to just forget that there is a competition.

I like the idea. I guess my father-in-law liked it even better, since by the end of that week he phoned me to let me know that he was going to join SASS and that he had a line on a pair of six-shooters. Heck, up until his phone call, I didn't even know he was even interested in shooting a Cowboy shooting sport.

Well by the next month, he was still getting outfitted when I returned with the thought in mind that I don't need to "compete" against anyone but instead I'm simply there to have fun.  My friends, thanks to Jackalope it was great fun.

And ever since then, well let's just say that my only competition is me.  Every time I go to a match, I do try to better my time and score. But I know full well, that I will never be a fast shooter.

As for what others think about me just coming out to shoot and have fun, well let's just say that everyone who shoots with me knows that I have fun - and I've never heard anyone complain about it.

This last Saturday, Nickel Jim and I went down to Cowboy Town which is located in the Sacramento Valley Shooting Center in Ione.  We decided to shoot with the California Rangers.

On the way down there, my day started out great as I watched the temperature gauge located on my rear view mirror change from 22 degrees here in Glencoe to a warm front of 42 degrees in Ione.

It was a big deal to see nice shooting weather when our weather up here has been so lousy lately. Our home club, the High Sierra Drifters, shoots in Railroad Flats which is about 2800 foot elevation.

It's not so much the cold and the wind chill that I don't like so much. It is the mud and snow at the range that is the pain in the backside.

If we can get in at all, then it's tough on our gun-carts to get around. Of course there is also the fact that you have to set up the steel targets, and doing it in the mud can be a real bear for the guys getting the stages ready.


Down there in Cowboy Town, the clubs that use that range have worked to put together an Old West Town that is absolutely beautiful.  They have a Jail, a Livery, a Hotel, a Bank, a Cantina, and General Store to shoot from. Each building has a boardwalk and overhangs to shoot under.


I remember going down there a couple of years ago to help out with a work party after a bad storm wrecked havoc on the range, but it has certainly come a long way since then. It is downright beautiful!

On Saturday, the California Rangers broke into two posses. Nickel Jim and I know a few of the folks there so it was great to see some folks who we haven't shot with in a while. And since I'm as slow as molasses and have a tendency to screw around and joke a little too much,  I requested that we be put with the posse that let's say weren't as serious as the other.


And thank goodness we did! On the very first stage, I had a round with a primer problem and then after I took one shot with one pistol a piece of my pistol falls off.  It  looked to be the start of one bad day, but I said "screw it" and wasn't going to let it ruin my day.  The result was that the rest of the stages were great!


I shot respectable for me, especially since this was the first match that I shot in a few months because of the weather.  My father-in-law Nickel Jim fared a lot better. He is a pretty competitive sort of guy, so it means a lot for him to do well.  And yes, I'm glad he did that day.

Of course, there is the fact that some of our friends think that we are both about a half a bubble off plumb.

And honestly, among the things that I hope I never forget is what a kick in the pants it was to watch him shoot the buffalo silhouette on the last stage.

I shot just before Nickel Jim, so I was at the unloading table when he got up to shoot.

It was sort of funny listening to people talk about how he "shot the ass of that buffalo."


Cowboy Action Shooting is fun for so many reasons. And yes, it is different for so many of the shooters.  For me, it's two of my favorite past times rolled into one. I get to socialize and shoot.

Over the last 4 years or so, I've found that it's not the competition that draws me to a match. It is the laughing and having fun.  It is the people. They are,  for the most part, a really great group of folks.


It took me forever to join Cowboy Action Shooting. I remember putting it off for one reason or another for a real long time. And now looking back on it, I really shouldn't have waited.


If you're thinking about it, maybe you should think of heading out to a range and checking out the fun!