A Prayer On Trial In Rhode Island

Yes, another Federal Judge, who has taken it upon himself to rule on the meaning of the First Amendment of the Constitution of the United States, has just ruled that a Rhode Island High School must take down a "prayer banner."

The "prayer banner," in reality a sign that has a prayer on it, encourages students to be kind and helpful, to study hard and be respectful. Imagine the horror of that!

And why do they have to take it down, well because it offended an Atheist student - which of course the Federal Judge said was a violation of the U.S. Constitution.  That's right, a single Atheist student! One, that's all it took to have a piece of the school removed.

It isn't a Nazi Swastika, or a picture of a Black Panther with clubs intimidating voters at polling places, or an ad to join Muslim suicide bombers in attacking Americans. It is a simple prayer!

It's not the start of a religious takeover. It's not some sort of Catholic conspiracy starring Tom Hanks where the Catholics have decided to turn all the boys into Priests and the girls into Nuns! No, it's just a simple prayer!

Friends, I'm willing to bet that almost everyone has at one time or another in their lives said a prayer. It's not that hard to do!

Folks, simply put so that even Liberals and Atheist can understand, a prayer is a plea, a petition, a request. A prayer is solemn and sincere. It asks for help, or can be used as an expression of thanks. It can also be a confession of things that weight down a persons soul. Usually a prayer is addressed to God.

Of course God is not always Christ to many of the world's population. And that's the rub, when it comes to liberal Federal Courts demanding that prayer and religion be removed from schools or government buildings, they act as though it's all stopping Christianity's influence. Liberal see Christianity as the enemy of the State.

But friends, fact is that prayer in itself pre-dates Christianity.

Someone should have advised that poor Atheist student that prayer is something that mankind has been doing since the dawn of time. Contrary to what the Liberal Left believes, no, prayer did not start with the Holy Bible or Jesus Christ.

Precaution: A measure taken in advance to prevent something dangerous, unpleasant, or inconvenient from happening.

Boy does that sound like prayer to me! I know for a fact that when I was a student, I pleaded for help before math and biology exams. It was usually in the form of "God help me!" - after I took my first look at the exam questions.

I know that Jews pray, Muslims pray, just as the Sikhism, the Shinto, Jainism, Hinduism, Buddhism, Bahá'í, Taoism, all pray in some way, shape, or form. The ancient Greeks prayed, and friends, even the Norse who practiced Germanic Paganism prayed.

Believe it or not, even Christian Science teaches that prayer is a spiritualization of thought or an understanding of God and of the nature of the underlying spiritual creation.

I remember the day that my brothers and I were at Kaimuki Theater watching a movie. In the middle of the movie, the house lights came on and the theater manager walked in to inform us that former Prime Minister of Great Britain Sir Winston Churchill had died. We bowed our heads in prayer and a moment of silence, then he left and the movie started back up again.

Yes, granted it's usually when our bacon is pulled out of the fire, or when we want something, that we pray. But frankly, I've always believed that that is more times than not the reason most folks pray. Whether they knew it or not, in my book, saying "Thank God" is indeed a prayer.

I believe that Liberal Leftist, the Socialist, the Atheist, that they too pray.  I've seen it for myself.  They talk in a manner that one can only consider a prayer. But in their case, I believe that they're praying for Communism and its anti-Religious doctrine to rise from the dead and take hold around the world.

What angers me is the way they try to nibble away at our religious freedoms! So why doesn't the Liberal Left quit taking small bites at prayer and religion in America?  Why not show themselves to be the devious cowards that they really are? Why don't they try to pass a legistlative bill in Washington to ban all forms of religion in America?

That's what they really want.

It fits the Communist Doctrine. And besides, they've already started by trying to stop Christians from celebrating Christmas. Why not show their real Socialist agenda and go after the Buddhist and Jew, the Sikh and the Muslim? Why not go after all forms of prayer? Why only attack Christians?

A voter approved Sharia Law ban was lifted in Oklahoma by a Federal Judge recently. Why not go after that "real" assault on our form of government and laws?  Why attack a small "prayer banner" that has hung on a school wall for decades?

I'll tell you why they only go after Christians. First, it's because in today's political correct environment, Christians are the easy targets for Liberal Hate mongers in print, the movies, on television, in the political world.

Liberals hate to see a great role model like Denver Broncos' Tim Tebow having a positive effect on people. His Christian faith is inspiring and people are drawn to that sort of resolve. And yes, Liberals hate it!

The second reason that liberals only attack Christians is because they can.  They have the Liberal Judges in their pockets. Yes, it's just that simple.

In fact, the First Amendment says the opposite!

Congress shall make no law respecting an establishment of religion, or prohibiting the free exercise thereof; or abridging the freedom of speech, or of the press; or the right of the people peaceably to assemble, and to petition the Government for a redress of grievances.

It's fairly short and to the point. So after reading it, where exactly in the First Amendment of U.S. Constitution does it say that a school cannot have a prayer banner? No where!

That, my friends, is why Liberals, and Atheist, and the ACLU, and their ilk, all depend on Federal Judges who are also Liberal. These liberal judges make their rulings knowing real well that most of us don't have the power or the money to fight their skewed decisions.

That's why U.S. District Court Judge Ronald Lagueux is able to rule that the prayer banner at Cranston High School West must be removed immediately. It is because "He" believes that that banner promotes religion. And yes, he has the power!

That's right! It's not because the First Amendment says they have to take it down. There is nothing in the First Amendment to violate by it being there. It is simply that "He," judge Ronald Lagueux, doesn't want it there - and he sides with those who want it taken down.

Because an Atheist student by the name of Jessica Ahlquist didn't like it, she decided to get her parents to sue the City of Cranston and Cranston High School West after they initially refused to remove the banner.

One of the problems that I have with this story is that the banner encourages students to be kind, helpful, honest, to do their best, to value friendship - and the Liberal Left has a problem with it!

I really believe that they don't hate the fact that it is a prayer half as much as the great message it gives to students. Yes, the Liberals hate it!

Doesn't it make you wonder why?  I does me. And friends, I believe the reason that they hate morality and religion is that it goes against their basic philosophy of how people should conduct themselves.

Why else would such a creed, a prayer, a wish, such resolve, bother anyone. I really believe that it simply goes against the Liberal way of thinking. 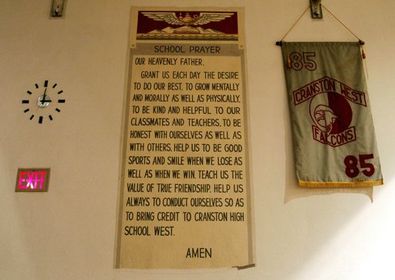 Cranston City officials defended the mural and called it as an Historical Artifact – noting that it served no specific religious purpose. Right now, it is really unclear when or if the school will remove the banner.

David Bradley, the man who authored the prayer when he was a 7th grade student there, told WPRO that he is furious about the Judge's ruling.

"I am upset, disappointed and not to say, outraged," he told WPRO. "It's a shame that some judge with an appointment out of a Cracker Jack box can make a ruling like that." He went on to say that he believed that the Atheist student who filed the lawsuit is just being used as a pawn by the American Civil Liberties Union.

I couldn't have said it better.