District Attorney Gascon said the basis for the child endangerment charge was that the couple's son saw the alleged incident occur. Gascon declined to explain the allegation that Mirkarimi influenced a witness.

"While I do not relish having to bring charges against a San Francisco elected official, I have taken an oath to uphold the laws of the state of California," Gascon said. "Whether this was the elected sheriff or any other San Francisco resident, this type of behavior is inexcusable, criminal and will be prosecuted."

Gascon said prosecutors have also requested an emergency protective order prohibiting Mirkarimi from having contact with his wife and son. He is also ordered to stay away from his home while police investigate other possible domestic violence incidents involving Mirkarimi and Lopez, Gascon said.

A neighbor reported that Mirkarimi grabbed and bruised Eliana Lopez's arm during a heated argument at their home, according to a police affidavit.

The injury was shown on a video recorded by the neighbor, and a text message conversation between Lopez and the neighbor included details of the incident, according to the affidavit requesting a search warrant to obtain the video camera and phone. Lopez is a former Venezuelan Telenovela star.

According to reports, this arrest is typical San Francisco as controversy swirled around the investigation from the start.

Why? Well, just days after the arrest, Mirkarimi was sworn in as San Francisco sheriff, but a judge had declined to perform the ceremony to avoid a potential conflict if Mirkarimi were charged.

Mirkarimi appeared at the ceremony with his wife and son. Asked about the incident, he called it a "private matter, a family matter."

Well it's good to see that the new SF Sheriff knows a little about the law - fact is that all domestic violence cases are considered a family matter. But the days of it being private are long gone!

The case has prompted newspaper commentary and typical San Francisco style protests by anti-Domestic Violence groups. A coalition of them on Thursday urged Mirkarimi to take a leave from his post until the case is resolved.

San Francisco's sheriff does not have broad law enforcement powers as sheriffs do in other jurisdictions. The position mostly entails overseeing an organization of more than 800 sworn officers and a civilian staff of about 100.

Mirkarimi was elected sheriff in November after serving seven years as one of the San Francisco's City Supervisors with a reputation of being an Ultra-Liberal.

If convicted of the domestic violence charges, Sheriff Mirkarimi would have to give up his department-issued firearm and possibly be subjected to searches as conditions of probation.

Luckily for Sheriff Mirkarimi, under California State law, he can only be automatically removed from office if he's convicted of a felony.  But as San Francisco wacky politics run its course, California State laws and even Federal laws have been known to take a backseat to the wishes of the most Liberal City in the nation.

According to the S.F. Ethics Commission, Mayor Ed Lee does have the authority to charge Sheriff Mirkarimi with official misconduct and suspend him from his office.

And yes, the San Francisco Mayor has already taken his first shot. In a statement issued on Friday, Mayor Lee termed the charges "extremely serious and troubling," but did not indicate what actions, if any, he would take.

And as for the other end of San Francisco politics, well the S.F. Ethics Commission could make a recommendation to the Board of Supervisors about whether to permanently remove Sheriff Mirkarimi from office.

So all in all, a man who was once the city's most ultra-liberal was arrested, booked, and charged for domestic violence, and now swears that he is innocent!

Next Shot - High and to the Left!

It's apparent that Che Guevara is alive and well in Hollywood. But at Mercedes as well?

Yes, though Mercedes has issued an apology for using a picture of the Communist Marxist. To me their apology that they did not realize that a picture of Che Guevara to promote luxury cars would offend people really doesn't hold water.

Daimler AG, the German company that manufactures Mercedes-Benz luxury cars, called its promotional use of an image of the Marxist revolutionary Ernesto "Che" Guevara a "thoughtless" and "stupid" decision that was not intended to offend people.

Their apology has done very little to appease Cuban-Americans, including two U.S. lawmakers, who describe Che Guevara as a "sadistic serial killer who murdered thousands of men, women and children." 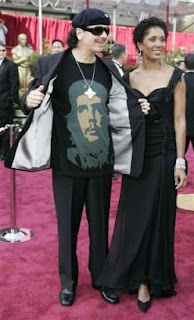 Fact is that many of the Liberal Left in Colleges and Universities, television and in Hollywood, all seem to love to wear t-shirts with his picture on them. It is considered the in thing to wear among Occupy protesters and their supporters.
Its has always amazed me that Carlos Santana would wear a an image of Che Guevara on his shirt that he wore to the Oscars one year.

The image of Che Guevara, the image of the Argentine Marxist revolutionary who helped Fidel Castro gain power by slaughtering thousands many by his own hand, appeared briefly on Tuesday during a promotional presentation for Mercedes-Benz at the International Consumer Electronics Show in Las Vegas.

The murderer Guevara played a critical role in the 1959 overthrow of Cuban dictator Fulgencio Batista who was backed by the United States at the time. It was the culmination of a more than two-year guerilla war in which Che Guevara ordered the beatings, the torture, and the execution of men, women, and even children as young as 10 and 12 years old - all in the name of Communism.

"It's a pathetic apology," Florida Rep. Mario Diaz-Balart, a Republican, said in an interview with Fox News. "He [Che Guevara] was a cold-blooded killing machine" who "talked about using an atomic bomb to kill all Capitalists."

In a statement sent to Fox News, Daimler said it "was not condoning the life or actions of this historical figure or the political philosophy he espoused."

"In his keynote speech at CES, Dr. Zetsche addressed the revolution in automobility enabled by new technologies, in particular those associated with connectivity. To illustrate this point, the company briefly used a photo of revolutionary Che Guevara (it was one of many images and videos in the presentation) …We sincerely apologize to those who took offense," the statement said.

According to the News, when Daimler was further pressed on the matter, Daimler spokesman Han Tjan said the image appeared for "only a few seconds" during the 45-minute "Power Point" presentation.

"It was very thoughtless not to realize that by doing that, it would offend a large number of people," Tjan said.

Diaz-Balart is not the only U.S. lawmaker to denounce the image. Florida Rep. Ileana Ros-Lehtinen said the company "should be ashamed of themselves for using the image of a cold blooded murderer in one of their publicity campaigns."

"Obviously the creators of this ad have the wrong image of Che Guevara," Ros-Lehtinen said in an email to Fox News. "El Che was a corrupt, bloodthirsty coward who killed countless innocent Cubans at the beginning of the Castro regime. Reports from people who knew him recount tales of an especially brutal person who would not think twice about killing a father in front of his son or ignoring the pleas of a mother to not send her son before the firing squad."

"That was the true Che Guevara, the odious gangster unleashed against the Cuban people by the just as odious Castro brothers," she said. "I am glad that they [Daimler] have done the right thing and apologized for it."

"In Latin America, the people who love Che Guevara are usually the same people who hate the United States," Perez said. "But in this county, most of the people wearing his image on their shirts don’t even know who he was. Young people think it's a fashion statement, when in fact it's extremely offensive."

"To us, it's the equivalent to how Jewish Americans would feel if they saw someone wearing the image of Hitler," he said. "He had hundreds of people killed by Castro’s firing squad. And he would force people to watch executions." 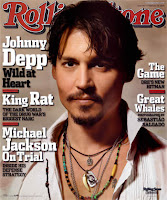 For a moment there, I thought he was talking about Hollywood and the young Liberal Leftist coming out of our Colleges and Universities.
To my way of thinking, I believe that whoever was in charge of the Daimler promotional ad campaign was probably not very smart.  Most likely he or she has a degree in Liberal Arts and is completely uneducated as to who Che Guevara really was.

I really hope that this is the case.

Heck, I hope that the Liberals in Hollywood, like say Johnny Depp who wears a necklace with the image of Che Guevara proudly displayed on it, understands that Guevara was indeed a blood thirsty murderer on a large scale.

I hope everyone on the Left knows who they are idolizing. I really hope they wear Che Guevara t-shirts because it's an "In" thing to do on the Left.  I really hope that that is the case, it would be a real shame to find out that Liberals are so stupid as to actually admire a man who was in reality a Marxist political mass murderer.

Tom Brokaw is compares the GOP Primary to a Jihad.

The GOP primary battle to find our nominee was called a "Jihad" by former newscaster Tom Brokaw.

"You’ve got what appears to be the Republican equivalent of the Jihad underway down in South Carolina with Gov. Perry and Speaker Gingrich going hard after Mitt Romney,” explained the former anchor of NBC's Nightly News, on MSNBC.

It appears that Tom Brokaw is upset because the candidates are fighting over who has the more experience and a better plan to fix what Obama has screwed up and beat him in November.

Of course everyone has there opinion on things, and Brokaw has his - though wrong and demeaning as it is.

It just makes me wonder how the Liberal Media would have felt if a Conservative veteran news anchor, say during the 2008 Democrat primary, had said that Clinton's questioning of Obama's experience and plans were a "Jihad".

I'm pretty sure that the Media outcry would have been loud. And yes, they would have demanded an apology immediately. But, so goes the double-standard that is America today.

Just look at the way things have been for a while now, those who questioned and attacked a Black Conservative like Herman Caine - the Left called Patriots.  But question or disapprove of what Barack Obama is doing, and automatically you are called a Racist and a Bigot - as if his color and political party puts him above being questioned and examined.

In America, no elected official should be above scrutiny because of their color or political affiliation. But as we all know, the double-standard goes on - and it's gotten old.