It was a sorry end to 2011 for a group of about 250 San Francisco juveniles heading to the slopes.
Yup, the Police in Nevada busted 250 of the underage skiers for marijuana possession when the group’s buses stopped for gas during their skiing vacation to Utah. The Police Officers on scene are said to have found marijuana in the luggage of almost all the kids.


But wait, the problem that the law has at times is simply not enough jails!  Why? Well, the officers let them all off only with a warning - because the local jail could accommodate only 20 and they simply didn't have enough room for the rest.
But that's OK, I'm sure some of the Officers enjoyed watching those dopers cry a river of tears as they dumped their stash of illegal grass. Unless of course they could all produce prescription slips for medical weed - which is doubtful.

So what are we supposed to think about an taxpayer funded abortion group that has assets of over One Billion Dollars?


No kidding, Planned Parenthood tops $1 Billion in assets! And friends, 46% of group's income comes from you and I - the Taxpayers.
It was reported that the nation’s largest abortion provider topped $1 Billion in total net assets in 2009-2010, its first time reaching that mark, according to Planned Parenthood’s latest annual report. Imagine that!

So why are American Taxpayers funding them? I blame the Liberal Left which finds it hard to kill a convicted murderer on Death Row, but finds it easy to kill unborn babies.

All 5 of the top GOP Presidential Candidates have signed a pledge to defund Planned Parenthood. Any one of them will get my vote come November!

Talk about Taxpayer's funding things that are not a government service, how about the $4 Million price tag on Obama's vacation? That's right,  $4,000,000.00 for a holiday vacation to Hawaii on us!

Wow, that seems like a lot of money for a vacation. And yes, I once wondered about the cost as well. In fact I wondered so much about it that I asked a friend of mine who was once involved in setting up those sorts of trips.

I was told that people have a habit of forgetting "The Stuff." Yes, every time the president goes somewhere, it's not only Air Force One that goes along for the ride. No, not hardly. "The Stuff" goes with him.

Fact is that along with Air Force One are two Air Force giant transport aircrafts.  Both are tasked with taking along the president's limo, as well as all of the other vehicles in the president's motorcade -  including security vehicles and an ambulance. And don't forget his helicopter, Marine One. It goes along as well.

And although president Obama is one of the wealthiest men to ever be president, with a net worth of about 10.5 Million Dollars, he rents all of the places where he, his family, his staff, his guest who are his usually his biggest donors, his personal physician, and his security detail will be staying.

The good news is that President Obama has supposed ended his $4 Million dollar Taxpayer Paid vacation in Hawaii and is getting back to work.  Of course that means that he's need at a golf course or on the campaign trail where he'll be needed to attend fund-raisers so that he can raise millions of dollars from Liberals who want the federal government to pay for everything.

Some reports have suggested that he has worked while he's been away. Other reports have him swimming and having just one big party. I personally don't know if he's been working or not. But I know this, I sometimes think that our country is safer if he does nothing at all.

I read somewhere that the president is looking for a new campaign slogan for his 2012 reelection run. His problem seems to be that that whole "Hope & Change" thing is still alive in the minds of many Americans everywhere who are now searching for hope and want to change presidents.

The problem for Obama is that now the a lot of folks have a great picture of who he is and what he has down to America.  Now many are saying we need hope and change and it's time to get rid of Obama.

Yes America, many know the answer to the question "What would be a big change for this country?" The answer is clearly, a new president. And as one bumper sticker put it, "Any One But Obama."

Maybe then we will find out if all of the new compelling evidence from multiple experts that the birth certificate released by Barack Obama is a fraud is really true?

But besides the issue with the Birth Certificate fraud, I've read about a few folks at the Gibson Guitar Corporation who would rest a little easier if Obama was out of the White House.

Yes, the same Obama appointed Attorney General who is believed to have authorized the gun running of arms into Mexico, has been busy in all sorts of ways.  Fact is that the Federal Government actually sent armed agents to conduct two raids of the Gibson Guitar factory. Yes, twice since Obama has become president.

So what Gibson Guitars has to do with Homeland Security is beyond me, but armed agents from the Justice and Homeland Security Departments did in fact raid the offices and factories of the legendary Gibson Guitar company in Nashville and Memphis last August for the second time since President Obama took office.

Imagine the scene, agents wearing bulletproof vests rush in, then round up everyone up and take them outside. After that they seized almost 100 guitars and boxes of raw materials. This according to Gibson Chief Executive Officer Henry Juszkiewicz.


Supposedly the raids have cost Gibson Guitar Corp an estimated 2-to-3 Million Dollars in defense and legal costs. Non-refundable of course!
In the previous raid two and a half years ago, again over wood from Madagascar, the company was never charged but they still had to get legal help.

Each time, it's the same thing! The full force of the United States Department of Agriculture is put into action. That's right, the USDA!

The agents in August were investigating possible violations of the Lacey Act.

According to the U.S. Department of Agriculture website: The Lacey Act combats trafficking in “illegal” wildlife, fish, and plants. The 2008 Farm Bill (the Food, Conservation, and Energy Act of 2008), effective May 22, 2008, amended the Lacey Act by expanding its protection to a broader range of plants and plant products. The Lacey Act now, among other things, makes it unlawful, beginning December 15, 2008, to import certain plants and plant products without an import declaration.

But these weren't Inspectors from the US Department of Agriculture, this was big government gone wild using a group of agents from Homeland Security of all things. The Homeland Security agents seized 6,000 fingerboards made of rosewood from India.


But wait, our Fish agents were wrong! In fact, India’s Deputy Director General of Foreign Trade wrote in a letter to the Obama Administration that the fingerboard is "a finished product and not wood in primary form."
And what else? Well, he went on to educate the Obama Administration by advising them that India allows free export of such products.

I honestly think it's a really sad situation where an agency of government can't simply sent someone over to a business and ask a question or two about the products they're using.  Why is it that there are people out there bent on treating everyone like they're criminals?

This gots-ya shit has got to stop!

In my opinion that's how Waco started. Over zealous agents, too willing to use their latest expensively equiped SWAT team to get to do police work.

That sort of action is what the Nazis did in Germany during the 1930's and during World War II.  It is horrible to think that our Federal Government can act like Nazis whenever the desire and the boredom overtakes them.

Homeland Security agents should be attending to the business of protecting "We The People" from Islamic maniacs bent on appeasing Mohammad by killing more innocent people, and Leftist groups intent on our destruction, not trying to find the goods on Guitar makers!

If we have "agents" they don't have anything to do in the way of securing America, then maybe they aren't needed anymore! If they can find the time to go bust guitar makers for what kind of wood they're using, then it's obvious that those guys in Homeland Security most think the real credible threats to this country is just not worth looking into.

So now, with some help from the Indian government, we can only hope that the Obama administration will leave Gibson Guitar Corporation alone to build something in America.


And for the last random shot of the new year, it's about Smith&Wesson firearms.
Smith&Wesson is the largest manufacturer of handguns in the United States. The corporate headquarters is in Springfield, Massachusetts. They were founded in 1852, and today Smith & Wesson makes revolvers, semi-auto pistols, and tactical rifles.

I have owned a few Smith's in my time. I've always liked the way they handle, the feel of the pistol, their reliability. I've always liked their balance, and the look, the basic aesthetics of their line of pistols.  Their guns were always nice and simple, and they didn't look like toys. They looked like firearms, guns, pistols.


Like many others, I wanted to buy another gun lately so I went to a Gun Shop and took a look at what I had already found on the Internet. Their new line of revolvers are ugly.  Please understand that's just my opinion, but Smith & Wesson is putting out some really ugly guns. 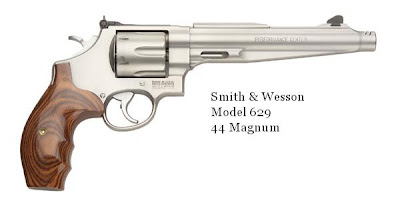 OK, so I like traditional looks. And yes, I know that some of their change is being made "to improve" on their guns.  But seriously friends, I really believe that aesthetics are important.

As I look at their line of handguns these days, and taking into consideration their extremely high prices, I'm probably going to go with another manufacturer like say Ruger or maybe even Charter Arms.
I know that Ruger puts out tough hard working guns. And as for Charter Arms, well like Ruger and Smith&Wesson, I know first hand that they put out a really reliable, well balanced, hard to beat, aesthetically pleasing line of pistols, accept without the insane prices.

I've owned a Charter Arms Bulldog since the early 80's.  It is rugged and lite, and it's great for taking along fishing, or at your side atop a horse in the back country. And these days, I go armed!

Until next time! Happy New Year!