One Billion Dollars Is A Lot Of Money!

It is! One Billion Dollars is a great deal of money. 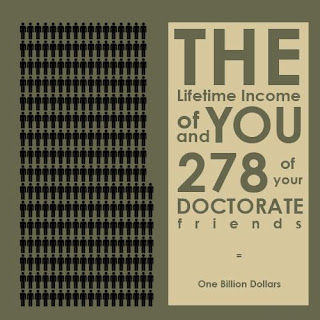 If you have a PH.D., then you already have a leg up on everyone else. Just gather together 278 of your PH.D. type friends and add up all the money that all of you will make during the 40 or so years of your career - and there it is - One Billion Dollars. 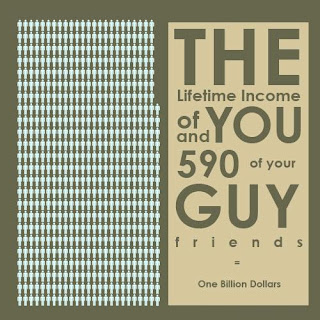 Of course if you don’t have a PH.D and consider yourself just an "average" guy, then you will have to work a little harder, a little longer, or maybe just round up an another 590 of your "average" guy friends and again add up all the money that all of you will make during the 40 or so years of your career - and there it is - One Billion Dollars. 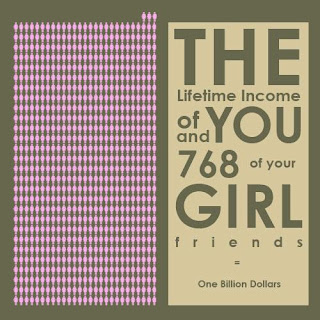 If you’re female you will need another 768 girlfriends to reach One Billion Dollars over the course of your accumulated lifetimes. 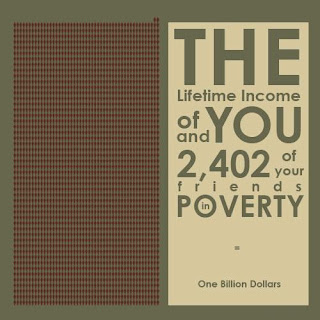 Of course if you are in the unfortunate position of living below the poverty line, then it will take an entire regiment of folks who are also in the same boat to come up with One Billion Dollars in a lifetime. 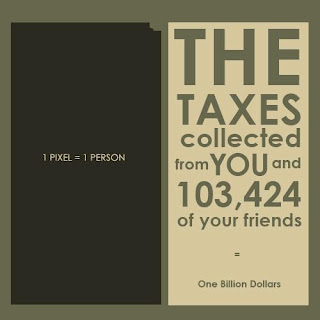 To get a rough idea of how many Taxpayers would have to take their entire life's eanings to make One Billion Dollars.

Imagine the entire life's eanings of 103,424 people. That's all of the Oregon Ducks fans at the Autzen Stadium combined them with the Indiana Hoosiers at Bloomington's Memorial Stadium. That's how many Taxpayers would be needed to make One Billion Dollars. 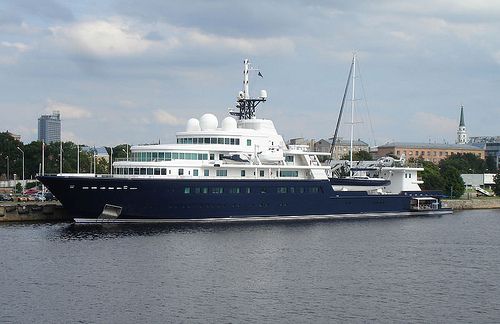 The Le Grand Bleu yacht above costs $90 Million. Some yachts cost as much as $200 million or more.You can buy ten $100 million yachts with One Billion Dollars. 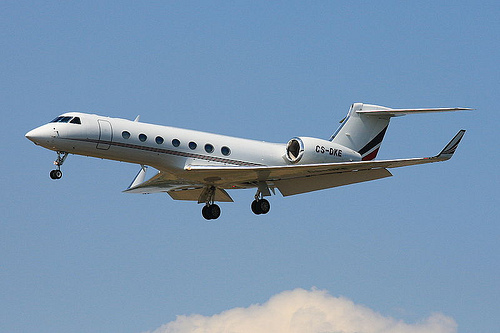 The jet is a Gulfstream G550. You can pick one up for around $40 Million for the base model. For $60 Million, you can buy a top-of-the-line variation. One Billion Dollars will buy you 25 of these. 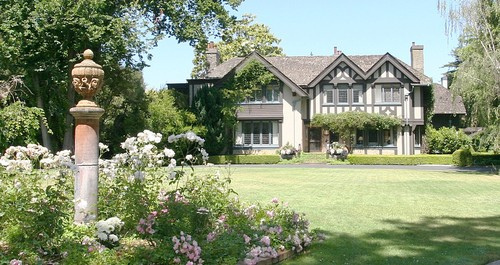 A home such as this would be available for about $8 Million. With One Billion Dollars, you can buy 125 houses like the one pictured - and that is not out of the question in some parts of our country.

In 2011, a Council of Economic Advisers report claims that the Obama $666 Billion Stimulus Package "raised employment relative to what it otherwise would have been by between 2.4 million and 3.6 million jobs."

And to make matters worse, another report says that no one really knows where most of the Billions of Dollars in the Obama Stimulus Package went to. No kidding, no one can explain this!

President Obama's White House employs 454 people with an annual cost of $37,121,463. But these figures, which come from the White House, might be false and lower than accurate. 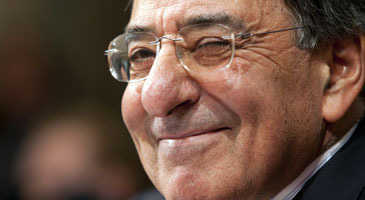 The man in the picture is Secretary of Defense Leon Panetta, and he has cost the American Taxpayers almost One Million Dollars all by himself - actually $860,000 for fiscal year 2012.

That's right, it has been reported that Taxpayers shell out an average of an extra $20,000 a week to allow Defense Secretary Leon Panetta to return to his beautiful California Walnut Farm on the weekends - almost every weekend.

Since becoming Secretary of Defense in July of 2011, Leon Panetta has flown home to spend time at his walnut farm in Monterey, California, 27 times - according to the Pentagon.

Panetta is required by post-9/11 department rules to travel on a military plane with communications equipment, which Defense officials have estimated costs something on the order of $32,000 for each round trip to Monterey and back. The rules require Panetta to compensate the taxpayers for the cost of a commercial plane ticket: about $630.

Of course, $630 wouldn’t get Panetta a private ride on a jet that leaves and returns at times of his choosing, but the Secretary says he "has no choice."

It’s harder to make that argument, though, when you are the one calling for deep cuts in Defense spending and also issue the orders that cause a soldier making $20,000 a year to uproot his family to the other side of the country or separate from them entirely. A Private being shipped to Ft. Bliss doesn’t get to spend his weekends at home, so why should the Secretary of Defense be so special?

Panetta, the cost and nature of whose travels in more than two years as President Obama’s Director of the CIA are classified, faced questions from reporters this last week about the costs related to his desire to fly home every other week to see his family and look after his Walnut Farm.

But today, the questions will come from members of the House Armed Services Committee as Panetta appears for an already scheduled hearing on the state of the civil war in Syria.

This is a very unhappy time for Leon Panetta to be before the House. Not only are his travel expenses rankling deficit hawks, but lawmakers very much want to know about the involvement of elite military members in the prostitution scandal stemming from Obama’s visit to Colombia last week.

The sex scandal questions, though, will be easier for Panetta to answer. He can say that "appropriate steps are being taken" and that "offenders will be punished for any involvement" in the 21-hooker salute that reportedly took place at a resort hotel ahead of Obama’s visit.

Being a career politician is tough work for a jet setting Democrat who crosses the nation at a cost of almost One Billion Dollars to Taxpayers. Explaining why Democrats who are supposed to be the champions of the poor actually allow this sort of bullshit to take place is not going to be easy.

Obama wanted Leon Panetta as Secretary of Defense because of his experience as a budget cutter, especially his work cutting Defense spending as Bill Clinton’s Budget Director. Obama has envisioned the chance to spend on his domestic priorities a peace dividend from the end of the ground wars in Iraq and, eventually, Afghanistan.

The Obamas like spending Taxpayer money. Their New York City "Date Night" cost Taxpayers at a quarter of a Million Dollars.

The First Lady's European vacation to Spain in 2010 had one New York Daily News writer trash Michelle Obama as a "modern day Marie Antoinette" for taking such a glitzy vacation while most of the country is struggling to make ends meet.

Michelle Obama's entourage and 40 of her friends stayed at the luxury Hotel Villa Padierna, a Ritz-Carlton property often described as one of the world's top 10 hotels. Rates range between $500 and $2,500 a night. That trip alone cost American Taxpayers $375,000. 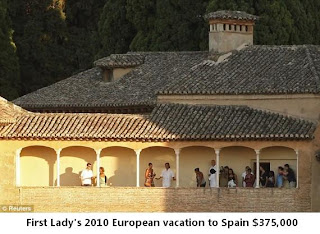 First Lady Michelle Obama’s trip to South Africa and Botswana in June of 2011 cost Taxpayers well over half a Million dollars, possibly in the range of $700,000 or $800,000, according to an analysis by White House Dossier.

Last Christmas, the President that says he wasn't born with a Silver Spoon in his mouth yet went to of the most expensive private schools hawaii while going up - then went to two of the nation's most expensive Universities which no one has said how he paid for that - cost the Taxpayers $4 Million Dollars for his vacation in Hawaii in 2011. ﻿


The Obama administration's GSA scandal has revealed that they spent almost One Million Dollars, actually $823,000 on a "conference" in Las Vegas.

So all in all, it's not that strange for the Obama administration to have a Secretary of Defense that cost the American Taxpayer almost One Million Dollars - just so that he can get to and from Washington D.C. and California to his check his walnuts.

Leon Panetta's proposed cuts and calls for "a much smaller military" have not gone over well with most Republicans and some Democrats in Congress. But hey, the man seems to have no hesitation about using Defense Funding for his own benefit.

All of this adds up over time and Billions are wastefully spent. And yes, contrary to what Obama says - it's a lot of money!

So now, the most important question that someone needs to answer - really shouldn't be directed at Leon Panetta, but instead at President Obama to answer without the use of teleprompters and speech writers.

The question is this:  Can the President of the United States explain why no other qualified person, who could serve as Secretary of Defense and who would relocate to the Washington metro area for the job, be found for the job?

And a second question, if Obama hasn't already shut you out: Why are Leon Panetta's services worth an extra $20,000 a week in average travel costs?


While Barack Hussein Obama may not have to answer those questions, Secretary Panetta can expect to hear these kinds of questions from the Armed Services Committee which members include Rep. Allen West of Florida and Rep. Joe Wilson of South Carolina.

One statement from Panetta tells us a lot about how he feels about spending so much of the Taxpayer's money and not relocating to Washington D.C. permanently.

"I regret that it does — you know, that it does add costs that the taxpayer has to pick up. A taxpayer would have to pick up those costs with any secretary of state or secretary of defense," said Defense Secretary Leon Panetta at an April 16 press conference at the Pentagon while defending his frequent flights to California.

Leon Panetta is 73 years old, and like most of the Democrats who have spent a lifetime in politics - he is extremely wealthy. He should ask himself, can America really afford a Secretary of Defense that cost almost One Million Taxpayer Dollars?

Maybe, just maybe, Secretary Panetta's conscious would steer his thoughts in the direction of accepting the idea that its a much better deal for all of us if he just stays home in Monterey and checks his walnuts on a daily basis - instead of just the weekends?