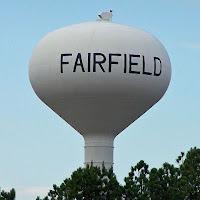 The national trend in fossil fuel exploration in state and private lands may transform the small town into an oil boom town.

Fairfield, Illinois, is the county seat of Wayne County, the site of Frontier Community College, Fairfield Community High School, Fairfield Memorial Hospital, and Airtex - an auto parts manufacturing facility. The population is around 5,154 by the 2010 census.

Well, it appears that's about to change thanks to oil and natural gas exploration in the United States. Yes, state governments and private citizens are tired of waiting for the Obama White House to get off their butts and do something for Americans - so they have taken it upon themselves to go into action.

BMWs, Lincolns and other cars with Louisiana, Texas and Colorado license plates fill so many parking spaces around the Wayne County Courthouse that it's tough for local residents to find spots for their pickups.

Two blocks west, lunchtime business at Jemini Coffee House nearly doubles on some days with new customers who are a little secretive.

And yes, there is a whole new language taking place with fresh phrases creeping into the local vernacular vocabulary such as "lease hound" and "modern-day Clampetts."

Everyone who grew up in the 1960s watched the TV comedy "The Beverly Hillbillies," about a backwoods family that strikes oil. Many now have their fingers crossed!

Wayne County, a rural locale about 270 miles south of Chicago, is experiencing a land rush thanks to a controversial effort to tap into hard-to-reach oil and gas deposits.

A relatively new twist on a 65-year-old technology, horizontal hydraulic fracturing may enable energy companies to hit pay dirt in Southern Illinois. And representatives of those companies, many of them from big oil states like Texas and Louisiana, are descending on Fairfield and Wayne County.

They are digging, but the first diggings are in the County Courthouse looking through land records as to who owns mineral rights where. Once they pinpoint a parcel, they offer leases to farmers and other owners of those mineral rights - and yes, that can mean a lot of money.

According to one industry representative, as much as $100 million has been spent on leasing rights in the region. Wayne County, with a population of about 17,000, is the state's hot spot. At least six companies are there acquiring leases right now.

A regional group of Prosperity-Sucking Environmentalists are scrambling to muster opposition as State Lawmakers rush to stitch together some sort of regulations. Looming over Wayne County and several other Southern Illinois counties is a group of Prosperity-Sucking Environmentalists ready to suck the prospect of finacial prosperty right out of Wayne County.

Ah yes, the Prosperity-Sucking Environmentalists! They are well known in many states around the country.

Is my opinion of them a little too harsh? I don't think so because that's what they do. They can suck the prosperity out of an area faster than anything short of a government program.

Look at what the Prosperity-Sucking Environmentalists hae done to the once great State of California, the Prosperity-Sucking Environmentalists have so many Liberal Politicians in their pocket that they have successfully attacked every aspect of the California manufacturing industry and it's huge agriculture industry to the point that businesses are leaving in droves.

Between the Prosperity-Sucking Environmentalists and the Liberal idea of bleeding business through higher taxes, more businesses are actually leaving California than coming to California - and yes, that's just a fact.

At the heart of what the Environmentalist attack on Fairfield, Illinois, is their dire warning that the sky is falling if energy exploration is continued in the region.

Their extreme position is that they believe that oil exploration in America pits their concept of "an environmental catastrophe" against the promise of energy independence and economic gain for years to come.

Of course, Environmentalists are always trying to say that there is "an environmental catastrophe" for just about everywhere - or maybe that's what they want us to believe?

The Prosperity-Sucking Environmentalists claim that "Fracking," which is the common term for freeing oil and natural gas by pumping water, sand and chemicals into rock deep beneath the surface, has been around for decades - is dangerous and will end mankind as we know it - or something to that effect.

The Prosperity-Sucking Environmentalists believe that it will effect the wells and ground water in the area. What the geniuses don't say is that the high-pressure injections are administered at more than 4,000 feet below ground. 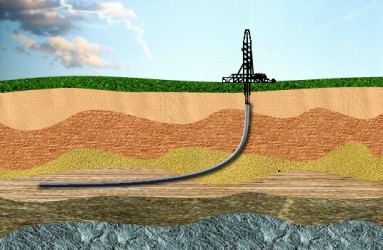 Horizontal oil and gas well drilling has become one of the most valuable technologies ever introduced in the oil industry. It is an Enhanced Oil Recovery (EOR) or gas recovery method that is becoming more and more popular as the price per barrel of oil gets higher.

Unlike a directional well that is drilled to position a reservoir at entry point, a horizontal well is commonly defined as any well in which the lower part of the well bore parallels the oil zone.

The angle of inclination used to drill the well does not have to reach 90° for the well to be considered a horizontal well. Applications for horizontal wells include the exploitation of thin oil-rim reservoirs, avoidance of drawdown-related problems such as water/gas coning, and extension of wells by means of multiple drain holes.

Fracturing the rock allows fossil fuel to be channeled with the sand, water and chemical mix through the well and to the surface from 4,000 feet below the earth is not going to have anything to do with the water tables.

The Prosperity-Sucking Environmentalists have a concern is horizontal drilling. In the last decade, companies have been drilling vertical wells, then turning that drilling horizontally through the shale layer, fracking for oil and gas along the way. At 4,000 feet down, the Prosperity-Sucking Environmentalists don't understand that people can see that their "dooms day" prophecies are just bogus.

The technique has led to speculation that enough fossil fuel can be extracted below the surface of the United States to meet the nation's energy needs for decades. It also has frightened and angered the Prosperity-Sucking Environmentalists because they want no, none, nada, zip, zero, oil exploration in America  - and they are putting out a lot of money to Liberals and the Democrat Party to see that no exploration is the future of America.

The Prosperity-Sucking Environmentalists see this process as "horrible" and "catastrophic."

Concerns in Illinois and elsewhere center on three issues: disclosure of chemicals used in hydraulic fracturing, well-casing standards to limit the risk of contaminants' escape, and the disposal of millions of gallons of leftover toxic water.

But what fails to make the News is the efforts to cleanup the left-over waste and/or return it in place of what was removed. One disposal method injects the liquid several thousand feet underground.

But wait, the Prosperity-Sucking Environmentalists are now using Mother Nature as a means to explain the "hazards" of fracking. With a new U.S. Department of Interior report in hand that stated that the U.S. Geological Survey found an "uptick" in seismic activity where wastewater injection from many industries - including hydraulic fracturing — has increased significantly.

An "uptick"? What are they saying? Well, they are saying that it is not a real increase - but only a rise and fall, a fluke, an "uptick," in those states include Arkansas, Colorado, Ohio, Oklahoma and Texas.

"It's perfectly healthy for people to wonder what's going to happen," said Steve Everley, spokesman for Energy in Depth, a research project supported by the Independent Petroleum Association of America, headquartered in Washington, D.C. "The answers need to be based in fact. (Hydraulic fracturing) is a safe, proven technology."

In addition, the Independent Petroleum Association of America says that states have regulated the technique for more than 60 years "and by any legitimate measure have compiled an impressive record of enforcement in that time."

The U.S. Environmental Protection Agency plans to release preliminary findings of an ongoing report on the subject in January. Anyone think that the report might be a little biased against oil exploration? It's the EPA, of corse they are!

SM Energy Company, which is based in Denver, is one of the companies acquiring leases in Wayne County. Brent Collins, senior director of planning and investor relations, said the company has exploratory energy programs across the U.S., including Southern Illinois, which has a history of producing oil.

So, if the town of Fairfield and Wayne County have problems getting this going and in the process actually do something that benefits all Americans both in as for Energy Independence and the prices at the pump, blame the Prosperity-Sucking Environmentalists who would rather make the Oil Rich Middle East wealthy and us even more dependant on them.

As energy companies snap up mineral leases in Wayne County, some residents are optimistic and very hopefully that their town might be the direction America goes in the future - but they are worried because of the pressure brought to bare by the big money political savvy Environmentalist groups who don't give a rip of about American prosperity.

Many Americans are started to recognize that the Prosperity-Sucking Environmentalists are really today's Public Enemies Number One!