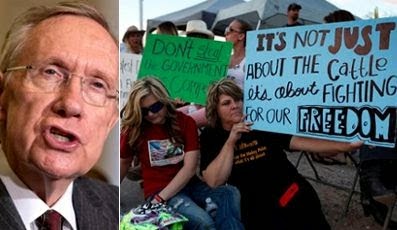 Last week we had the Federal Government show up in force and surround a ranch in Nevada all with armed agents dressed in tactical military gear, snipers and listening devices deployed, armoured vehicles, and all sorts of other logistical/tactical equipment at the ready.

Their mission? The BLM was to round up rancher Cliven Bundy's cattle. Yes, that's what the Feds need for a gathering.

Their reasoning, the "Why" were they there?

2) To make sure that the desert tortoise lives cattle free on its 186,909 acres set aside for it. And no, as incredibly silly as that sounds, I'm not making it up.

Outcome of their mission?

Well, the BLM spent $3.3 Million, yes that's 3.3 MILLION Taxpayer Dollars, to move some cows and collect a debt of $1.1 Million.

Friends, that would be the same as me paying someone $330 to collect $110 someone owes me! Nuts huh?

Yes, this is part of the reason why we are getting screwed by our government -- they are too stupid to realize that that's not how you make money.

Of course, the reason that we are getting screwed by our government is that we have power hungry idiots working for us. Those people see themselves as above acting within the confines of the U.S. Constitution. They see it OK to violate the Bill of Rights.

Are the Feds, the BLM vindictive? Most definitely!

After warning the Bundy Supporters that they will shot -- as those supporters walked toward the military equipped Federal Agents -- the agents decided that there were too many to shot so they left.

Upon their departure, the Fed Agents there left a trail of wreckage and destruction of property and resources -- including water used by the cattle and wildlife in the area.

Fox News toured the damage caused by the Bureau of Land Management -- which included holes in water tanks and destroyed water lines and fences.

No, they were not "Cowboys" -- they were just wannabes on horseback. Real Cowboys would have never shot two prize bulls and been a party of aggression against Americans.

"They had total control of this land for one week, and look at the destruction they did in one week," said Corey Houston, friend of rancher Cliven Bundy and his family.

"So why would you trust somebody like that? And how does that show that they're a better steward?"

The BLM and other law enforcement officials backed down last Saturday in their effort to seize Bundy's cattle, after hundreds of protesters, some armed but most unarmed, arrived to show support for the Bundy family.

The BLM tried to say that they left the scene because of concerns about safety -- and no shots were fired.

Fact is, Americans with hands raised to show they were not a threat walk toward their guns knowing that the Feds will probably shoot to kill.

Watch for yourself what took place on this YouTube Video.


On a conference call, BLM officials told reporters that "illegal structures" on Bundy's ranch -- water tanks, water lines and corrals -- had to be removed to "restore" the land to its natural state and prevent the rancher from restarting his illegal cattle operation.

Some of the tanks and pipes and corrals had been there before the BLM was created but that didn't matter to those who took their frustrations with the situation out on the land and Bundy's property.

And by the way, as with every other rancher and farmer who uses public land, the ranchers and the farmers are the ones who put in the wells, dig the canals, seed, and do other improvements to make arid lands hospitable to livestock -- improvement that benefit the wildlife.

The court order which the BLM used to justify the operation and the destruction appears only to give the agency the authority to "seize and impound" Bundy's cattle.

"Nowhere in the court order that I saw does it say that they can destroy infrastructure, destroy corrals, tanks ... desert environment, shoot cattle," Houston said.

Bundy's friends say the BLM wranglers told them the bulls were shot because they were dangerous and could gore their horses. One bull was shot five times.

That, my friends, is murdering an animal out of anger and vindictiveness! And no, there were no signs of those two bulls being a threat to anyone!

Houston said the pen holding the bull wasn't even bent showing not a sign of any sort of struggle or turmoil on the part of the bulls.

"It's not like the bull was smashing this pen and trying tackle people or anything," he said. "The pen is sitting here. It hasn't moved. No damage whatsoever. Where was the danger with that bull?"

Since the removal of the cattle from this area was supposed to be because of a concern for desert tortoise, why is it that BLM vehicles appear to have crushed a tortoise burrow near the damaged water tank.

"How's that conservation?" he asked.


Rancher Cliven Bundy has refused to pay the grazing fees or remove his cattle, and doesn't even acknowledge the federal government's authority to assess or collect damages.

His reasoning? It's state of Nevada land.

The bureau has said if Bundy wasn't willing to pay, then they would sell his cattle.

There was a problem with their plan -- only a few in all of Nevada would touch Bundy's cattle for fear of being blacklisted.

"The sale yards are very nervous about taking what in the past has been basically stolen cattle from the federal government," Nevada Agriculture Commissioner Ramona Morrison said.

Documents show the BLM paid a Utah cattle wrangler $966,000 to collect Bundy's cattle and a Utah auctioneer to sell them.

That's right, a wannabe wrangler from Utah got paid close to $1 Million!

"As Governor of Utah, I urgently request that a herd of cattle seized by the Bureau of Land Management from Mr. Cliven Bundy of Bunkerville, Nevada, not be sent to Utah. There are serious concerns about human safety and animal health and well-being, if these animals are shipped to and sold in Utah."

That letter was sent three days before the BLM round-up, which is why the cattle were still being held Saturday in temporary pens just a few miles from Bundy's ranch.

Nevada Commissioner Morrison says BLM was sitting on cattle because it had no way to get rid of them -- setting up a potential tragedy as orphaned calves were not getting any milk and feed costs were about to skyrocket.

Now the showdown is far from over and the BLM says it will "continue to work to resolve the matter administratively and judicially," though Bundy still doesn't recognize federal authority over the lands that he continues to use in violation of a court order.

The federal judge who issued that decision says Bundy's claims "are without merit."

That order from October 2013 says Bundy owes $200 per day per head for every day he fails to move his cattle.

Wow, those tortoise must really need that land!

Harry Reid Should Shut Up!

Now, to add his two cents to the problems at hand, yesterday Senate Majority Leader Harry Reid said the supporters who rallied around Nevada rancher Cliven Bundy in his fight against the Federal Government are "Domestic Terrorists" and Bundy does not respect his country.

The Las Vegas Journal-Review reported that Harry Reid, Democrat Senator from the Nevada no less, made the comments at an event Thursday hosted by the paper called “Hashtags & Headlines.”

Of course, those aren't the folks who Harry Reid wants to hear from.

He was all for those disgusting Walls Street demonstrators who caused millions of dollars of damage and injured many during their liberal rampage to aid the Democrat Party, but like the Tea Party groups around the nation -- Harry Reid sees anyone on the right as being "Domestic Terrorists".

Hundreds of states' rights protesters, including some armed militia members, showed up to protest federal officials seizing his cattle.

Some protesters were armed, but ultimately, no shots were fired and the Bureau of Land Management reported that officials left when the supporters refused to confront their superior firepower.

Reid had harsh words for these supporters, saying the government cannot stop pursuing the issue.

Reid said he has been told a federal task force is being set up to deal with the Bundy situation, adding Bundy does not respect the U.S. or its laws.

Reid also suggested the supporters were dangerous to the community.

He said, "They had sniper rifles in the freeway. They had weapons, automatic weapons. They had children lined up. They wanted to make sure they got hurt first … What if others tried the same thing?"

Bundy has been at odds for years with the feds over land management issues which the feds took him to court over.

Now the BLM says he owes more than $1.1 million in unpaid grazing fees.

The grazing fees is only a ploy, fact is that the BLM revoked Bundy's grazing rights long ago on that land after citing concern for a Federally protected desert tortoise which they say cannot co-exist with cattle and needs 186,909 acres of land.

No kidding! The Federal Government, the BLM, says desert tortoises cannot co-exist with cattle -- and they need an area about 100 times the size of Manhattan Island where 1.7 million people live.

Image that for a moment, the BLM has set aside an area that is almost the equivalent of the entire city of New York with all of its 5 boroughs just for the desert tortoise which is found throughout the western United States.

The area that New York City occupies is populated by 8,405,837 people.

That's how much area is being set aside for the desert tortoise, and that's the primary reason Cliven Bundy and other ranchers are being driven off that land.

The desert tortoises are species of tortoise native to California, Nevada, Arizona, and Utah in the United States, as well as to northern Mexico.

Cliven Bundy claims ancestral rights to the land that his family settled in the 19th century and has refused to pay the fees or remove his animals.

Since I support Cliven Bundy in his fight for common sense over the wishes of self-centered environmentalist and Federal bureaucrats who want to set aside an area as big as America's largest city specifically for the desert tortoises, then according to Harry Reid, this old former Marine and Cowboy must be one of Reid's "Domestic Terrorist" as well.

And since I am not a "Domestic Terrorist," but instead am an American citizen with rights which Harry Reid sees as a threat to our government, Mr Harry Reid owes me and all others who support Cliven Bundy an apology.

And the BLM, if they're smart, they'd rethink their policy on not allowing cattle to co-exist with the desert tortoise and all of the other critters in the wild.