Of course, it has been called "cockfighting" since 1495, and has been going strong since before the birth of Christ -- but that doesn't seem to matter to some Louisiana politician trying to skirt the law wants to re-label it to make it more acceptable.

I hate when politicians do that.

His doing that is no different than Liberals calling themselves "Progressives" as if they were the same as the Progressives of Theodore Roosevelt's day when they are not the same.

But folks, that's what's taking place as a Louisiana lawmaker claims "chicken boxing" is a sport.


A cockfight is a cockfight. And yes, it is a blood sport between two roosters (cocks), or more accurately gamecocks, held in a ring called a cockpit.

The combatants are specially bred birds, conditioned for increased stamina and strength.

Cocks are given the best of care until near the age of two years old. They are conditioned to be aggressive and kill.

Wagers are often made on the outcome of the match. And yes, just for the record, when I was a teenager growing up in Hawaii, I attended a few cockfights with people who were there to bet on the outcome.

I remember real well, just as if it were yesterday, how some guy would show up with a real fighter -- only to watch it get rips apart.

Cockfighting is a blood sport due to the physical trauma the cocks inflict on each other. While not all fights are to the death, the cocks may get pretty rips up.

The birds are equipped with either razor-sharp metal spurs called gaffs or knives, tied to the leg in the area where the bird's natural spur has been partially removed.

A cockspur is a bracelet, often made of leather with a curved, sharp spike which is attached to the leg of the bird. The spikes typically range in length from "short spurs" of just over an inch to "long spurs" almost two and a half inches long. 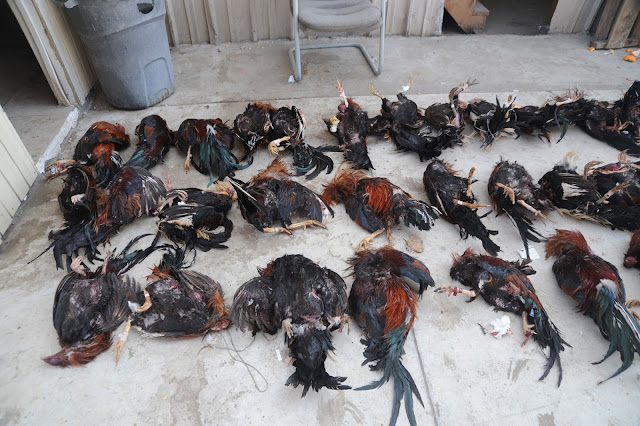 Dead birds found after a police raid of just one cockfight.

Above is a dead rooster with the razor-sharp knife still tied to its leg.

Cockfighting is said to be the world's oldest spectator sport. It goes back 6,000 years in Persia.

"The sport was popular in ancient times in India, China, Persia, and other Eastern countries and was introduced into Ancient Greece in the time of Themistocles (c. 524–460 BC).

For a long time the Romans affected to despise this 'Greek diversion', but they ended up adopting it so enthusiastically that the agricultural writer Columella (1st century AD) complained that its devotees often spent their whole patrimony in betting at the side of the pit."

In many countries, the spectacle of cockfighting is as popular as baseball and football here in the United States.

Though cockfighting may be a "cultural tradition" to many foreign peoples living in America, I don't see it as being acceptable in our American culture. We simply don't need it as a form of sport or entertainment when there are so many other options available for people with a blood lust.

Take for example Mix Martial Arts (MMA), so-called "Ultimate Fighting," where there are almost no rules and two idiots with not a brain cell between them bloody each other -- then pat each other on the ass in gratitute.

Wagering on MMA fights is big money, and the biggest losers like the roosters are the fighters.

The last state to implement a state law banning cockfighting was Louisiana. The Louisiana State Legislature voted to approve a Louisiana ban in June 2007, and the ban took effect in August 2008.

But now a Louisiana lawmaker insists there is a humane version of cock-fighting called "chicken boxing."

That's right. When you want to make the unacceptable acceptable -- change it's name!

Believe it or not, when Louisiana state lawmakers sought to sharpen the language in the state's 2008 ban on cockfighting, an unexpected debate arose over "poultry pugilism," with Sen. Elbert Guillory holding court for befuddled colleagues.

Yes a Republican, just proof that not all of the fools are in the Democrat Party.

He said that it is a sport where the combatants wear "boxing gloves" instead of blades used in cockfights that end in the death of the birds.

Guillory wanted to make sure that laws aimed at ending cockfighting did not also ban what he considers a more humane version.

"Leather spur covers and plastic spur covers, um, that are used in the legitimate sport of chicken boxing might be considered paraphernalia," Guillory reported to the chamber.

Morrell's bill, if enacted into law, would also make it a felony to possess paraphernalia, such as razors, spurs and leather spur covers, which are commonly associated with cock-fighting.

"I appreciate your passion for your constituents, (but) I have no knowledge whatsoever on chicken boxing, so I cannot speak to that," Morrell reportedly continued.

"If chicken boxing ... I can’t even speak on chicken boxing. Honestly, I have never heard of that. It sounds like something to circumvent cock-fighting."

Guillory then explained the distinction between cock-fighting and chicken boxing, claiming the latter was not a blood sport and should not be illegal.

One of Guillory's fellow legislators, Republican Sen. Robert Adley, was quick to express his confusion over the sport.

"I would be very interested to find out how some chicken stands on two legs while it boxes," Adley said, according to the newspaper.

"I understand how humans do it, but I’m trying to figure out how it happens with a chicken. That would be interesting to determine."

OK, now, you have to admit that that is funny.  And yes, Guillory obviously sounds like someone who qualifies to be a Democrat.

After all, it appears he is one of those politicians who will look you right in the eye and tell you it's raining while the sun shines and he pisses on your leg.

You remember the scene in the movie The Best Little Whorehouse In Texas when the story's "Senator Wingwoah" gets caught in a compromising position by the press when they showed up at Miss Mona's.

Afterwards, he says he must have been drugged and abducted because he doesn't have any recalection as to how he got to the whorsehouse -- well now there's a Republican canditate in Kentucky who is almost saying the same thing.

Kentucky Republican Senate candidate Matt Bevin has ruffled feathers after he gave a speech at a Pro-Cockfighting Rally last weekend.

After it was found out, his campaign decided to describe the event as a “State’s Rights Rally.”

Honestly, this has nothing to do with "State's Rights." It was a Pro-Cockfighting Rally!

Bevin’s appearance at the rally was first reported by local newspaper The News-Journal. Cockfighting, which is illegal nationwide, is the bloody practice in which roosters outfitted with spurs fight to the death while spectators wager on the outcome.

According to the event’s organizer, the American Gamefowl Defense Network, the event was held to push for legalizing Cockfighting at the state level.

“(The event was held) for the purpose of unifying and uniting gamefowl enthusiasts around the principle of using the democratic process to change the law, not break the law,” director David Devereaux said in a statement posted on the group’s Facebook page.

Bevin, a businessman from Louisville, is running in the Republican primary against Senate Minority Leader Mitch McConnell.

He bills himself as a candidate who will “stand up for our conservative Kentucky values,” and has heavily criticized McConnell’s record in the Senate.

Bevin’s campaign did not respond to requests for comment from FoxNews.com, but, believe it or not, the candidate told the News Journal that he did not realize the event had anything to do with cockfighting.

“I was the first person to speak and then I left,” Bevin told the paper.

“They knew I was here. They asked if I would be interested in speaking. I’m a politician running statewide, any chance I get to speak to a few hundred people I’m going to take it.”

A spokeswoman for the McConnell campaign said Bevin’s explanation of the event raises eyebrows.

“Only Matt Bevin would go to a cockfighting rally and claim he didn’t know what they were doing there,” Allison Moore said, adding that “at this point nothing surprises us with this guy."

Bevin’s appearance is also drawing condemnation from a lot of folks on both sides.

Michael Markarian, the president of the Humane Society legislative fund, told FoxNews.com that animal fighting is a “terrible crime,” and slammed Bevin’s decision to speak at the rally as “appalling.”

“It shows terrible judgment for a politician to associate with an organized criminal network of cockfighters,” Markarian said.

The federal bill that sets farm policy also prohibits knowingly attending an animal fighting venture, such as a cockfight. It's a misdemeanor in Kentucky to enter a bird in a cockfight.

The issue surfaces in Kentucky during occasional police raids on cockfighting rings, and McConnell drew ire from the cockfighting community when he voted in favor of the farm bill.

Bevin and McConnell will face off in the Republican primary on May 20.

Republicans and Tea Party folks in Kentucky might be asking themselves if this guy has enough smarts to represent them or their interest in the Senate.

Honestly, if this guy is that dumb, he may be just what the Democrats need in the Senate to pass more bills like ObamaCare.

He might vote "Yea" on a Bill like ObamaCare, then later say he didn't know what he voted in favor of.