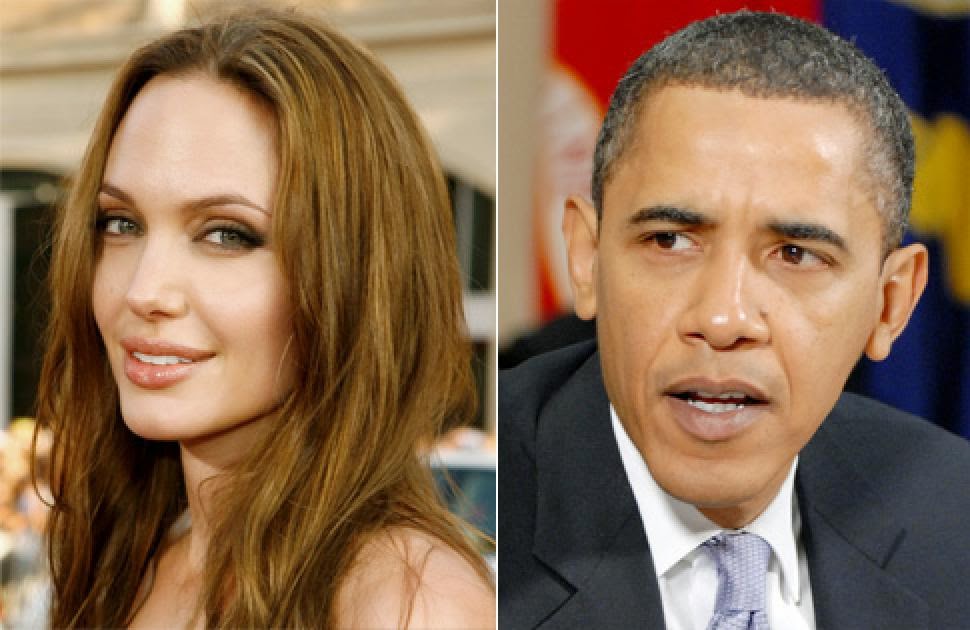 A-List actress Angelina Jolie is reportedly not a fan of President Barack Obama, which puts her at odds with most of liberal Hollywood -- including her husband Brad Pitt who is a big Obama supporter.

It's true, the famous Hollywood actress Angelina Jolie is not a fan of Barack Obama -- and yes, that's putting it mildly.

The news story is somewhat of a surprise considering that Ms. Jolie is often seen as being on the Liberal side of the political equation.

Although that perception my be mistaken as well since she is a strong 2nd Amendment supporter and gun enthusiast.

She may have more in common with he conservative father, actor Jon Voight, than people think. He has been extremely critical of Obama and Liberal politics as a whole.

Commenting about Jolie’s opinion of the 44th president, an unnamed source cited by US Weekly flatly claims that “she hates him.”

"She hates him," a source close to the actress said in the latest issue of US Weekly magazine.

Ms Jolie and her husband, actor Brad Pitt, apparently don’t agree on their viewpoints of the president who promised "hope and change," who has become as unpopular as his heavily criticized predecessor, George W. Bush.

“They get in nasty arguments all the time about it,” the source said about the couple’s relationship. “She doesn’t respect Brad when it comes to politics, but, in the end, this won’t tear them apart.”

The couple will star together in a new film called By the Sea, which will be directed by Jolie.

This will be first joint venture by the Hollywood power couple since 2005′s Mr. and Mrs. Smith.

For others in Hollywood, this could be a Career-Killer!

In general, Ms. Jolie has not made public statements about her political views.

In Hollywood, taking a view contrary to Liberal Hollywood can be a career-killer for others who are far less established in the industry -- or hold to a Conservative or Libertarian philosophy.

Angelina Jolie has been a United Nations Goodwill Ambassador since 2001.

Many of Hollywood’s movers and shakers give millions of dollars to the Democrats, and Obama and other politicians regularly travel to southern California for big-ticket fundraisers.

While the Liberal-left is fairly quiet, Obama has taken a lot of heat from Conservatives for pursuing his business-as-usual Campaign style of governing.

Obama has made it clear that he is more concerned about fundraising with wealthy Celebrities and Liberal billionaires than dealing with international crises such as the shoot-down of the Malaysian airliner over the Ukraine, ISIS and the fall of Iraq, the Israeli ground war in Gaza, or domestic problems such as a U.S. economy the has actually shrank for the first time in 58 years, over-regulation which is stifling the job creation, and of course the Illegal Alien crisis on our Southern border.

Obama has also declined invitations by Texas Governor Rick Perry to actually visit the Rio Grande Valley border area for himself to get a first-hand look at the Illegal Alien crisis.

Instead of visiting the crisis area, he was only visiting Texas for fundraising events.

It is very apparent that Obama is more interested in spending time in the dining room rather than the situation room taking care of problems and doing what a President is supposed to be doing.

While the border crisis is left to Texas State Governor Rick Perry to deal with, the president spends his time attending fundraisers and golfing.

The president has attended 339 fundraising events, and has also played 176 rounds of golf since he took office.

If this is what the Democrats consider good governing, protecting and defending America, they are very screwed up.