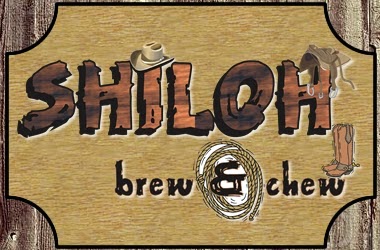 Ashley Izbicki of WBIR, reported on July 18, 2014, that a "Guns are Welcome" sign has gone up at the Shiloh Brew & Chew Family Restaurant in Maryville, Tennessee.

In her report, she wrote:

Gun control is a hot topic across the country, and one East Tennessee restaurant owner is making her opinion very clear by posting a 'Guns are Welcome' sign on the front door of her family-friendly establishment.

"As the owner, I wanted to stand my ground. I have that Constitutional right. If you like it, that's great, if you don't, I'm sorry for you. I can't change who I am," said Sharma Floyd, with Shiloh Brew & Chew.

Floyd said she posted the signs about a month ago after reading a story out of North Carolina.

"They had put up a sign that said 'No Weapons Allowed' and they were robbed at gunpoint two days later. The convenience store manager was shot," said Ms. Floyd.

"And that got me thinking. I lost a whole group of motorcyclists because they thought I didn't allow weapons. But I believe it's OK to carry as long as you have a permit."

The restaurant does not sell liquor, and Floyd said she asks anyone who orders a beer if they are carrying.

Ms. Floyd said Shiloh Brew & Chew is often confused as a bar or tobacco store instead of a Southern style restaurant.

"Brew is for coffee, chew is for food. So in my mind, my concept all went together. But after I made a $3,000 sign and paid for it, I realized that was not a good marketing idea," laughed Ms. Floyd.

"But the 'Guns are Welcome' signs have helped boost business."

She said while one man said he would not come back to her establishment, more than 20 new customers have come through her doors since she posted the signs on three doors.

"I can honestly say I've gotten way more support than the one person who really gave me a lot of grief over it," said Ms. Floyd.

Friday, all of the customers in Shiloh Brew & Chew, many who are considered regulars, voiced support.

"Everyone needs to take a stand for what they believe Is right.," said Ralph Tucker. "Somebody saying guns are welcome instead of somebody crying about how many people are killed with guns. And it's not guns that kill people, it's people that kill people."

At a nearby table, a group from Cleveland, Ohio, had their take on the signs.

The owner said while she does not carry a gun, her customers have a constitutional right to bear arms.

Ms. Floyd said she does not own a gun or have a carry permit, but said her customers have a constitutional right to bear arms.

"I have had so many customers take pictures of the sign, ask to meet me in person, and thank me," said Ms. Floyd.

"There have been as many as eight people in here at one time who I know for a fact had guns. And no one would have known it except I know them personally. They're law abiding, god fearing, Christian people. And that's what I stand on. That's what my restaurant is based on. "

As for how I see it, I love it when everday Americans stand up for their Constitutional rights!   And yes, like the other businesses that I profiled in Businesses Encouraging Customers And Employees To Carry Guns, the Shiloh Brew & Chew sounds like the sort of place that I would love to visit if in Tennessee.   I contacted a friend in that area to ask about the restaurant, and he said he's heard only good things.
After finding out that they too are Christians and Patriots who are showing their support for our Constitution, he said he will stop in as soon as he can.   He'd heard the steak house has great food, great service, and comfortable country environment.   "Home Of The Big ol' Steak"

I know if it were closer, I'd be there when I'm feeling in the mood for a great cut of meat -- which is pretty often.

And yes, anyone who knows me knows that I love a big Cowboy Ribeye marbled, juicy, and full of taste.

They also have a "Big ol' Steak Challenge" which includes a minimum of an 80 ounce cut to order ribeye. Yes, 5 lbs!

If you can finish it, you will be immortalized on their Wall of Fame and receive a commemorative t-shirt to testify to your accomplishment -- aka for braggin' rights.

All this, and the folks at Shiloh Brew & Chew support our Constitutional rights to keep and bear arms by wearing your gun there like a responsible American -- instead of having to leave it in your car before going inside as if you were some sort of threat to others.

So for a great steak and old school Southern/Western cooking, head over to Shiloh Brew & Chew in the foothills of the Great Smoky Mountains in Maryville Tennessee.
If I were there, I would drop in -- even if it's just to say thanks for supporting and defending our Constitution.