It took place on May 22nd, 2014, in North Carolina. A restaurant called The Pit posted a sign out front saying it was a gun-free zone was robbed at gunpoint that week. Three men wielding handguns entered The Pit, a barbecue restaurant, through the kitchen. And yes, two employees were beaten during the robbery.

Yes it is an invitation to be robbed, but there stands the Liberal Mind-Set. The Liberal mind-set dictates that we should bow to Political Correctness instead of standing our ground. But that's OK, because while places like The Pit advertise themselves as being anti-Second Amendment, unarmed and defenseless, and get robbed and their employees get beaten while working there -- there are other restaurants and even banks that are encouraging their customers as well as their employees to carry guns when on their premises.

South Porte Bank isn’t just stopping at the signage, though. In fact, the bank management is actively encouraging its employees to consider arming themselves while on the job, and will even pay for their concealed carry license if they so choose to seek one. Because the State of Illinois was recently forced by a Federal Court to stop infringing on 2nd Amendment rights of its residents, the state must now allow concealed carry of firearms.

Of course contrary to those who oppose the right to self defense with a firearm, gun crime has not increased as a result of that ruling. Instead, it is a fact that there is now evidence to suggest concealed carry is acting as a deterrent for crime. They wouldn't believe us and many died because of their desire to strip Americans of the Constitutional Rights!

While this might seem all pretty new, in Texas, banker Edward Smith has had a policy of allowing guns on his premises since late 2010. After his Chappell Hill Bank was robbed for the 5th time, Smith replaced the large "no firearms" warning at the bank's lone branch with a sign encouraging customers to carry licensed concealed weapons inside. 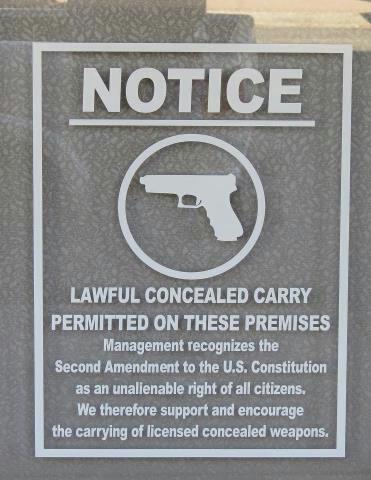 The bank also pays employees to take a concealed firearms course.
"If you're going to need help, you better help yourself because the government is not going to help when you need them," says Smith, the 104-year-old bank's chief executive and a member of the National Rifle Association.

But on the other hand, deposits poured in to the $24 million-asset bank from sympathizers in 12 states and three countries. No robber has dared threaten the bank since its policy change. Guns are the reason that robbers stay away from Chappell Hill Bank and instead hitting the other banks in the area.
Smith has taken some "grief" for the gun policy and for closing the bank in January for Confederate Heroes Day. But frankly, he doesn't apologize for his Conservative ways. It's no wonder he closed to observe Confederate Heroes Day, to many States Rights is important issue.
It appears he's not one to hand over State's Rights to the Federal Government for a Centralized Government such as what takes place in Communist nations. Republican presidential candidate "Ron Paul is an acquaintance of mine and he considers me one of the few people to the right of him," Smith says.

Smith says he has defended the firearm policy in discussions with regulators. But than again, that's nothing new. A government examiner, someone there to enforce Socialist Political Correctness, once suggested he remove paintings of Robert E. Lee and Stonewall Jackson from the bank's lobby.

Mr. Smith has my whole hearted respect for standing firm and telling that examiner where to go! And just for the record, the Chappell Hill Bank located just north of Houston may be the oldest continuously operated bank in America. It was established on 1907 and didn't even close on President Franklin D. Roosevelt's bank holiday in 1933.

"We encourage it, and the customers love that they can come here and express their rights," Lauren Boebert told a reporter recently. "This country was founded on our freedom. People can come in carrying their gun, and they can pray over their food."

Even the staff is armed, with waitresses taking orders while carrying handguns in holsters strapped to their legs. A sign on the front door reads, "Guns are welcome on premises. Please keep all weapons holstered, unless the need arises. In such cases, judicious marksmanship is appreciated."

And if you don’t have a gun permit? No problem! The 55-seat restaurant also offers regular classes to qualify for a concealed carry permits for Colorado and Utah. The $75 price tag includes dinner. That, my friends, is a great deal!

Shooters Grill offers American and Mexican fare but does not serve alcohol. The decor is that of the Old West with guns and cowboy art on the walls. And according to all of the reports, customers all seem to love it.

"No one has ever turned around and walked out because they saw a gun," Boebert said. "They might have left because it was too crowded, praise the Lord. But not over the guns."
Wayne and Martha Greenwald are from a small town in Michigan. They fully support allowing people to carry guns in the restaurant. "We think it’s just fine, we’re very positive about it," Wayne Greenwald said. "We carry guns ourselves and own a rifle, shotgun and handguns. We live in a very small town and we take care of our own crime problems. No one comes to Grand Marais to break into someone’s house." The salt and pepper shakers are made from shotgun shells. Lauren Boebert began carrying a pistol shortly after opening the restaurant a year ago. "I started open-carrying maybe a month after we opened just because I am a woman in business and I was there early hours and late nights," Lauren Boebert said. "There was a man beaten to death in the alley behind my restaurant last year. It was very unfortunate."

Her sensibility caught on with the staff, and Boebert makes staffers who want to pack take an extra safety course first. Chef Matt Archambault said word of the gun-toting wait staff has brought in new customers in recent months, but it is the half-pound burgers that keep people coming back.

Yes, there are places where patriotic owners aren't giving way to Political Correctness and actually support and defend the Constitution of the United States. They believe, as most Americans believe, that no one should decide what Rights should be denied to you. Neither the government nor businesses should have the authority to take our Rights from us. Because of that, I believe in supporting those in government who support my rights just as I support businesses who support my rights.

As I've said before, "I support those who support my Rights and the Constitution." I know that some might say that I harp on abiding by the Constitution way too much. But friends, in today's world, we have a government that is openly and unashamed of their contempt for our "Rights" as "protected" in the Constitution. So yes, I see giving our business to those who are standing up for our rights as just a way of saying "thanks!"
It is something that Patriotic Americans who are in favor of protecting and defending our Rights need to do. Supporting CD's Smoke Pit, Shooters Grill, South Porte Bank, and Chappell Hill Bank is only the right thing to do -- because they have shown themselves to be on our side! And frankly, from a security standpoint, any business like The Pit in North Carolina that advertises itself as being totally defenseless deserves what it gets.

Those signs that read "No Guns Allowed," are just invitations to get robbed. Those who put them up are pretty dumb as well as heartless because by inviting armed robbers, they are also putting their customers at risk.