Wild Horses of Galicia Spain, & The Shearing Of The Beasts Festival

As most of you who are regular followers of my blog already know, every now and than I'll post something that you've sent to me.

This is just one of those times. I have a couple of steady readers from Portugal and Spain who are educating me on the horses that really became America's Wild Horses.

One reader sent me this, I hope you are as amazed as I am by this.

In pictures: Rounding-up of wild horses in Galicia, Spain

Every year, crowds flock to the Spanish village of Sabucedo in Galicia, for a tradition that dates back to ancient times - cutting the manes and tails of the wild horses that live in the mountains of Galicia in north-west Spain.

The origins of the ritual are unclear but according to legend, the rite dates back to the 16th Century when the people of the village were spared the plague by their patron Saint Lorenzo and in return sent horses into the wild.

But the undoubted drama of the "Rapa des Bestas" is to animal rights activists a show of unnecessary brutality. 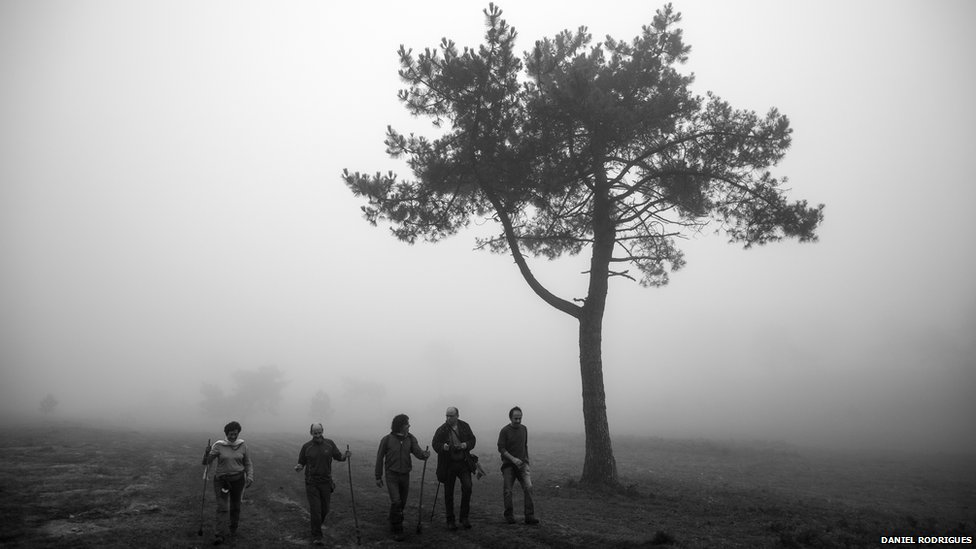 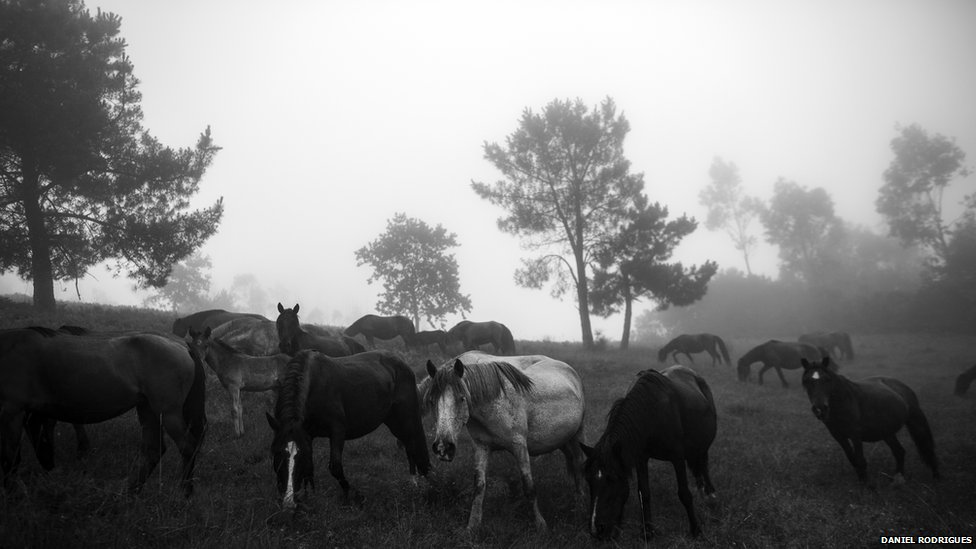 Prayers are said and they head for the hills in search of the "beasts". Fog hampers the search as they cover long distances across breathtaking landscape looking for the horses.

A severe winter with torrential rain and freezing temperatures has hit the wild horses of Galicia hard. 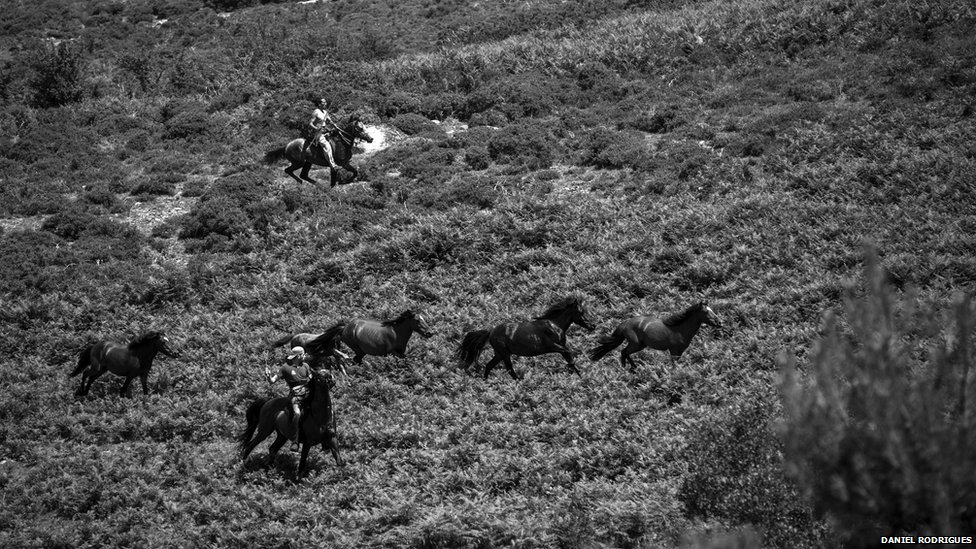 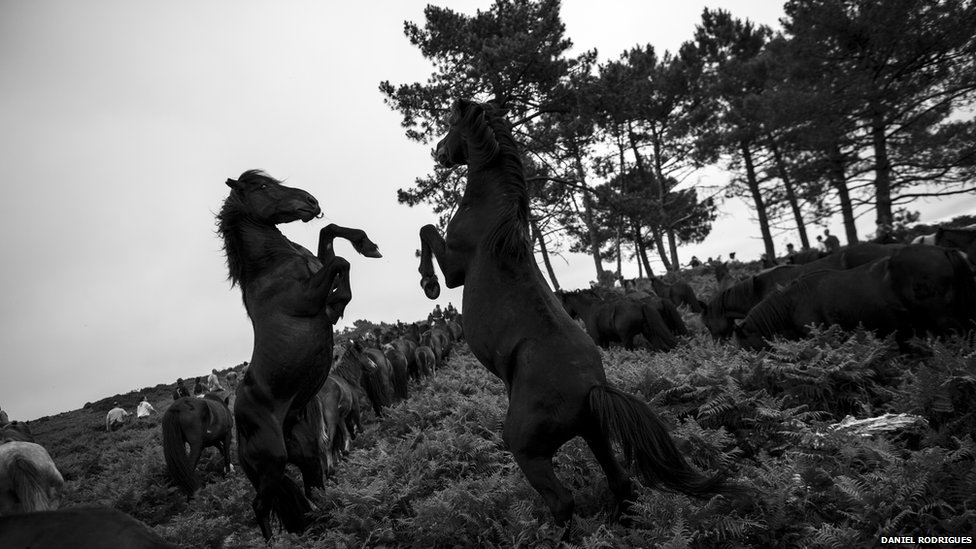 Riders join the hunt to corral the horses together and bring them down from the hills.

The wild horses are known in Galicia as "brutes" and, as the round-up gathers pace, some of the horses struggle with each other. The clashes can sometimes turn violent. 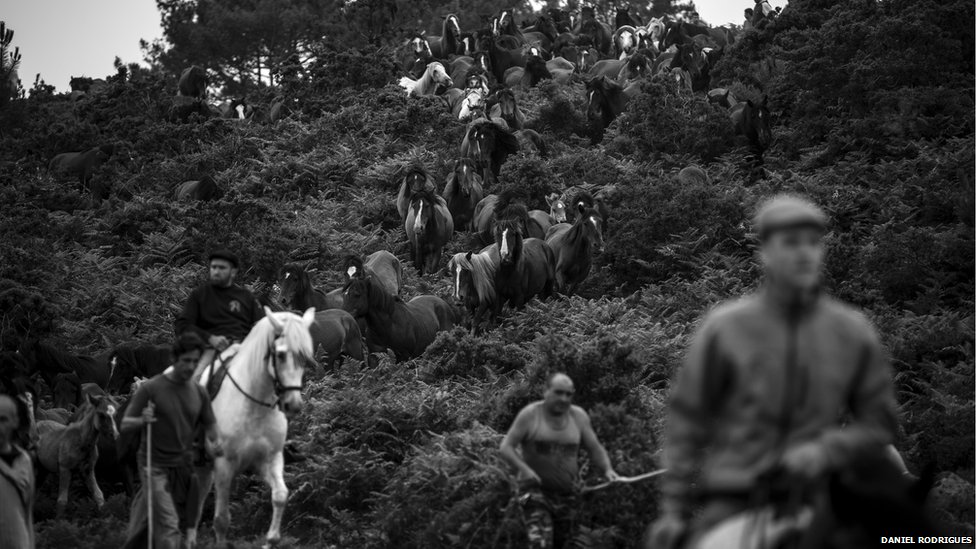 Young and old take part in the search and when they feel they have rounded up as many horses as possible, they had back down the mountain to Sabucedo.

Tourists stand on the mountainside to watch the men and horses return. 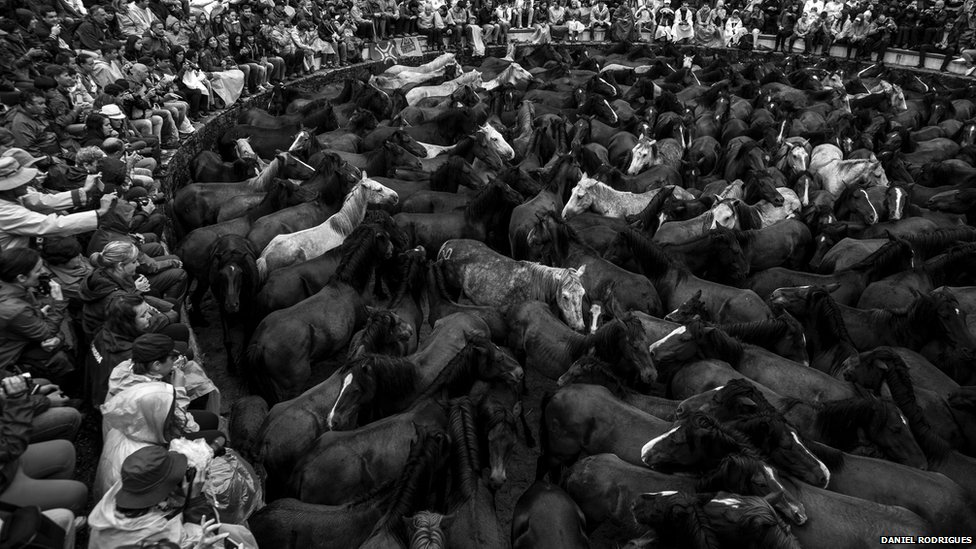 The horses are driven down the main street in the village. Their final destination is the Curro, a circular pen that resembles a gladiatorial arena.

The aim will be to force the horses, as many as 200 in number, to lie still on the ground for their manes and tails to be cut.

There are clear parallels with Spain's historical passion for bullfighting and the round-up tradition is popular throughout the Galicia region. However, the Sabucedo festival, which last four days, is the most popular and the most spectacular. 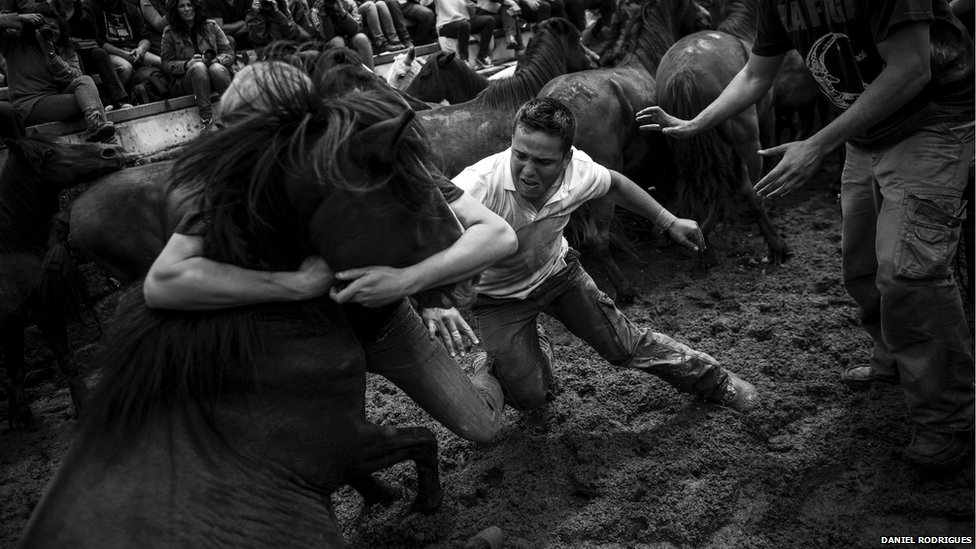 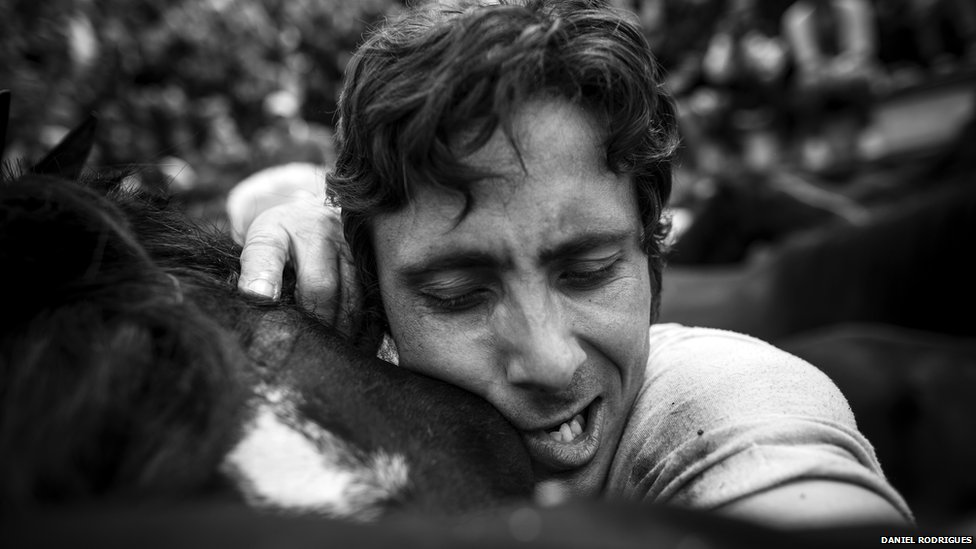 For up to two hours, a team from the village struggles with the horses in the Curro. It takes years of practice for the men and women of Sabucedo to work out how to overpower the wild horses. The children of the village look on because one day they, too, will take part.

The villagers reject the complaints of activists who condemn the brutality of the round-up. They argue part of the tradition now involves vaccination against diseases that the horses can pick up on the mountain. 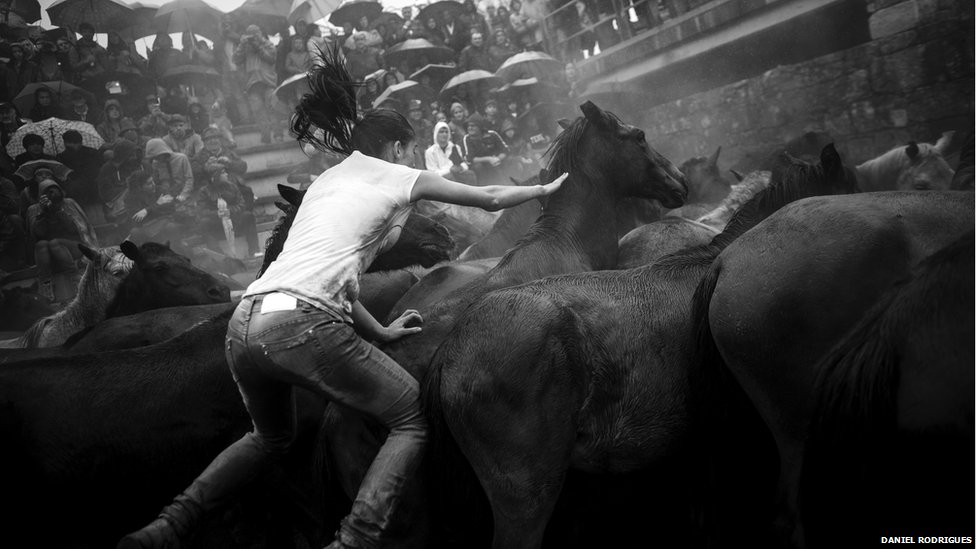 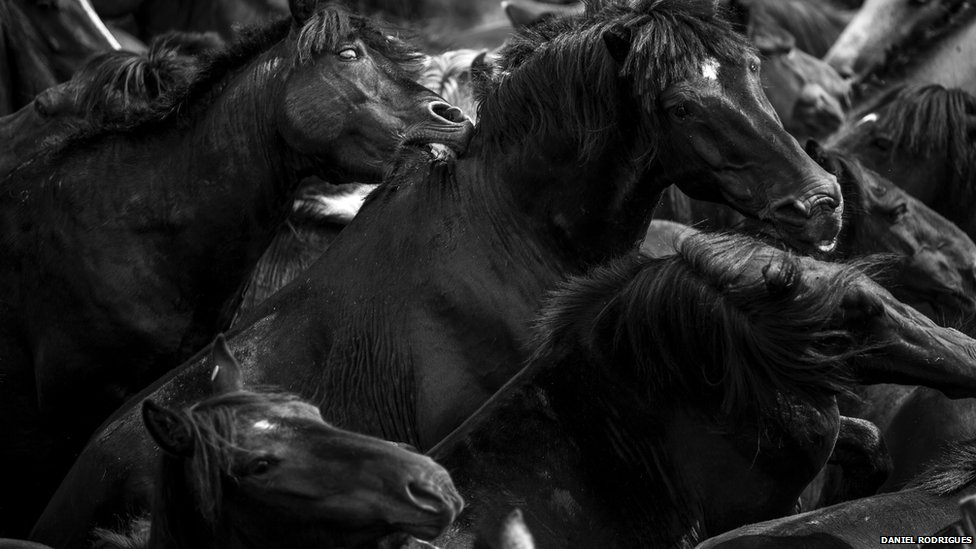 Conditions inside the arena are crowded. Visitors to the village are only allowed to watch from outside the pen, because of the potential hazards.

Critics say that the act of wrestling the horses to the ground distresses the animals. Fights between the horses are not uncommon. 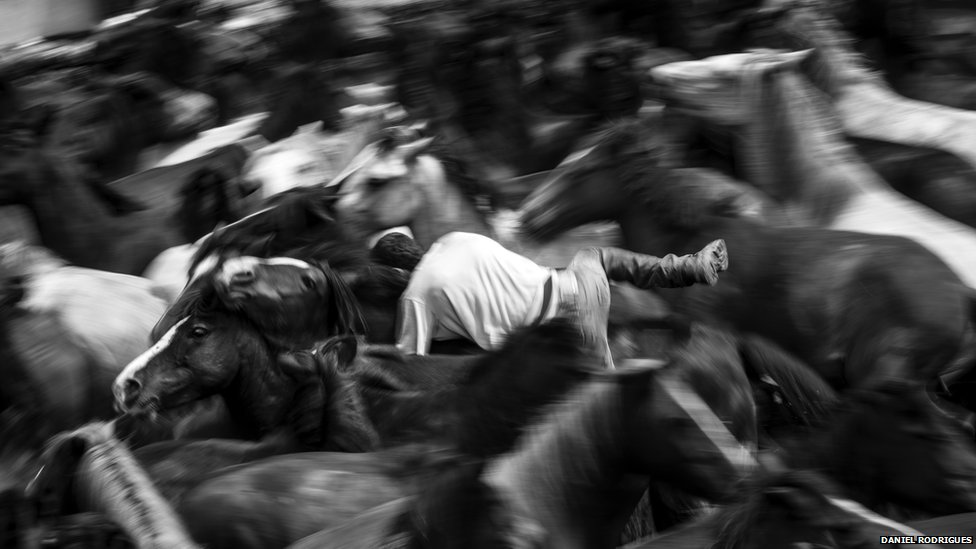 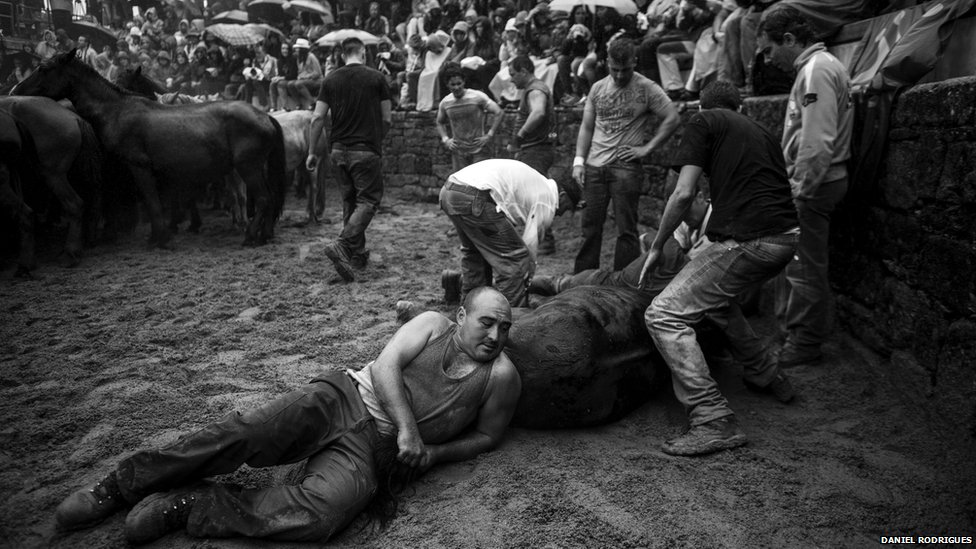 Legend has it that the strongest horses are considered sacred. So their ears are cut by villagers to differentiate them from the other animals.

Once they are brought to the ground, the horses' manes and tails are cut. Four men are usually needed for the task: two to hold the horse's head, one for the tail and a fourth who cuts the mane and tail with scissors. 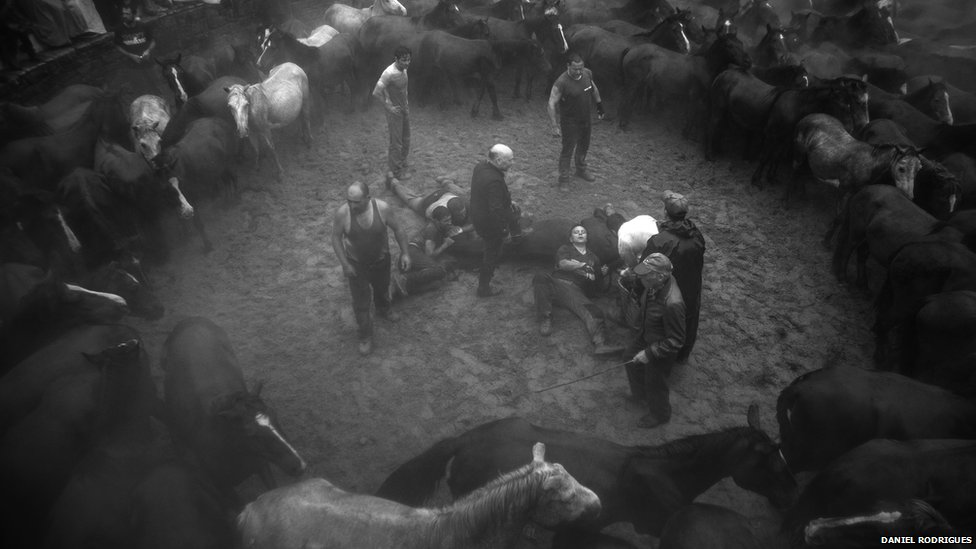 Rain and mud played a significant role in this year's round-up, which is rare even for this verdant region of Spain. By the end, the villagers are exhausted and the horses return to the mountains for another year.

When I told my wife about this, she asked why they still do it this way?

And yes, I found that a great question. The only answer that I can come up with is that they do it for all the same reason that we do Rodeo here.

American Rodeo is a way of keeping the Old West alive. Rodeo events demonstrate how hard it was to do those things in the Old West.

While today we have chutes and corrals and pens, and can sort the horses in a more efficient way, I'm thinking that those folks in Galicia are doing this to keep a tradition alive.

And frankly, from what I've been able to find out, this Spanish festival has been going on for over 400 years -- so it looks as though they have been doing just that.

During the festival, hundreds of wild horses are rounded up and wrestled to the ground by hand as part of the Rapa Das Bestas, translated as Shearing Of The Beasts.

But also, this is a branding!

Thousands of visitors descended on the small village of Sabucedo and endure temperatures of almost 104 degrees just to witness the traditional spectacle.

From what I've been told, in Portugal there is a population of free-ranging feral horses known as Garrano which range freely in the northern mountains.

Mainly used as a pack horse, for riding, and for light farm work, the Garrano, sometimes called the Minho, is an ancient breed from the north of Portugal. The Garrano mainly lives in the fertile regions of Minho and Trás-os-Montes e Alto Douro.

Genetically related to other Atlantic horse breeds, it is generally believed that the Garrano is one of the ancestors to the Galician Pony,  the Andalusian, and the Lusitano.

The Galician Pony is a breed of pony developed in Galicia, Spain. Like the Garrano, it has had an influence on the Galiceno breed in Mexico and on the American Mustang.

It is thought to have developed partly from a mix of Celtic horses, Roman horses and horses brought to Galicia by the Swabians. These "ponies" are hardy and rugged.

In the Middle Ages, these ponies were rented or swapped for other horses at the border between Galicia and Castile since the Galician Pony was more sturdy and suitable for the rugged landscape of the country.

The ponies are currently used for riding -- and, sorry to say, meat production.

A 1973 study by Pedro Iglesias estimated more than 20,000 Galician ponies are free in the mountains of Northwestern Iberian Peninsula. Nevertheless, it is thought that their numbers have probably decreased.

Once a year, a herd of Galician Ponys are driven from the mountains to the curro, where the ponies are branded and their manes and tails are cut. Some are sold, while the rest are set free again.


Over the three day Shearing Of The Beasts Festival, about 30 local Aloitadores or "Fighters" must "do battle" with the horses using nothing but their bare hands. Yes, that's right, no tools or ropes are permitted.

Three men are needed for each horse. One jumps on the horse's back while another takes hold of its neck. The third grabs the tail.

They then risk being trampled or crushed as they  wrestle the horse to the ground in order to shear it and trim its mane and tail. Younger horses that have not previously been tagged are also branded

In 2007, the festival was declared a Fiesta of International Tourist Interest by the Spanish General Secretariat of Tourism. 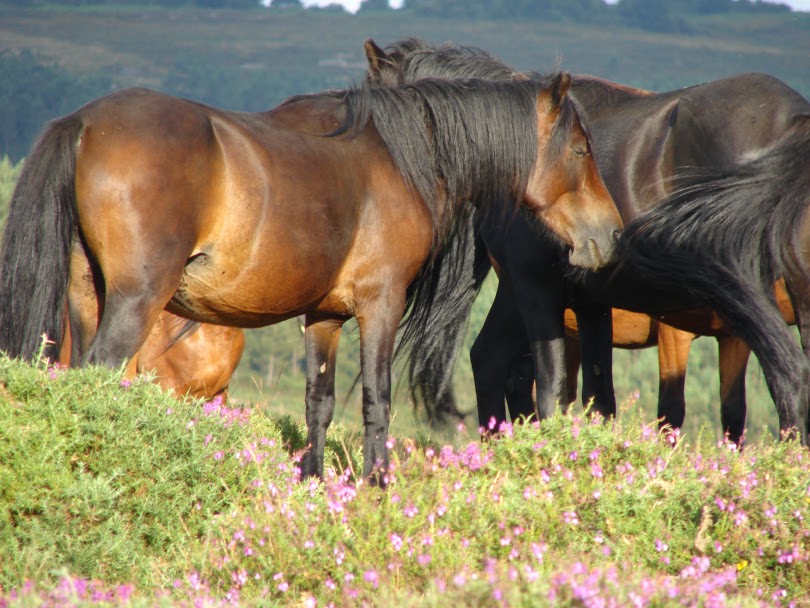 Here on the North America continent, wild horses are descendants of horses that were domesticated in Europe and brought here. Many of our wild horses can be traced to the wild horses of Galicia and others of Iberian heretage, as well as ancient prehistoric breeds now extinct.

At present, the Galician pony is regulated and protected by the Galician government, in an attempt to increase the numbers of the feral stock.

The Asociación Pura Raza Cabalo Galego (Association Purebred Horse Riding Galego), which is the official body responsible for the "Galician horse," is maintained by the Galician Government in Galicia.

In our American West, some bands of horses and burros are protected under the Wild and Free-Roaming Horses and Burros Act of 1971 while others -- sorry to say -- are not.