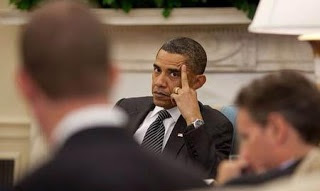 There are a number of different classifications of a terrorist act, including:

So frankly, when President Obama tries to down play terrorism in America by attempting to differentiate terrorism from gun violence, Obama is either being stupid or he is lying to the American people.

Obama, Hillary Clinton, and the rest of the Democrat Party wants to spin that fact. They want Americans to think that a planned attack on Christians is merely gun violence and nothing more than a random shooting spree. But whether or not Obama and the Democrat Party wants to acknowledge it or not, the fact is that there was indeed a terrorist attack on Oregon's Umpqua Community College designed and carried out to kill just Christians at that school.

So, Obama and that rest of the Liberals can try to lie their asses off all they want and divert the attention from what it really was to something that it was not, merely another school shooting by some screwed up student, but facts don't lie.

The is a another example of hate bearing poisonous fruit. The Liberal hatred of Christians, the war on Christians in America, has been going on with the approval of those Democrats in the highest levels of our government.

Whether he and his Party wants to admit it or not, the Left's War on Christians in America is responsible for anti-Christian Christopher Harper Mercer killing at least nine people at Umpqua Community College in Roseburg before he was killed in an exchange of gunfire with police.

Yes, Democrats made this happen!

A few weeks ago I found myself driving behind a car in the very Liberal San Francisco Bay Area that had a very disturbing bumper sticker pasted to back bumper. It read, "So Many Christians, So Few Lions."

I didn't have to wonder what would possess a person to put that on their car. After all, that was the very Liberal Bay Area and a bump sticker with an anti-Christian homicidal sentiment did not surprise me. Yes, he was probably an Atheist or a Muslim.

Now would that car get away with having a bumper sticker that read, "So Many Blacks, So Few Lynchings," or how about "So Many Muslims, So Few Drones"?

No, because that would be Politically Incorrect. But the fact is that Obama and the Democrat Party, working with their cronies in the Liberal News Media and Hollywood, have made it Politically Correct to be anti-Christian and attack Christianity at every turn.

In television shows Christians are mocked. In society as a whole Christian organizations are being forced to forsake their religious beliefs to meet government mandates in Liberal programs. And yes, the Supreme Court which is stacked with Liberals can find that Christian prayer is not aloowed in schools, but Muslim prayer is OK.

And how about during Christmas, Christians are deprived of their ability to worship or openly demonstrate their beliefs. Even the United States military which consists primarily of Christians is under attack by Obama and Democrats in Washington D.C..

Yes, in our military, Christians are being ordered not to carry their Bibles and are even being threatened if they attend Christian Services. All of which is Political Correct in an era of war on Christianity in America.

And yes, I know someone will surely write me to tell me how Obama invited Pope Francis to the White House and that Congress invited him to speak. I also know that the only reason that Obama and the Democrats were in favor of his being invited to the White House and Congress is because Pope Francis is more Politician than he is Holy man and Priest.

The Pope was invited because he believes in the Global Warming scam and is a mouth-piece for the Environmental hoaxsters out there. Yes, I'm talking about those folks who are getting richer by fraudulent means. Pope Francis was also raised in a Socialist / Communist nation and believes in that doctrines. And yes, Pope Francis said, "You’re not a Christian if you own a gun?"

He is also said to be "re-thinking" the Catholic Church's position on both abortion and being gay. So yes, since all of Pope Francis's political positions are the same as Obama's and those in the Democrat Party. Knowing that, it is not a surprise that Obama and his party would invited the Pope to the White House. Especially since his visit means that they can put a moral spin on their Leftist Ideology.

Frankly, Democrats, the Liberal Left, will use anything to wage war on Christians. Fact is Leftist see their Ideology as being their religion. They will to anything and use anyone to meet their goals of making America an anti-Christian nation. The reason is they see Christianity as an obstacle to their agenda of CHANGE for the worse.

Please don't kid yourself, it is a war waged by Atheist Liberals and Islamic sympathizers who know better than attack Muslims or even attempt similar restrictions on anti-American Muslim sects.

While Obama supports the spread of Islam in America, he and the Democrat Party looks the other way when it comes to Muslim honor killings, Islam's approval of child rape and pedophiles, or their desire for Sharia Law.

Obama and the Democrat Party, yes the Liberal Left, wages a relentless war on pro-American Christians in almost every aspect of American Society. From the benign Christmas tree to the assault on Christians in our military, Obama and the Left has encouraged hate for Christians. Yet, they look the other way when it comes to religious rites of Muslims.

So yes, while Liberals want us to focus on the guns used, America must focus on how the killer who perpetrated his terrorist attack at an Oregon community college specifically targeted Christians. And please don't kid yourself, Democrats want to completely ban all guns and void our Constitutional Rights -- all while they use this terrorist attack to get what they want.

Forget that Obama and those on the Liberal Left such as Clinton and Sanders and Biden never make mention of the gun violence in Chicago which provides a huge body count of shooting victims every weekend. Yes, every weekend!

A weekend or so ago it was reported that at least 50 people were killed in Chicago. But we will not hear Obama or any of his Socialist friends talk about that, the reason is that Chicago has the strictest Gun Control laws in the entire nation and it is mainly Black on Black crimes. These facts do not serve their goal of obtaining a total gun ban and abolishing the 2nd Amendment.

No, Chicago won't help the Left get Americans to rally around a gun ban because Americans understand the reason for the killings every weekend. Americans understand that the animals in the inner-city who are doing such crimes have absolutely no respect for human life and murder each other with callous disregard of how that effects those left to morn. Americans also know that Obama might be concerned about a white-American shooting a black-American, but is not concerned about black on black crime in the inner-cities.

The anti-Christian terrorist that killed so many in Oregon specially targeted Christians for death because of the indoctrination of hate that he has received from his anti-Christian family and others -- including the Obama administration and the Democrat Party, the Liberal Left.

Yes, I really believe that when people look for the reason for this heinous act, we should not focus on the gun or making new gun laws that have no effect on the lawless -- instead we should focus on this being the result of a concerted campaign to attack Christians in America.

Janet Willis told the Los Angeles Times that her 18-year-old granddaughter, Ana Boylan, had been shot in the back and was airlifted to a hospital in Eugene. Willis said Boylan told her that the gunman asked others in the classroom to rise and state their religion.

"If they said they were Christians, they were shot again," Willis said. "[Boylan and another wounded girl] just laid on the ground and pretended they were dead."

Kortney Moore, 18, told the Roseburg News-Review that the shooter burst into the room and ordered students to get on the ground. Then he ordered people to stand up and state their religion. He shot the Christians.

It was reported that the killer Christopher Harper Mercer falsely listed himself as a "Conservative Republican" instead of a Christian hating Democrat on a dating website. I believe he acted as a true disciple of the Liberal Left, the Democrat Party, those who encourage hate for Christians. He is the result of their anti-Christian agenda. He is their child.

So while Obama and the Democrats try to turn the focus of this horrendous attack on the guns used, we should recognize that Obama and the Liberal Left is responsible for this taking place.