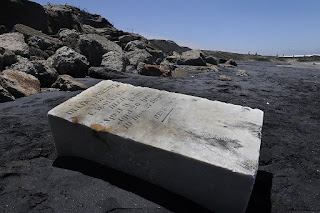 Ever wonder why tombstones would suddenly appear on a San Francisco beach?

The first time that I heard about this was back in the spring of 1977 when I was still in the Marine Corps. I was on leave visiting my parents when a newspaper story caught my eye. It was a story that I've never forgotten.

The story was that strong winds, cross currents, and shifting sands across the bay had exposed a very eerie reminder of San Francisco's past: Tombstones appeared on a beach there.

Back in 1977, the San Francisco Chronicle newspaper wrote about the gravestones surfacing on Ocean Beach and how "beachcombers" were stunned. One observer at the time said that finding them was "the strangest stuff I've ever come across in a city that's weird enough."
Exposed for all to see were the discarded tombstones, gravestones, both broken and intact, of people who had died in the 1800s and very early 1900s. All from the graves of many who were surely beloved. And besides the fact that there was an old mausoleum near the intersection of Rivera Street and the Great Highway on Ocean Beach, a number of tombstones were used to shore up the seawall at Ocean Beach. When this story first broke back in 1977, people were fairly alarmed by what had risen up from San Francisco Bay. Then as with most things, the uproar over the tombstones died off as soon as the drifting sands covered them up again.

Fast forward to 2012, when on June 8th of that year, the tombstones became visible again. That was when many of the marble and granite tombstones once marked the final resting places of citizens long dead decided to let it be known that they are indeed beneath the bay. One of the headstones is the nearly intact marble tombstone of Delia Presby Oliver, who died at the age of 26 on April 9th, 1890. Delia Presby Oliver's grave marker is a solid piece of marble that was meant to last an eternity. 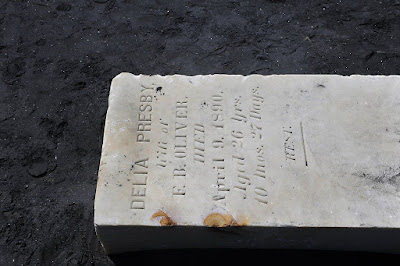 Delia Presby Oliver's tombstone, nearly as intact as the day it was carved more than 125 years ago, was uncovered in black sand near the end of Rivera Street. She was a member of a prominent family. Her father, David Shattuck, was born in New England and served on the San Francisco Board of Supervisors. Her parents lived on very wealthy Nob Hill.

Delia Presby was born in San Francisco in 1863 and married Frank B. Oliver on October 27th, 1885. She passed away less than five years later. At the time, newspapers did not report the cause of her death. But a notice in the San Francisco Call newspaper on April 10th, 1890, said, "Friends and acquaintances are respectfully invited to attend the funeral services. From the residence of her parents No. 814 Powell Street. Internment private."

While newspaper reports back then really don't make it clear where Mrs. Oliver was buried, it is likely that a person of her social standing might have been interred in the Laurel Hill Cemetery. Back then, it extended south and west of California Street to near what is now Presidio Avenue.

The nearly intact marble tombstone of Delia Presby Oliver makes me wonder what unmarked grave she is in today? Her remains were removed and reburied when San Francisco authorities closed nearly all the city cemeteries and moved their dead to Colma during the 1920s and 1930s just to make room for more buildings.

If you've never heard of Colma, California, it is a true "City of the Dead" with the majority of that city being made up of graveyards. Colma became the site for numerous cemeteries when San Francisco, the city's powerful neighbor to the north, passed an ordinance in 1900 outlawing the construction of any more cemeteries in the city of San Francisco. The reason for the San Francisco ordinance was money. Increased property values made the cost of using land for cemeteries prohibitive.

After the first city ordinance, San Francisco then passed another ordinance in 1912 "evicting" all existing cemeteries and those buried there from city limits. Yes, that was when the politicians in San Francisco decided to move the cemeteries out of the city. With that decision the Catholic, the Jewish, the Masonic, and even the Chinese cemeteries among others were all destroyed.

It is a fact that Mrs. Oliver's original tombstone and thousands like it were used as landfill or in other ways throughout San Francisco. And it is also a fact that thousands of people now rest in unmarked graves because of the decision to close those cemeteries and relocate those buried in the city by the bay.

One lawman who was relocated to Colma was San Francisco Officer Alexander Grant who was shot and killed by a suspect that he had just arrested for public drunkenness and disturbing the peace on Folsom Street between 4th and 5th Streets.

On September 11th, 1891, the suspect resisted arrest and at some point drew a gun and shot Officer Grant in the head -- killing him instantly. The suspect was an actor by the name of Maurice B. Curtis who was said to be very famous at the time.

Just as today, money can buy almost anything including a jury. So by 1893 after four trials, two hung juries, and one dismissal, he was acquitted. A few weeks later a prominent politician and a California State Senator was arrested for bribing four members of the jury. Curtis spent most of his fortune to gain his freedom and his acting career was ruined. Thankfully, Curtis died in Los Angeles on December 29th, 1920, a pauper.

His tombstone was removed and is thought to have been dumped in the bay. As for Officer Grant, it is thought that his remains are now in some unmarked grave at Woodlawn Cemetery in Colma. While that's the hope, some think the old lawman may be buried under the University of San Francisco.

Of all, Laurel Hill Cemetery was one of the last to be closed. In 1937, The San Francisco Chronicle newspaper described the Laurel Hill Cemetery  as "a silent city of the dead." Records show that there were at least 35,000 men, women and children buried there, all were removed to make way for the Laurel Heights development. And yes, it is believed that most of the western part of the city of San Francisco was actually built atop old cemeteries -- that included housing developments, shopping centers, and even the sprawling campus of the University of San Francisco.

On historian is reported to have said, "They found hundreds of bodies when they did seismic work at the Palace of the Legion of Honor, It was pauper's cemetery. And there are literally hundreds of bodies under the Lincoln Park Golf Course. No one kept track of them all."

In established cemeteries, like Laurel Hill and Calvary on Geary Boulevard, it is said that "The remains of the loved ones were removed at no cost, but if you wanted to remove a headstone, or a funerary building, the family had to pay the cost." Because this was taking place during the financially hard pressed days of the Great Depression, many families could not afford to pay the cost to relocate their loved one's headstones and opted for city markers. Those city markers were soon lost or discarded. So soon enough, the result was that many of San Francisco's relocated dead now rest in unmarked graves.

The tombstones left behind were confiscated by the city to use in various city projects. Some say that the stones of graves were sold to crooked San Francisco contractors as material to be used to build the seawall along the Great Highway. And yes, it is believed that large tombs and crypts were also torn down to be dumped into San Francisco Bay to shore up the seawall at Ocean Beach, all while other grave makers were used to line the gutters of Haight-Ashbury's Buena Vista Park.

And yes, as for you Old West history buffs, if Colma rings a bell, it's because you recognize the city of Colma as the place where Wyatt Earp is buried next to his wife, Josephine Marcus Earp. They are buried side-by-side in Hills of Eternity and Home of Peace Cemetery there.

As for the tombstones on reappearing, local historians in San Francisco seem mixed as to the importance of the find back in 1977 and again in 2012. One is supposed to have said, "They turned up some years ago in about the same place. There was a big fuss, and then they were covered up again. How soon we forget." And frankly, I believe that person is correct. In 2012, a spokeswoman for the Golden Gate National Recreation Area, which manages Ocean Beach, acted as though this was really no big deal saying, "This happens every once in a while. It's been a crazy year for sand." Of course, back then the Park Service had no plans to remove the gravestones believing eventually they'll be covered again by the drifting sand. Imagine that.

Because of the lingering drought, these days one can actually see many of the towns that were submerged under what would become needed lakes and reservoirs. This is especially true since our drought has sent our lakes and reservoirs to their lowest levels since the mid-1970s. Just as with those towns of years gone by, it is believed that it's only a matter of time before the sands shift and the tombstones of San Francisco's ghosts rise up from San Francisco Bay once again.