Christmas Traditions -- "Yes, Virginia, there is a Santa Claus."

Dear Friends, as I stated in the last two posts, a few of you have written to ask about my Christmas traditions. And as I've said, I do have a couple of personal things that I do each year at Christmas just for myself.

Almost every year, I have alternated between reading O. Henry's "The Last Leaf" and "The Gift of the Magi", and reading the Sept. 21st, 1897, editorial response by the Editor of The (New York) Sun newspaper which is now simply known as "Yes, Virginia, there is a Santa Claus."

I believe that besides reading of the account of the birth of Jesus Christ on Christmas in the Bible, these stories are very inspirational. I hope you enjoy this as it was published in 1897.

Is There a Santa Claus?

DEAR EDITOR: I am 8 years old.
Some of my little friends say there is no Santa Claus.
Papa says, "If you see it in THE SUN it’s so."
Please tell me the truth; is there a Santa Claus?

Here is the Editor's response:

VIRGINIA, your little friends are wrong. They have been affected by the skepticism of a skeptical age. They do not believe except they see. They think that nothing can be which is not comprehensible by their little minds. All minds, Virginia, whether they be men’s or children’s, are little. In this great universe of ours man is a mere insect, an ant, in his intellect, as compared with the boundless world about him, as measured by the intelligence capable of grasping the whole of truth and knowledge.

Yes, VIRGINIA, there is a Santa Claus. He exists as certainly as love and generosity and devotion exist, and you know that they abound and give to your life its highest beauty and joy. Alas! how dreary would be the world if there were no Santa Claus. It would be as dreary as if there were no VIRGINIAS. There would be no childlike faith then, no poetry, no romance to make tolerable this existence. We should have no enjoyment, except in sense and sight. The eternal light with which childhood fills the world would be extinguished.

Not believe in Santa Claus! You might as well not believe in fairies! You might get your papa to hire men to watch in all the chimneys on Christmas Eve to catch Santa Claus, but even if they did not see Santa Claus coming down, what would that prove? Nobody sees Santa Claus, but that is no sign that there is no Santa Claus. The most real things in the world are those that neither children nor men can see. Did you ever see fairies dancing on the lawn? Of course not, but that’s no proof that they are not there. Nobody can conceive or imagine all the wonders there are unseen and unseeable in the world.

You may tear apart the baby’s rattle and see what makes the noise inside, but there is a veil covering the unseen world which not the strongest man, nor even the united strength of all the strongest men that ever lived, could tear apart. Only faith, fancy, poetry, love, romance, can push aside that curtain and view and picture the supernal beauty and glory beyond. Is it all real? Ah, VIRGINIA, in all this world there is nothing else real and abiding. 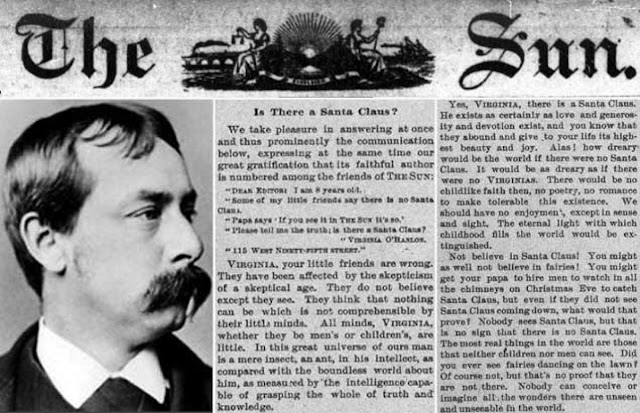 The editorial appeared in the September 21, 1897, edition of The (New York) Sun and has since become part of popular Christmas folklore in the United States. It is the most reprinted editorial in any English-language newspaper.

Francis Pharcellus Church is the author of the famous editorial. He was an American publisher and editor. He was a member of the Century Association.

He was born in Rochester, New York on February 22nd, 1839, and he graduated from Columbia College of Columbia University in New York City in 1859.

With his brother William Conant Church, they established The Army and Navy Journal in 1863, and Galaxy magazine in 1866 which merged with Atlantic Monthly after 10 years.

He was a lead editorial writer on his brother's newspaper, The Sun, and it was in that capacity that he wrote his most famous editorial, "Yes, Virginia, there is a Santa Claus" in 1897.

Mr. Church was a war correspondent during the American Civil War, a time that saw great suffering and a corresponding lack of hope and faith in much of society. Although the paper ran the editorial in the seventh place on the page. Even though it seemed hidden beneath ads, it was well-received by readers.

So How Did This All Start?

In 1897, Dr. Philip O'Hanlon, a coroner's assistant on Manhattan's Upper West Side, was asked by his then eight-year-old daughter,Virginia O'Hanlon (1889–1971), whether Santa Claus really existed.

O'Hanlon suggested she write to The Sun which was a very prominent New York City newspaper at the time, assuring her that "If you see it in The Sun, it's so."

In so doing, Dr. O'Hanlon had unwittingly given one of the paper's editors, Francis Pharcellus Church, an opportunity to rise above the simple question and address the philosophical issues behind it.

More than a century later it is the most reprinted editorial in any newspaper in the English language.


"Yes, Virginia, there is (a)..." has become an idiomatic expression to insist that something is true.

In December 2015, Macy's department store in Herald Square, New York City, NY used Virginia's story for their holiday window display. Illustrated in three-dimensional figurines and spanning several windows on the south side of the store along 34th Street between 6th and 7th Avenues. This version of "Yes, Virginia" is based on the 2010 television series of the same name, starring Neil Patrick Harris and Bea Miller.

So who was Virginia O'Hanlon?

Laura Virginia O'Hanlon was born on July 20, 1889, in Manhattan, New York. At the age of 21 in 1910, she married Edward Douglas. Their marriage was brief, and ended with him deserting her shortly before their daughter, Laura, was born.

In the 1930 United States Census, she was listed as divorced but kept her ex-husband's surname the rest of her life -- "Laura Virginia O'Hanlon Douglas."

Virginia received her Bachelor of Arts from Hunter College in 1910, a Master's degree in education from Columbia University in 1912, and a Doctorate from Fordham University. She was a school teacher in the New York City ISD. She started her career as an educator in 1912, became a junior principal in 1935, and retired in 1959.

Virginia received a steady stream of mail about her letter throughout her life. She would include a copy of the editorial in her replies. In an interview later in life, she credited it with shaping the direction of her life "quite positively."

Virginia died on May 13, 1971 at the age of 81, in a nursing home in Valatie, New York. She is buried at the Chatham Rural Cemetery in North Chatham, New York.

In 1971, after seeing Virginia's obituary in The New York Times, four friends formed a company called Elizabeth Press and published a children's book titled Yes, Virginia that illustrated the editorial and included a brief history of the main characters.

It's creators took it to Warner Brothers who eventually made an Emmy award-winning television show based on the editorial.

The History Channel, in a special that aired on February 21, 2001, noted that Virginia gave the original letter to a granddaughter, who pasted it in a scrapbook. It was feared that the letter was destroyed in a house fire, but 30 years later, it was discovered intact.

Every year, Virginia's letter and Church's response are read at the Yule Log ceremony at Church's alma mater, Columbia College of Columbia University.

The story of Virginia's inquiry and The Sun '​s response was adapted in 1932 into an NBC produced cantata, the only known editorial set to classical music, a segment of the short film Santa Claus Story (1945), and an Emmy Award-winning animated television special in 1974, animated by Bill Meléndez who had worked on various Peanuts specials.

In 1991 it was adapted into a made-for-TV movie starring Richard Thomas and Charles Bronson. In 1996, the story was adapted into an eponymous holiday musical by David Kirchenbaum (music and lyrics) and Myles McDonnel (book).

The last two paragraphs of Church's editorial are read by actor Sam Elliot in the 1989 film Prancer, about Jessica Riggs, a little girl who believes the wounded reindeer she is nursing back to health belongs to Santa. Jessica's story inspires the local newspaper editor, as Virginia's letter did to Church, to write an editorial which he titles Yes, Santa, there is a Virginia.

On September 21, 1997, the 100th anniversary of the editorial's original publication, The New York Times published an analysis of its enduring appeal.

In 2003, "Yes, Virginia, there is a Santa Claus" was depicted in a mechanical holiday window display at the Lord & Taylor department store on Fifth Avenue in Manhattan.

In 2009, The Studio School in New York City, honored Virginia's life and legacy. Janet C. Rotter, Head of School, announced the establishment of the Virginia O'Hanlon Scholarship, speaking passionately about their commitment to offering need-based scholarships for students of merit.
Virginia's descendants continue her legacy.

From my family to yours, Merry Christmas! May God Bless you and yours!
Tom Correa