I Agree With Donald Trump 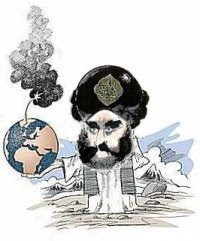 OK, so Republican presidential candidate Donald Trump said that he would stop Muslims from entering the United States -- that includes Muslim students, tourists, refugees, and of course potential terrorist.

Wait, did I say he wants to keep out potential terrorists? Yes, he does. Imagine that. That is quite a change in policy over the present policy of allowing anyone in -- even if they hate us.

While Trump's call for a complete shutdown of Muslims entering the United States has drawn condemnation from Muslim groups, Democrats, and even Trump's Republican rivals, is anyone really surprised that they would not agree with Trump.

Friends, Muslim groups such as and associated with the likes of CAIR, the Muslim Brotherhood, and the Nation of Islam want to kill Americans. Of course they don't want the door secured and the bad guys kept out.

When did it happen that stupid and reckless abandonment of security for our nation became values of the Republican Party? When did it take place that Republicans stopped caring about the safety of the American people just to appease United Nation refugee mandates and an administration that doesn't give a shit about our security?

This is not about some passage of a poem on the Statue of Liberty, or the Democrat idea that there should be no borders. This is about the security of our nation and the protection of our people. Yes, this is about the reason that our government was created in the first place. This is about providing for the common defense of the United States.

And guess what, limiting access is as old a basic principle of security as one can possible find.

Security is the degree of resistance to, or protection from, harm. It applies to any vulnerable and valuable asset, such as a person or many people, homes, businesses, organizations, groups, events, gatherings, towns, cities, small communities and big, state and nation.

There are a number of security measure we take every day. We limit access to our bank accounts, our computers, our cars, homes, businesses and so on. When I was a young Marine, one of my first duties was to be assigned to the security of Nuclear Weapons.

As with most types of physical security, we are talking about security measures designed to deny unauthorized access to facilities, equipment and resources, and to protect personnel and property from damage or harm. In the case of store security, the primary threat is theft. In the case of Nuclear Security, the primary threats were espionage and sabotage.

The primary threat involved with allowing un-screened or inept screening to take place is terrorist  attacks that result in the deaths of Americans. Yes, Americans which may include your family members.

So, why do I support Donald Trump's call for a temporary halt to Muslims seeking to enter the United States -- including Muslim students, tourists, refugees, and of course potential terrorist?

It is simple, I treasure your life and the life of members of your family. I was a Security Consultant for years, and I can tell you that physical security involves the use of multiple layers of interdependent systems -- which include surveillance systems, security guards and the incorporation of patrol procedures, barricades, protective barriers, locks, and of course access control. Yes, access control.

Good security is about controlling access to those you want to keep safe. The first rule is to keep the bad guys out. How you do that means limiting who can come in. Screening protocols will establish who you allow in and who you try to keep out.

This is not brain surgery. This is basic security, basic self protection when there are bad guys who want in to harm you and yours.

Whether all of the Republicans who just chastised Trump over this understand it or not, this is not about values of "who we are" but about losing American lives to people extremely determined to kill Americans.

Pertaining to Donald Trump's comments, comments that I believe reflect the feelings of a great number of Americans, Jeb Bush tweeting that Trump "is unhinged". Carly Fiorina called the proposal an "overreaction [as] dangerous as President Obama's under-reaction." I just hope these two have the guts to tell that to the families of the victims of the next Muslim terrorist attack which could have been prevented if we halted Muslim entry until we have a better screening system. But believe me when I say, as with Paul Ryan, they won't.

Trump’s proposal has come five days after Muslim terrorists killed 14 people and injured 21 at a Christmas office party in San Bernardino, California, all while President Obama is determined to relocate tens of thousands of Syrian refugees in the United States.

The head of the FBI stated that there is no question that Syrian refugees CANNOT be effectively screened. Because of what the head of the FBI says, I feel that Donald Trump has bravely stepped forward to take on the task of the first duties of president.

Trumps's proposal: "Until we are able to determine and understand this problem and the dangerous threat it poses, our country cannot be the victims of horrendous attacks by people that believe only in Jihad, and have no sense of reason or respect for human life."

Yes, the first duty of a president is not to worry about appeasing the United Nations or bowing to Muslims who want us dead. It is to protect us, our homeland, our nation, America.

It's not surprising that Muslim leaders expressed outrage at the idea. And really, who is really surprised when Hillary Clinton called the proposal "reprehensible, prejudiced and divisive."

And really, who is surprised that the openly avowed Socialist, a Democrat who has constantly demonstrated his hatred for the United States, Bernie Sanders said "Trump and others want us to hate all Muslims."

And by the way, for you people out who agree with Hillary and Bernie, those of you who believe in Open Borders -- why don't you take the locks off the doors of your homes? Why don't you make the place where you live like the America you want?

Like the Democrats who are always bad mouthing the Police yet need them, or want guns banned yet called to borrow one during the Rodney King riots in Los Angeles, you should practice what they preach and leave the doors to your home open to all. Ask yourself if you are really OK with letting in the known and the unknown?

Would you open your doors and allow all to access your home? I wouldn't. Friends and family can get in if they want and need to, and no one else has the need without my permission.

Security is a big deal to me and maybe that's way I see this as being a big deal. That's the reason that I think Donald Trump is right. The people he is talking about keeping out, until we can truly determine their background and intentions, are among the Syrian refugees that Obama wants to bring here.

Trump is right because experts have already determined that ISIS members and sympathizers are among them. That is a fact not up for debate. And frankly, that makes Trump's proposal a good start to control access and safeguard the American people.

And frankly friends, why should we allow citizens to put all of us at risk because of some political agenda? Besides, since Trump is talking about a halt until a better system is in place, I'd really like to know why it's so important to politicians that the American government to act in hast?

Why is it so important that we allow would-be terrorists to enter America right now? What is wrong with getting a better system in place before moving forward?

How about we funnel some of those funds to create protocols and a screening system that can keep us safe today by limiting access as to who comes in and who doesn't? America is our home, why are we not securing it in the same why that we do the homes we live in? We should.

UPDATE: I have received a lot of email over this telling me that I'm talking about taking away people's rights. First, I've read the Constitution a number of times and cannot find where we cannot keep out FOREIGNERS who are a threat. Second, no matter what Democrats and Liberals and RINOs say, FOREIGNERS do not have the rights of American CITIZENS. That is a fact, so keeping out FOREIGNERS because they pose a possible threat to our nation is well within the law.