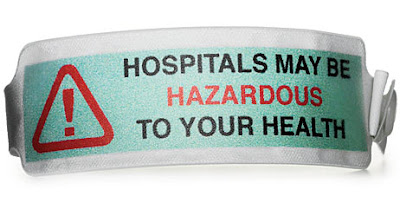 In my case it had to do with my being prescribed an increase in high blood pressure medicine. The increase dropped my blood pressure to dangerously low levels. My wife rushed me to the ER and they couldn't believe that I was even on such medicine.

So now you say, that was me but really how big a problem can it be? And frankly, I can understand how people can be a little suspect that I may be blowing things out of proportion. When I told a friend that I was doing this article, he asked, "Is it really dangerous or am I just exaggerating the problem?"

How bad is Medical Errors in America?

Well, a report came out on May 4th, 2016, which speaks directly to the dangers of going to a hospital, or being treated by people who we are conditioned to trust. Yes, dangers! Dangers because the studies revealed that Medical Errors are the 3rd leading cause of deaths in the United States.

Yes, Medical Errors are now the number three killer in America right behind Heart Disease and Cancer.
In fact, if we combine all of the annual deaths from guns, suicide, and car accidents, then double that amount, and that still wouldn't add up to the known 251,454 people the Johns Hopkins Hospital researchers estimate have lost their lives to medical errors each year. And guess what, another report stated that that figure is only half of the true number. 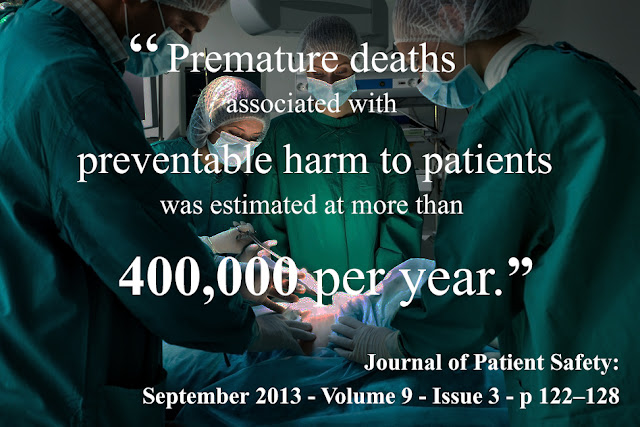 Yes, according to the studies, the 250,000 number may be understating things. It may be much much higher. As stated in the study: "We believe this understates the true incidence of death due to medical error because the studies cited rely on errors extractable in documented health records and include only inpatient deaths."

Those records are hampered by the way we report medical errors: poor to none is what the researchers found. Why, well because the CDC doesn't even track these deaths. And frankly, even the New York Times has noted that Medical Error is not a cause of death that would appear on a death certificate.

While the researchers of this study would like to see a "preventable complication" field added to death certificates, they know full well that that will never happen because it opens Medical practitioners up to lawsuits.

The study notes that "the most commonly cited estimate of annual deaths from medical error" is a 1999 Institute of Medicine report that put the ceiling at 98,000 deaths, and the head of health care quality at Beth Israel Deaconess Medical Center tells the Washington Post that what's happened in the 17 years since that report is "discouraging and alarming": Basically, there has been no improvement, with the exception of hospital-acquired infections.

So now, we demand mental health screening and Background Checks for citizens wanting to purchase a firearm but we do not require any sort of screening process of people who have our life in their hands?

And yes, besides killing over a quarter of a million Americans each year, the people making these "errors" are what is driving Heath Insurance through the roof. Our Heath Insurance costs go up because of someone's decision and that creates deaths, lawsuits, and higher Malpractice Insurance premiums which are passed on to us.

Now, I would like this cause of death to be called "Staff Incompetence," but that's just me. You see, I feel calling a bad or wrong decision by a medical staff a "Medical Error" -- that only downplays the fact that their decision resulted in the death of someone in their care.

Calling someone's death which resulted by "medical error" downplays the fact that it was someone's fault, lapse of judgement, someone's transgression or wrongdoing.

So where's the hoopla? Why isn't there regulations as to how long one can work a shift and still make decisions? Why isn't their screenings to find out if a person is even qualified to prescribe or administer medications? Why isn't there Background Checks to stop practitioners who have had one too many malpractice lawsuits, or has had mental health problems?

Why not vet those in the medical profession with the same concern that we do someone buying a gun? After all, we should not give a free pass to heath care professionals who are administering medications and treatments that can kill us -- and are doing just that!