Living history exhibits are extremely important when trying to teach others about days gone by. That is true today since a lot of young people see history as boring and not interesting.

Events like the Kit Carson Mountain Men "Days of '49" Wagon Train shows the public just how "The 49ers" traveled from the East over the Great Plains to California.

The "Days of '49" is the perfect living history classroom because people are taken in by the wonder of the covered wagons, the assorted breeds of horses, the mules, the teamsters, the cowboy and cowgirl reenactors, and the beauty of the parade. The entire presentation teaches how life was during the great Western migration from Missouri to Oregon and California from the 1830's to 1869.


The authentic wagon train of a dozen horse-drawn covered wagons followed California's "Golden Highway," more commonly known as Highway 49, on a 3 day journey. They started at an encampment at the Amador County Fairgrounds in Plymouth, and headed south through Drytown, Amador City, Sutter Creek, and into Jackson. All as a celebration of California’s pioneer heritage.

Of course, the public was encouraged to join in on the fun and visit with the teamsters, the cowboys and cowgirls, and the other reenactors at the various stops along the way.

The great food was catered by the wonderful folks of the Laughton Ranch. The music was great and everyone enjoyed the entertainment, the horses, the vintage wagons, and of course those who were making the effort to keep Old West history alive.

While my wife and I sat eating, we struck up a conversation with another couple sitting near us. Come to find out, they owned one of the covered wagons. Well, soon enough, we started talking history of the wagon trains and their love of the history of that era.

Yes, Dennis and Antonia Amaral have been involved in wagon trains, the horses needed to pull them, the equipment, tack, and all other aspects of what's needed for wagons for a little over 8 years. And yes, I enjoyed hearing how they actually put on presentations about wagons and other aspects of Old West history at local schools up near their home in Pilot Hill.

They are great folks who are just as friendly as one could wish to meet. I loved how they were so involved in keeping our Old West history alive. I admired both for their dedication in getting every little detail historically accurate. And yes, I admired how they endured my questions and didn't find me too much of a bother.

On Sunday, May 1st, the Wagon Train left their Kennedy Mine encampment and traveled down Jackson Gate Road and then onto North Main Street to Main Street Jackson.

By 11:00am, more or less, the Kit Carson Mountain Men Wagon Train "Days of '49" Parade began at Main Street Jackson. And yes, all who lined the streets included my wife and I were there for the parade. This time, I had my camera ready to take as many pictures as possible. 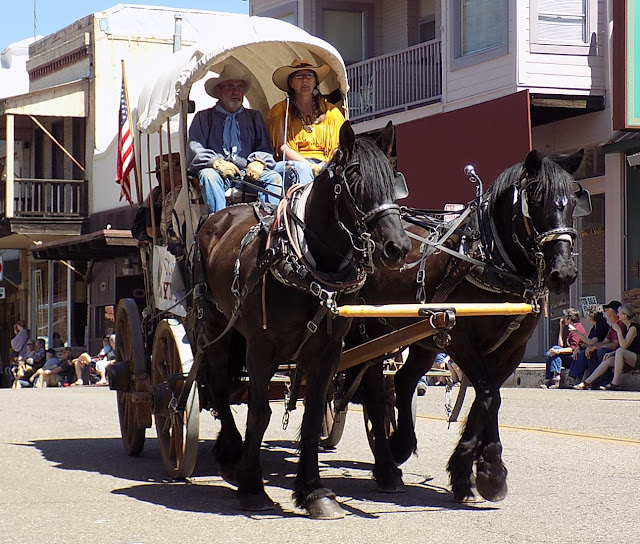 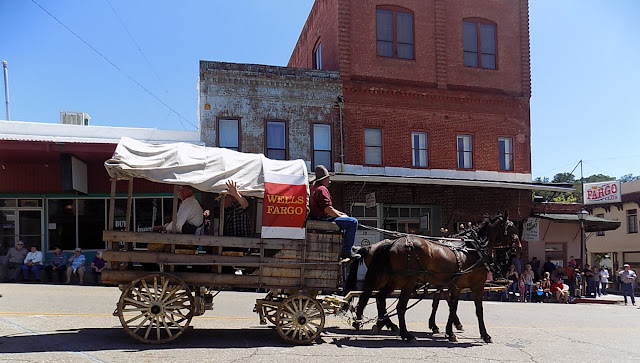 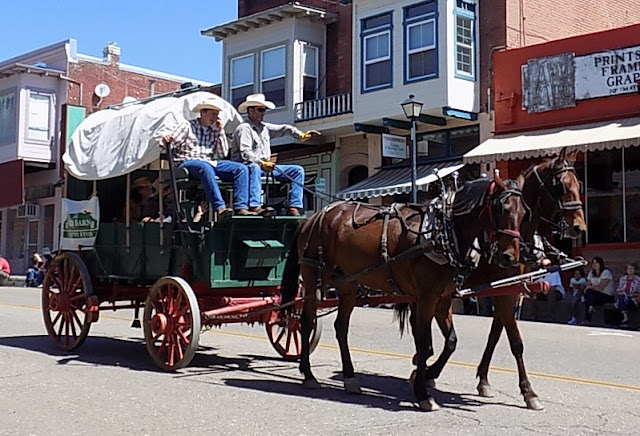 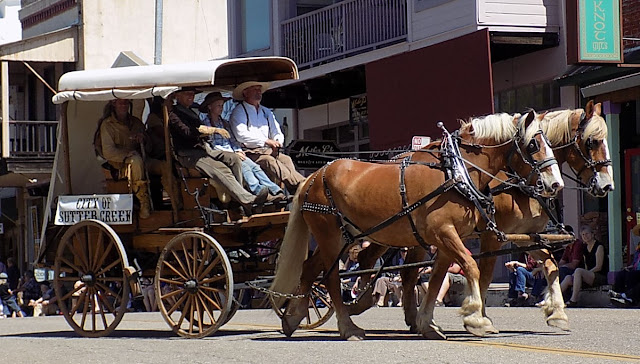 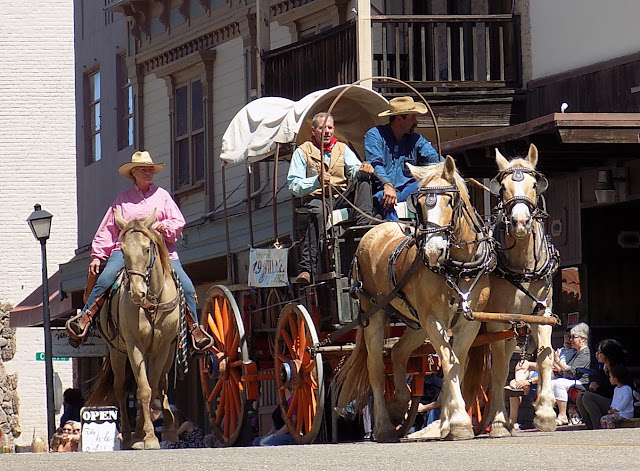 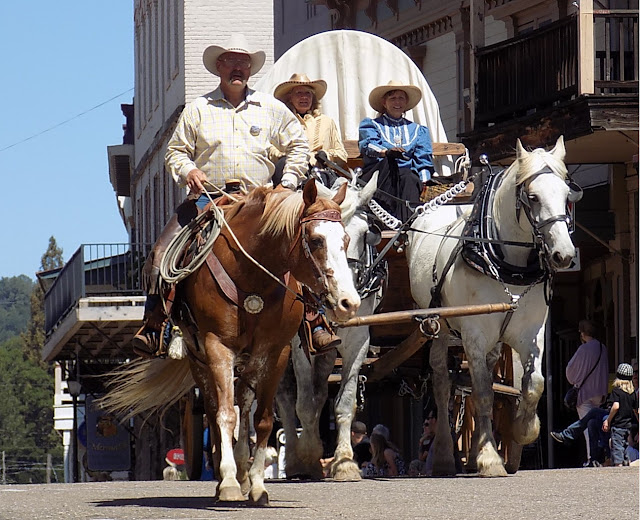 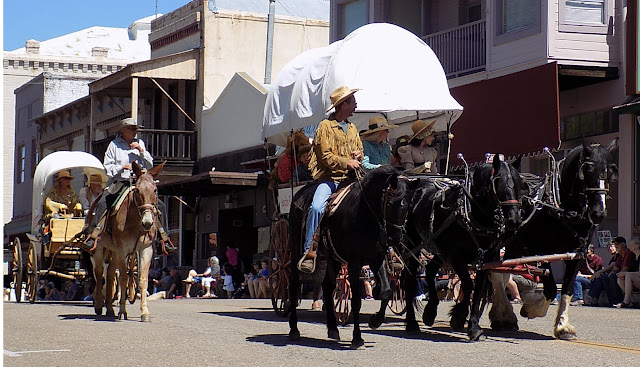 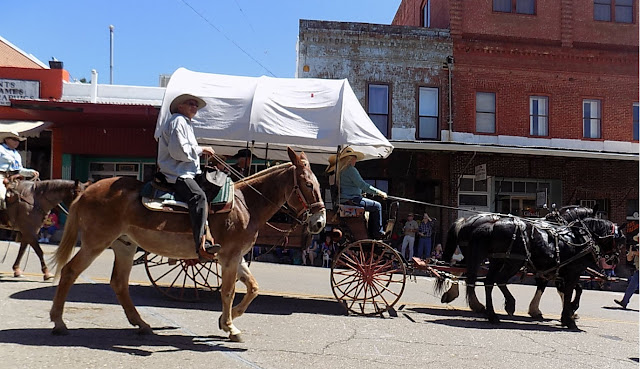 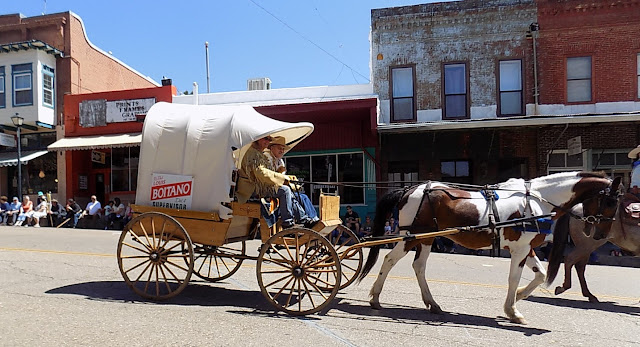 After the parade, the Wagon Train returned to their camp at historic Kennedy Mine near the iconic Kennedy Tailing Wheels and the head frame of one the deepest gold mines in the world. It was then that my wife and I got a chance to talk with Dennis and Antonia about their wagon which come to find out has a history all its own.

In the case of Dennis and Antonia's wagon, it originated from the Ponderosa Ranch. Yes, when the famed Bonanza television set finally closed its doors as a tourist attraction in 2004, they were able to acquire one of the wagons.

On the show, the ranch was always said to be about a "two-hour ride" on horseback from Virginia City. For the record, the Ponderosa's Virginia City was 40 miles from the real Virginia City. 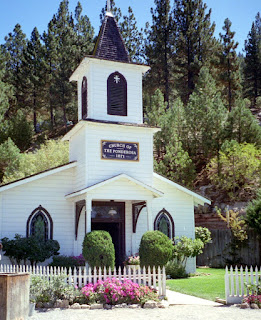 The Ponderosa Ranch had activities, concessions and souvenirs, a haunted house, and panning for gold. Its amusements were based on Western movies and television shows. Believe it or not, people were actually getting married at the Church on the Ponderosa Ranch.

And yes, I remember the long rows of sheds and small barns filled with antiques, vintage tack, wagons, buggies, and their parts, and more of everything Old West to use as props for the long running series.

One of the things that I remember most, besides the "Hoss Burgers," was a Conestoga Wagon on the site. It was believed abandoned by the Donner Party in 1846. It was recovered in the 1930s when Donner Lake was low.

As for Dennis and Antonia's wagon, I don't knew how much effort was needed to restore their wagon because the folks who ran the Ponderosa Ranch as a tourist attraction did a great job of making sure all of their equipment was looked after pretty well. Many of the wagons, buggies, carts, and so on were kept in sheds, in small barns, or simply under cover as can be seen in this picture of the Ponderosa Ranch barn. 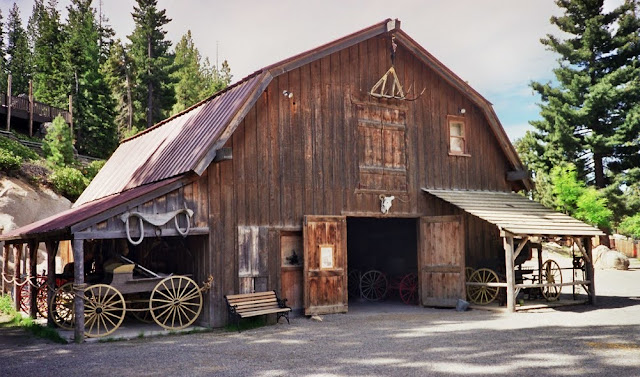 As you can see, there are a number of buggies as well as spare wheels undercover.  That was a lot of what took place at the ranch to protect thing from the weather.

Even though that may have been the case, Dennis and Antonia sent their wagon to Marcus Wagon Works in Marysville. It's said that if you want quality wagon workmanship when building or refurbishing wagons, then Marcus Wagon Works is who you contact.
Painted, varnished, and outfitted with well oiled harness leather for their team of Percheron/Welch Cob cross horses, their wagon is certainly a thing of beauty.

I overheard Dennis telling others that he has learned a great deal from their group of covered wagon enthusiasts. And frankly, I can see how that is a good thing. From tips on how to be a better teamster, to being able to maneuver their wagon better, to learning more about the history behind what they're doing, I can appreciate how one learns from others just as there will be those who'll learn from Dennis.

I tip my hat to Dennis and Antonia, as well as other folks like them. Their passion for covered wagons and the Old West is wonderful to see. Through their efforts, and that of others, all folks with the same dedication to and passion for the Old West, I know we will keep interest in our Old West heritage very much alive. And frankly my friends, that is something we need to do more of.

I'm part of that generation where us kids were brought up on '50s and '60s Westerns on television and at the movies, we liked how we beat our enemies during World War II, and we liked the idea that our government worked for us and not the other way around. And yes, more of us were rural than urban and we were brought up knowing how to do things for ourselves.

Being interested in our family and our history, we learned a great deal about the strengths of others, their moral fabric, their abilities to survive and make it through tough times. We learned about self-reliance, having an independent nature, having a "never-say-die damn-the-torpedoes" attitude, maintaining a belief in doing right and not giving in to evil, all the while understanding that it is good to help out one's neighbor while not asking for anything in return.

These were some of the things that most of us learned in one way or another, and this is what young people today can get out of an interest in Old West history. Learning about true hardship and peril can give youngsters more of a true understanding of those who came before us.

Right now, many young Americans have very little real appreciation or knowledge regarding what their great-great-grandparents went through. I think this is mainly due to their being unaware of the true nature of what they faced back in the day.

I see parades like this as a means to inspire and motivate young people to want to ask questions and learn how really tough, really hardy, and really determined people were and can be when seeking a better life. It might teach them that they too are cut from the same cloth, even if society that has programmed them to suppress those positive attributes.

And yes, that's just the way I see it!
Tom Correa