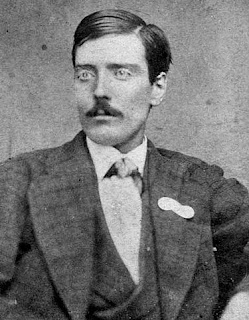 My article The Killing of Ed Masterson, 1878 was a big hit. Now a few of you have written asking for more information on Ed Masterson's shootout with Bob Shaw.

From what I can determine, Ed Masterson was without a doubt a fearless lawman. He was seen by people who knew him as an honorable and decent man, as well as an important man in his community.

Below is are newspaper accounts of the Dodge City gunfight between Ed Masterson and Bob Shaw.


Last Monday afternoon one of those little episodes which serve to vary the monotony of frontier existence occurred at the Lone Star dance hall, during which four men came out some the worse for wear; but none, with one exception, being seriously hurt.

Bob Shaw, the man who started the amusement, accused Texas Dick alias Moore of having robbed him of forty dollars, and when the two met in the Lone Star the ball was opened.

Somebody, foreseeing possible trouble, and probable gore, started out in search of Assistant City Marshal Ed. Masterson, and finding him hurried the officer to the scene of the impending conflict.

When Masterson entered the door he descried Shaw by the bar with a huge pistol in his hand and a hogshead of blood in his eye, ready to relieve Texas Dick of his existence in this world and send him to those shades where troubles come not and six shooters are not known.

Not wishing to hurt Shaw, but anxious to quiet matters and quell the disturbance officer Masterson first ordered him to give up his gun. Shaw refused to deliver and told Masterson to keep away from him, and after saying this he again proceeded to try to kill Texas Dick. Officer Masterson then gently tapped the belligerent Shaw upon the back of the head with the butt of his shooting iron, merely to convince him of the vanities of this frail world and to teach him that all isn't lovely even when the goose does hang antitudilum. The aforesaid reminder upon the back of the head, however failed to have the desired effect, and instead of dropping, as any man of fine sensibilities would have done, Shaw turned his battery upon the officer and let him have it in the right breast, the ball striking a rib and passing around came out under the right shoulder blade, paralyzing his right arm so that it was useless, so far as handling a pistol was concerned. Masterson fell but grasping his pistol in his left had he returned the fire giving it to Shaw in the left arm and the left leg, rendering him hors du combat.

During the melee Texas Dick was shot in the right groin, making a painful and dangerous though not necessarily a fatal wound, while Frank Buskirk who, impelled by a curiosity he could not control, was looking in at the door upon the matinee, received a reminiscence in the left arm, which had the effect of starting him out to hunt a surgeon. Nobody was killed, but for a time it looked as though the undertaker and the coroner would have something to do. The nerve and pluck displayed by officer Masterson reflects credit both upon himself and the city, which has reason to congratulate itself upon the fact that it has a guardian who shirks no responsibility and who hesitates not to place himself in danger when duty requires.

City Marshal Edward Masterson receives the congratulations of his many friends without a show of exhalation. Notwithstanding the fact that considerable feeling was manifested against the removal of Mr. Deger, no one accuses Mr. Masterson of seeking the position. In fact he preferred to retain his old position as Assistant, which gave him the same salary and engendered less responsibilities. As an officer his reputation is made, and it is a good one.

City Marshal Masterson contemplates organizing a tramp brigade for the purpose of clearing the streets and alleys of the filth and rubbish that has been accumulating for a year or so. There are about thirty tramps now sojourning among us, all of whom have no visible means of support and are liable to arrest under the vagrant act.

At ten o'clock last night. City Marshal Edward Masterson, discovered that a cowboy who was working for Obum of Kansas City, named Jack Wagner, was carrying a six-shooter contrary to the City Ordinance. Wagner was at the time under the influence of liquor, but quietly gave up the pistol. The Marshal gave it to some of Wagner's friends for safe keeping and stepped out into the street. No sooner had he done so than Wagner ran out after him pulling another pistol, which the Marshal had not observed. The Marshal saw him coming and turned upon Wagner and grabbed hold of him.

Marshal Masterson will be buried in the Military Cemetery, at Fort Dodge.

Died. In this city, on Tuesday, April 9th, in the 26th year of his age, Edward J. Masterson, City Marshal.

He died in the service he performed so well, and has added one other to the list of those who, living, were so many representatives, each of his day and generation, but who dead, belong to all time, and whose voices ring down the ages in solemn protest against the reign of violence and blood.

For me, it sounds as though a lot took place in a very short span of time. And luckily, Ed Masterson was not killed.