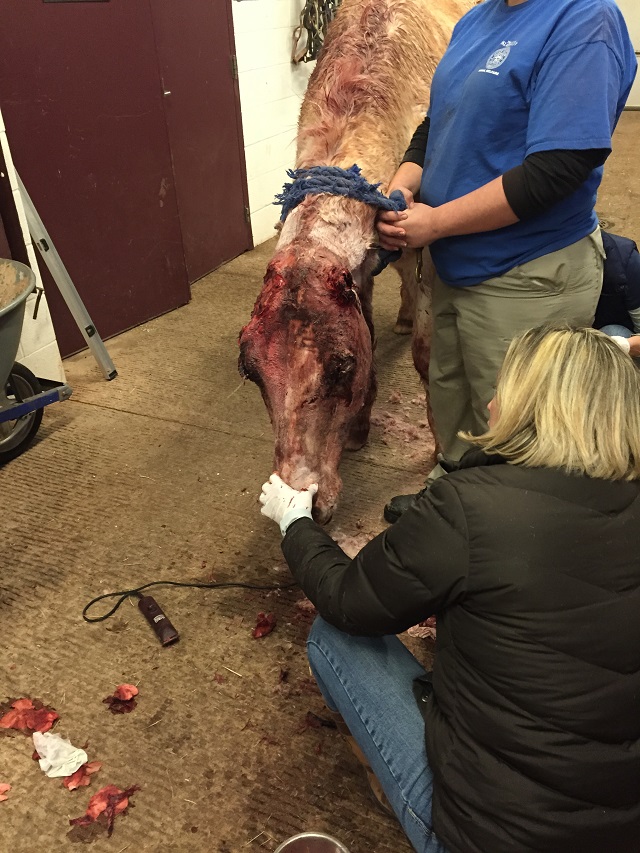 I've seen the results of horses being attacked, stabbed, and even shot by people who we will never find. And yes, I've heard of owners not feeding their horses to save money. I've seen horses starved for one no good reason or another. I've heard of owners not tending to horses with wounds that would be very easy for anyone to attend to -- but left to fester and become infected.

In my lifetime around horses, I've known "know-it-alls" who should have been jailed for the way they've treated their horses, and dogs. I've seen so-called "trainers" who have used training methods that were only sadistic and cruel in nature.

But as for horses being in trouble and simply left to die by an owner, with the owner who could have rescued his own horse from the terror of being attacked by vicious animals, this is the absolute worse case of horse cruelty on a single horse that I have ever heard of in my entire lifetime.

And frankly, the horror, the shear terror that that horse went through, no one, neither man or beast, should have gone through. To be trapped starving in tangled in barb-wire fencing and left there to be attacked, that my friends is as horrible a fate as I can think of.

Yes, that is the story of a horse which became known as Rudy.

It is a story that I wan't to report on over a year ago but couldn't because it would have not been the story it is now -- over a year later.  And as with the picture in beginning of this article, please understand that Rudy's pictures are graphic and heart wrenching.

Rudy's story started on January 2nd, 2015, when a nearly dead horse had been rescued in Oklahoma. The news story spoke to the fact that the Oklahoma City Animal Control said it's pursuing charges against a man who called in to say that he had a dead animal for them to come out and pick up.

That "animal" was a horse, but it wasn't dead. To say the horse on the 7000 St. Bernard Street was "badly injured" was an understatement.

Animal control said the horse had become entangled in barbed wire fencing. They said the horse was missing both ears, both eye lids, he has an extensive skull fracture, and multiple lacerations all over his body.

"They didn't even go out there to check on him to see if he was alive. They didn't call a vet to come out and help or anything like that, and I think that's the most distressing thing," said one of Rudy's rescuers.

Oklahoma City Animal Control Supervisor Trace Lyons said there are also clear signs the horse had been attacked repeatedly by other animals. “I don't know what his motive was for saying it was dead, either he was just guessing because it was just laying in the mud in the cold and rain, but when we arrived we realized the horse was still alive.”

Oklahoma City Animal Control is currently pursuing charges against the man who called them.

Since horse people who come to my website will want to know what was done to save this horse, especially in such a sever case of cruelty as this is, I really believe you will want to read the updates provided by Blaze's Tribute Equine Rescue Founder Natalee Cross.

So in Part Two of this story, I have included the notes provided by the great folks at Blaze's Tribute Equine Rescue who have cared for Rudy.