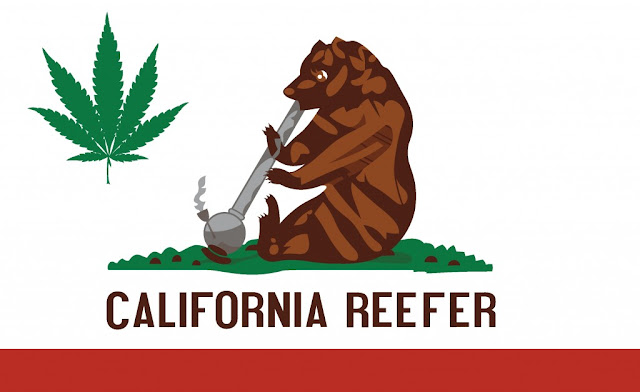 I've been asked if I thought legalized pot would be treated differently than how other legal products are, in so far as being taxed and over-regulated by the State? I was asked if I thought legalization would end the criminal element associated with pot the same way it was with liquor after Prohibition ended in the 1930s? And yes, I was also asked if the criminal element stopped with the end of Prohibition in the 1930s?


So let's take first things first, marijauna legalization in California means the State of California will in essence become a partner in the drug trade with pot growers. Some say this could help keep pot off the black market. But will making pot legal really do that?

The black market is the system through which products of all sorts are bought and sold illegally. I read where there is a $10 trillion economy of all the world’s black markets. In fact, the world's black markets would be considered the second-largest in the world, second to the United States, if it were legal.

While those things are illegal, there are legal products such as cigarettes, liquor, wine, guns, prescription drugs, bodybuilding supplements, cosmetics, computers and software, all sorts of copyrighted materials, Tide detergent, sperm, crude oil, and even water, that is being sold on the black market. It's true, even water -- especially here in California during the drought that we've been experiencing the last few years.

Why do these shadow markets thrive when it comes to selling legal products? Most experts believe it's because of organized crime, high taxes, and some sort of restriction placed on the items.

In contrast to illegal items like say rhino horn and hand grenades which are more expensive because they are rare, dangerous, and smuggled goods, illegally acquired legal goods can be either cheaper or more expensive than legal market prices. Yes, some legal products on the black market can be either or. This is because they are usually stolen goods, un-taxed, or over-regulated goods that are found elsewhere but not in other places.

California's black market for guns falls into the category of over-regulated goods that are fond across state lines but not here. Subsequently, they are more expensive and there are those who are willing to break the law to buy guns that are legal product in the United States -- just not this part of the United States.

The State of California restricts the personal ownership of firearms, either altogether or by classification by caliber or type. The black market supplies the demands for firearms that can't be obtained legally. Of course, there are those who buy guns illigally, what is basically a black market purchase, because the firearms they want may only be obtained legally after paying fees which they do not want to pay.

According to the BATF, those guns are assembled in homes and shops, and are sold without serial numbers or other identifying features. Thus, they are known as "ghost guns."

Federal officials say hundreds of AR-15s and silencers have been seized in a series of ongoing undercover operations in 2015. But let's be honest here, even they know that they are only scratching the surface of what's out there.

So why the black market sales of AR-15s when they are still legal to own in some configurations? Well, though it is legal to own an AR-15 with the California "bullet button" magazine release, it is just as easy to purchase and assemble all the parts needed for an AR-15 rifle and get one without the button restriction. Of course it is a felony to sell or trade a weapon without a serial numbers anywhere. But here in California, the state feeds the black market by making it a felony to own an AR-15 without the California "bullet button" magazine release.

According to one report on the black market sales of the AR-15 in California, it stated, "The AR-15, which is a semi-automatic rifle, the civilian version of the M-16 rifle, already was one of the most popular weapons in the country. Their being restricted from the marketplace has made them even more popular on the black market."

San Francisco's ultra-Liberal Steyer has became the largest individual political contributor in the United States according to Politico. Steyer has successfully placed Proposition 56 on the November 2016 California ballot. It would require an additional $2-per-pack cigarette tax on cigarettes sales in California.

California Proposition 56, Tobacco Tax Increase will be on the November 8th, 2016, ballot in California as a combined initiated constitutional amendment and state statute. A "yes" vote will increase the cigarette tax by $2-per-pack with equivalent increases on other tobacco products and electronic cigarettes.
Ultra-Liberal Steyer is said to be confident that Prop 56 will pass because he knows most California voters are not smokers. But, there are consequences to over-taxation, and people are fooling themselves if they don't understand the impact of increasing cigarette taxes.

Fact is, California presently has a .87 cents-per-pack cigarette tax. When the tax is increased to $2.87-per-pack, because of cheaper cigarettes on the black market, the over-taxation of cigarettes will make California the smuggling capital of America.

So no, since we know legal products are on the black market and have a criminal element attached to them. The criminal element being those dealing in stolen-goods, those transporting, and of course those distributing un-taxed or restricted items. So what makes people think pot legalization is not going to have the same criminal element that's already associated with pot?

Why are proponents of the legalization of pot always comparing it to Prohibition in the 1930s, and talking about how when Prohibition ended so did the criminal element associated with Prohibition? Especially when it didn't?

People forget that when Prohibition ended, the criminals element was still present and in fact were still dealing in stolen-goods, as well as transporting and distributing cheap booze on the black market. And yes, many like the Kennedys in Massachusetts went legit and later gained an appearence of respectibilty.

We should remember that the only thing that changed for criminals after Prohibition was that they didn't have to concern themselves with the manufacturing of the booze. But let's face the fact also that the successful bootleggers like the Kennedys in Massachusetts didn't make the booze.

Back during Prohibition, the people making the big money were the bootleggers who distributed the booze.  And yes, they kept making money after it was legal -- just not as much as they did simply because Uncle Sam wanted his cut through taxation. People should understand, just as it is today, the illegal business of transporting, yes smuggling, alcoholic beverages is usually done because they are trying to circumvent taxation and/or laws.

If pot supporters really take a long look at the end of Prohibition in the 1930s, a time they cite a great deal, they will find they are wrong. No, the criminal element associated with illegal booze did not go away. In fact, it just went farther under-ground to deal on the black market. Where do people think the

If pot growers are basing their idea of a new world opening up to them when it becomes legal, they really should think again. Besides, what makes pot growers and their supporters think that the illegal distribution of pot will change once the State of California makes pot more expensive with high taxation and regulations? What makes them think that some pot growers, those who refuse to pay the fees and the taxes, would simply go farther under-ground and deal on the black market as they do today?

And really, what makes pot growers think they will have the same profits after it becomes legal and the State of California starts taking its cut through taxation?

One of the things that I can see taking place is that plant thieves, those who steal the marijuana, they will be able to sell the stolen trees easier and not have the problems that they have selling them right now. And frankly, I believe that a large percentage of plants grown legally will still end up on the black market just the same as so many other legal products do, simply because there are those who refuse to give the State of California their cut through taxation and will find a way around it.

The state of California will allow growers to get away with anything as long as they get their share. Remember, they are already doing this by passing laws that make it OK to have commercial grows in places like Calaveras County. The state is doing so passively by not supporting our Sheriff's Department in any way.

To my way of thinking, this might expand the war on pot instead of end it for illegal pot farms. And as for the legal pot farms, many say they want very little regulation. But frankly, they don't know what regulation is until they get in bed with the State of California.

My readers wrote to ask questions pertaining to the black market trade and legal products being sold on the black market. I was asked about legal products taxed and over-regulated by the State of California. I was asked if legalization would end the criminal element which associated with pot and the problems that those criminal bring to our communities? Yes, we are seeing an increase in criminal activity since the County Supervisors opened the doors to commercial pot growing.?

And I was also asked if the criminal element would stop now as it supposedly stopped for the illegal sales of liquor at the end of Prohibition in the 1930s. If pot becomes legal, of course it will be taxed. Will it still be sold on the black market after it becomes legal? Of course it will, just as many other legal products are today.

As for revenues to help counties and the question as to whether or not the State of California get the lion's share of the taxes and give the counties very little? Of course it will. that's been the history of Califonria government. And by the way, California forbids counties from imposing levies. So if pot becomes legal, will our Sheriff remain overworked without support from the State the same as what's taking place right now? Yes.

So really, what will change as far as for the legalization of pot? Legalization is when pot growers will truly find out what over-taxation and over-regulation is all about. The growers may find out, sooner than later, why legal businesses, manufacturers and tech firms, those who abide by all of the rules and try to exist within the law, are actually leaving California faster than they are coming in.