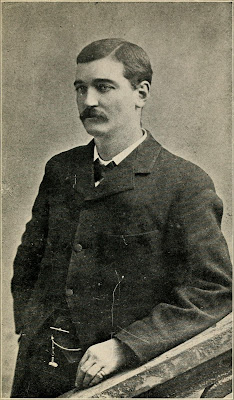 What would become known as the Sweetwater Shootout took place on the night of January 24th, 1876, in the Lady Gay Saloon in Sweetwater, Texas. The town which is now known as the town of Mobeetie. And yes, it was over a dance hall gal by the name of Mollie Brennan.

As with most gunfights, the Sweetwater Shootout was pretty quick. And like most gunfights, it was a down and dirty affair where only three shots were fired at fairly close range.

Of course, that is fairly common, very normal, for most gunfights even today. And while that's not saying that rolling gunfights didn't happen, such as the Battle at the Plaza in Dodge City where parties actually ran out of ammo, the Sweetwater Shootout was like most in that it took no time at all.

It involved a soldier known as Melvin A. King a woman named Mollie Brennan, and of course the now famous Bat Masterson. And though he really would become a legend in his own time, at that point he was just starting to build his reputation.

Before going on to what took place, let's address the drunken hothead also known as Sergeant King. Why King is called "Sergeant" by some is a question that I can't find a satisfactory answer for. That's especially true considering he was actually only a Corporal and was not a Sergeant. Records show that cavalry soldier Corporal Melvin A. King was part of the then-4th Cavalry, Company H, stationed at Fort Elliot, Texas.

While I have not been able to find a plausible reason for King being called a "Sergeant" instead of his actual rank, one speculation for the discrepancy about his rank is that when the story was being passed around someone simply mistakenly started calling him "Sergeant King' and it stuck. But frankly, I really don't think anyone really knows for certain why he wasn't called by his actual rank.

And as for his name, Melvin A. King, well that appears bogus as well. Granted that it wasn't out of the ordinary for people to change their names back then, especially if they had a sorted past, maybe running from the law, or simply wanting a fresh start.

In the Old West, and even into the early-20th Century, there were many with checkered pasts who joined the military under false names. While I don't know if this was the situation with Melvin A. King or not, his real name was actually Anthony Cook.

As for Mollie Brennan, in 1872, she was in Ellsworth, Kansas, where she married a saloon keeper named Joe Brennan. By 1873, she apparently became involved with her husband's brother. And when he fled town after a shooting incident where the law was involved, she followed him to Texas. She arrived in Sweetwater, and soon enough she worked as a dance hall girl at Charlie Norton's establishment.

It's said that Bat and Mollie were talking when Corporal King, still drunk and angry as all get out, knocked on the door. Bat got up to answer it, and at that moment King burst in the door with a revolver in his hand.

King didn't wait or say a word, he simply cut loose with two shots. One struck Bat in the lower abdomen, the other round struck Mollie killing her instantly.

It's said a moment after Bat was hit with the first shot, Mollie threw herself between the men. Whether she did it to protect Bat or simply get out of the way, no one really knows. We do know that different sources say she either threw herself or jumped between King and Masterson in an effort to save Bat's life.

Of course there are some who say since Mollie Brennan was a dance hall girl, a gal rumored to be a prostitute, and known to be King's "girlfriend," that she may have thought that she could stop King from finishing off Masterson and simply got in the way. Either way, accident or not, King's second shot killed her.

So King's first bullet struck Bat in the groin actually knocked him to the floor. Then when he pulled off another round to finish Masterson off, King instead shoots Mollie.

Because that second round hit Mollie, Bat has the time to collect himself and draw his own gun. He fires a single shot that strikes King in the heart. Yes, Bat ends up killing King with a single shot while wounded on the floor. And friends, that's quite a feat considering he was shot, bleeding, and in massive pain. 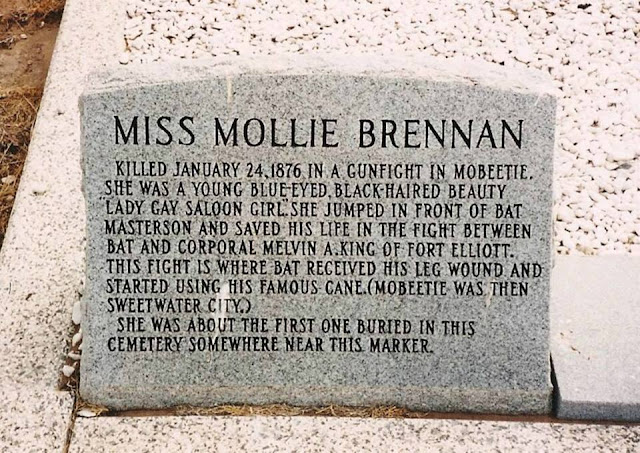 That was Bat Masterson's first shootout. He would go on to use a firearm five more times in his life before settling down as a New York sports writer. But there is something else about the Sweetwater Shootout, something that goes to the myth and legend of Bat Masterson.

Many folks believe that it was because of the Sweetwater Shootout that Bat Masterson started to be called "Bat." They say it was as a result of the wound he sustained that night. Yes, some folks believe that that's where his nickname "Bat" came from.

While it is true that Bat Masterson's wound was very sever and needed the assistance of a cane while recuperating and even later, some spread the myth that he used used his cane as a club to "bat" outlaws and other lawbreakers over the head. Fact is, he did not use his cane as a club to tame the West.

Of course the problem with the notion that that is why Bat Masterson was called "Bat," is that he was called by the nickname Bat long before he ever arrived in Sweetwater or ever met Corporal King and Mollie Brennan.