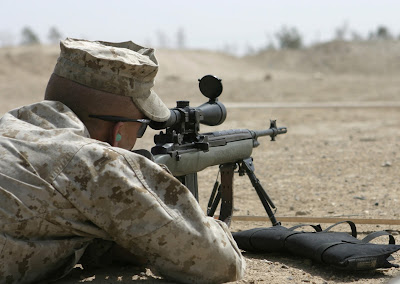 There are several notable differences between the basic M14 and the DMR:
The most common scope used on the USMC DMR are TS-30.xx series Leupold Mark 4 day scopes, AN/PVS-10 or AN/PVS-17 night vision scopes, and Unert M40 10× fixed power scopes.
For the Marine Corps, a grunt operating as the Designated Marksman (DM) using a DMR is an integral part of Squad Tactics. The Marine DM's role fills the gap between a regular infantryman and a sniper typically being deployed at ranges of 270–550 yards and DMRs have been developed with this middle ground in mind. 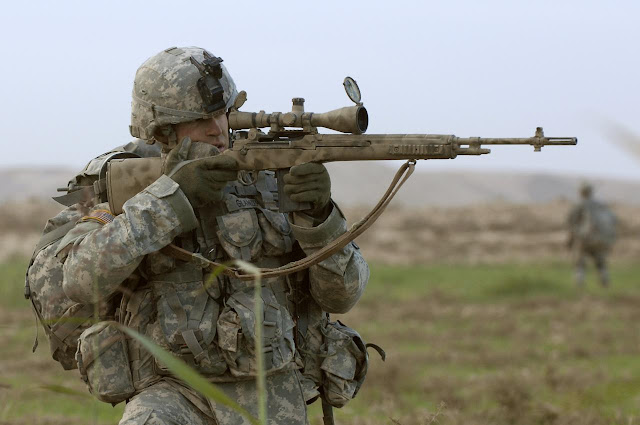 These rifles have to be effective, in terms of accuracy and terminal ballistics, at ranges exceeding those of ordinary assault rifles and battle rifles typically 270 yards or less, and up to 550 yards respectively, but do not require the extended range of a dedicated sniper rifle which is typically employed for targets at ranges from 550–2,200 yards. 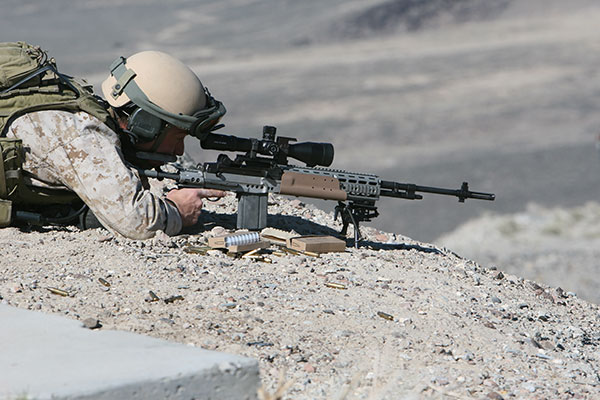 The "basic" EMR, without telescopic sight, magazine, sling, basic issue items, cleaning gear, suppressor and bipod, weighs 13 pounds or less. The EMR is primarily used by a Designated Marksman, to provide precision fire for units that do not rate a Scout Sniper.

Back in 2003, the US Army issued a market survey for a 7.62 mm Semi-Automatic Sniper System (SASS). Smith Enterprise responded to the market survey with an M14 rifle variant that was very impressive. They made the case why the Army should adopt the M14 Rifle and not an M16 platform as with the M110 for its sniper needs. 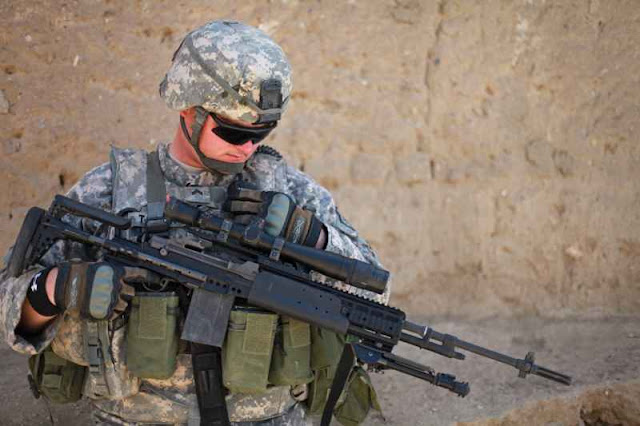 The Mk 14 Enhanced Battle Rifle (EBR) is a variant of the M14. It was built for use with units of the United States Special Operations Command.

The EBR is being made with the intention of carrying out both designated marksman and CQB roles in combat. The weapon takes the standard M14 action and replaces the standard 22.0" barrel with an 18.0" barrel.

The barreled action is then bolted into a telescoping chassis stock system, with a pistol grip, a different front sight, Harris bipod, four picatinny accessory rails (which surround the barrel), and a more effective flash hider in place of the standard lugged USGI flash suppressor. A paddle-type bolt stop similar to that of the M4 carbine is used on the rifle.

A Kydex hand guard and M68 CCO are also added as standard external accessories, though they are almost always replaced with a vertical fore-grip and magnifying scope for better handling and for use in a designated marksman role.

A Wind Talker suppressor can be mounted on the DC Vortex flash hider, though the U.S. military did not adopt one to active service.

No, the M14 EBR isn't anything like the M14 that I was trained with in Boot Camp or carried overseas. But, it is certainly its great-grandson on steroids with a 7.62 attitude. And yes, this is very close to the sort of M14 that my father-in-law Nickel Jim would build -- but that's a story for another day.

Since the start of the conflicts in Afghanistan and Iraq, many M14s have been employed as Designated Marksman and Semi-Auto Sniper Rifles. These are original production M14s with common very easy modifications including scopes, fiberglass stocks, and other accessories.

In 2009, a study conducted by the U.S. Army claimed that more than half of the all enemy engagements in Afghanistan occurred from beyond 300 meters (330 yards). The study claimed that America’s 5.56mm NATO service rifles, the M16 and the M4, are ineffective at these ranges.

Since they had a report that told them what troops already knew, that report prompted the reissue of thousands of M14s to our troops. And with the reintroduction of the M14, our military understood that an M14 platform was needed to keep our troops safe and able to accomplish their mission better than before.

So now, can you see why for my money the M14 rifle is greatest battle rifle ever created? From the original design being as functionally perfect as it gets, the M14 has shown to be a platform in which to improve on.

And yes, that's just way I see it.