The Wives of Virgil, Wyatt, and Morgan Earp

After my article on Nellie Cashman, I have decided to do a short series about the women who lived in the Old West. 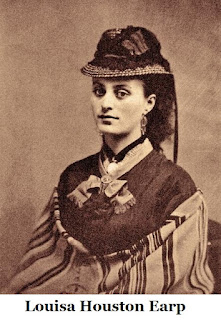 Louisa Houston Earp, who was married to Morgan Earp in Montana sometime between 1871 and 1877, was born on January 24th, 1855, in Wisconsin and was supposedly the granddaughter of Sam Houston of Texas fame. Before Lou, as she was known, met Morgan, she and her sister Kate were both Harvey girls.

Fred Harvey opened a chain of hotels and restaurants along the railroad lines, which became known as Harvey Houses. In order to become a "Harvey Girl," the women had to have at least an 8th-grade education, good moral character, good manners, and be neat as well as articulate. Not only did Louisa have all of those qualities about her, but she was also a very pretty woman who didn't hurt either.

Just as always, Hollywood rarely gets anything correct. In the movie Tombstone, Louisa Earp went to Morgan's side in Hatches saloon after he was shot and killed. In reality, Louisa was staying with Morgan Earp's mother and father in Colton, California, at the time Morgan was killed. He felt that she would be safer with his folks than being in Tombstone.

After Morgan's death, Louisa stayed in Southern California, where in 1885, she re-married a longshoreman in Long Beach by the name of Gustav Peters. This marriage only lasted about four years because Louisa died on June 12th, 1894, of Nephritis and Diarrhea.

Nephritis is a medical term for inflamed kidneys, and if not treated, it leads to complete kidney failure. It was said about Lou by people who knew her that Morgan was the true love of her life and that she actually died of a broken heart -- if one can believe that. 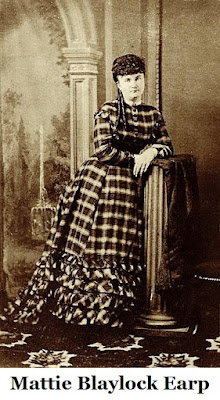 Celia Ann "Mattie" Blaylock, Wyatt Earp's common-law wife, was born in January of 1850 in Monroe Township, Johnson County, Iowa, not far from Fairfax, Iowa. Being raised on her very strict parents' farm, Celia or Celie, as she was known by her nick name wanted nothing to do with farm life, and with her younger sister, Sarah ran away in 1868.

It's not known how the two survived during that time, but both were excellent seamstresses and could have made their living at that trade. At some point within a year, Sarah decided that it was too hard trying to survive on her own and went home to her parents.

It was sometime after her sister left that Celia chose the alias of "Mattie." This was most likely to conceal her real name and identity.

The first known record of Mattie was of a picture taken in Fort Scott in 1871, and court records show she had adopted prostitution as her profession in 1872. Mattie met Wyatt Earp in Fort Scott and again later in Dodge City somewhere between 1871 and 1873.

During Wyatt and Mattie's early time together, she continued plying her trade as a prostitute. In the 1878 United States Census, she was listed as Wyatt's wife but no record of a legal marriage between the two ever existed.

Mattie became afflicted with severe headaches, which today would be known as migraines. And by the time she and Wyatt arrived in Tombstone, Mattie was addicted to Laudanum, which was a very strong opiate pain killer of that time period.

Following the murder of Morgan Earp in March of 1882, Wyatt, along with his youngest brother Warren as well as other posse members, began their vendetta ride searching out Morgan's killers. Mattie left Tombstone with the other Earp family members and headed to Colton, California, to the home of their parents.

Mattie waited to hear from Wyatt, but she never did. Basically, Wyatt had abandoned her with his folks, and after the vendetta ride ended, he headed into New Mexico and on to Colorado while all the time planning to head up to San Francisco to be with Josephine Marcus.

Mattie left Colton and went to Pinal City, Arizona, where she had planned once again to ply her trade of prostitution, but when she arrived, the silver boom town had mostly played out, and the bulk of the population had moved on, making it hard for her to make a living.

Mattie died of a lethal dose of Laudanum mixed with alcohol on July 3rd, 1888. Her death was ruled a suicide, but it is possible that it was an accidental overdose because no suicide note was found. If Mattie would have wanted Wyatt to feel guilty for her death like the movie Tombstone presented, she would have defiantly left a suicide note. 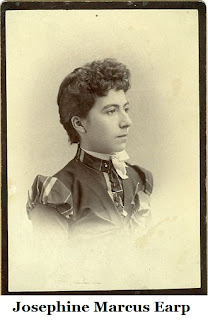 Josephine Sara Marcus, Wyatt Earp's last common-law wife, was born in 1860 in New York, but the family moved shortly afterward to San Francisco, California, in 1868. Josephine attended dance school somewhere between the ages of 7 or 8 and decided to run away from home around the age of 14.

Records show that she may have reached Prescott, Arizona Territory, as early as 1874 as well as Tip Top, Arizona Territory, that same year under the name of Sadie Mansfield, working as a prostitute in the area from 1874 to 1876. She became ill and returned home to San Francisco, possibly in 1876.

Josephine's life is very sketchy between the years of 1874 to 1880, but the records of Tombstone, later on, had also shown the name of Sadie Mansfield, and the two were very similar in many ways, making it a high probability that Sadie and Josephine were one and the same.

Josie, as she was known, joined the Pauline Markham Theater Company around the age of 19 in 1879. And while in the Arizona Territory, she fell in love with Johnnie Behan, who was the Cochise County Sheriff. He resided in Tombstone.

After the gunfight at the O.K. Corral, Josie returned to San Francisco in 1882, where she was met by Wyatt in the fall of that same year. Wyatt and Josie stayed together until Wyatt's death in 1929. They were together for 46 years.

Once again, Hollywood gets it wrong in the movie Tombstone. In the movie, Josie came to Tombstone with an entertainment troupe and put on a show at the Birdcage Theater. This is not possible because the Birdcage Theater did not open until December 26th, 1881, two months after the gunfight at the OK Corral had taken place. 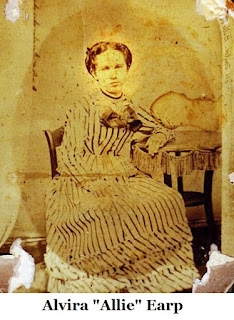 Alvira "Allie" Packingham Sullivan Earp, or Allie as she was known, was born to John and Mary Louise Sullivan on January 1st, 1849, in Florence, Nebraska Territory, which is now part of Omaha. She was the middle child of nine children.

The Sullivan family witnessed the Mormon Migration while living in Florence at the same time Brigham Young was there.

The family moved to Omaha just before Allie's father went off to fight in the Civil War in 1861, and shortly after that, her mother died. Allie's father, John Sullivan, could not be reached, so Allie and her siblings were divided up among various families in Omaha. Allie lived with the McGath family, where she was treated as nothing more than an indentured servant, so she ran away living with various other families in the area.

In 1873, Allie was working as a waitress in Council Bluffs, Iowa, where she met Virgil Earp. From there, in 1879, the couple traveled to Prescott, Arizona Territory, where Virgil was appointed Deputy United States Marshal on November 27th, 1879. And after only one month, they went to Tombstone.

In retaliation for the O.K. Corral shootout, Virgil was badly wounded on December 28th, 1882, losing the use of his left arm with Allie staying by his side almost constantly. After Morgan Earp was murdered by an ambush on March 18th, 1882, Allie, along with the rest of the Earp family, escorted Morgan's body, departing Tucson on March 20th, only two days after Morgan's death, to the home of the Earp seniors in Colton, California.

Allie was with Virgil as he became a peace officer in Colton and up until the time he became the city marshal in Gold Field, Nevada, where he contracted phenomena and died in 1905. Allie Passed away on her birthday, January 1st, 1947, at the ripe old age of 98 years.

In this day and age, we can't even imagine the hardships of the women who did whatever it took just to survive back then. Make no mistake, the majority of western women during that time period were a hardy lot.