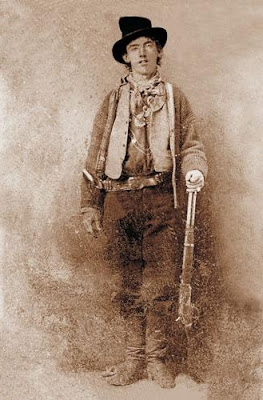 A letter from a reader asks, "Is the myth about Billy the Kid killing 21 men true or not?" My reader also wants to know when and where he was born because he's read a couple of different versions.

Legends say he killed one man for each of year of his life. But before we get into that, let's take on when and where Henry McCarty, also known as William H. Bonney, also known as "Billy the Kid," was born.

From what I've read on him, people can guess all they want but no one has proof of when or where he was born. That's the bottom line on that.

The Authentic Life of Billy, the Kid is a biography and supposed first-hand account written by Pat Garrett with the assistance of ghostwriter Marshall Ashmun "Ash" Upson. In that book, Garrett and Upson give the date of the Kid's birth as November 23th, 1859, and say it he was born in New York City.

The problem is that though this information has been accepted as the actual birth date and place for Billy the Kid, no one has any proof as to when or where he was born. That means there is no record of the month, the day or even the year. So then, if I'm right in that there is no record, then there are some of us who want to know where that date came from? And really, how did Garrett and Upson know since they did not really know the Kid?

I read where one writer stated that Marshall Ashmun "Ash" Upson made up the year and simply gave Billy the Kid the same birth date as his own which is November 23rd. I don't know if that's true or not, but it does appear pretty fishy since no one can find a record of birth anywhere for the Kid. And yes, Upson was born on November 23rd.

As for the year, from what I can see, it's all speculation as to whether or not he was born in 1859. As far as some are concerned, since some have found witnesses that say that the Kid was actually 17 years old during the Lincoln County War in early 1878, then that means the Kid may have been born in 1860 or 1861.

Fact is, from what I can see, his date of his birth remains a complete mystery. Yes, the same as with whether he was born in New York or Indiana or what have you. No one can say because there is no record of his date or place of birth, or where he was born.

Now as for how many men did he kill?

To my knowledge, the myth that says he killed 21 men is not true. As for the killings that we absolutely know are attributed to Billy the Kid, that number is 4.

Why only four? Well, we know that he killed Frank Cahill, Joe Grant, James W. Bell and Bob Olinger. We know that he and other gunmen were involved in the deaths of Billy Morton, Frank Baker, William McCloskey, William Brady, and George Hindman. But even though that's the case, we do not know if he was the actual shooter of those men or if it were one of the others whose bullet or bullets may have killed those men.

The problem here is no different than the myths of Doc Holliday, Wyatt Earp, Wild Bill Hickok, King Fisher, Ben Thompson, Luke Short and many others. A great number of legends have killings attributed to them that they simply did not do. In many cases, someone else did the killing and they were credited for it. In other cases, they themselves built up their legends by coming up with tall tales about people they fought and won, and the struggles that they overcame.

It is like not having witnesses to John Wesley Hardin's claim that he drew down on Wild Bill Hickok and that Hickok was fine with that. That was Hardin's claim from inside prison, and from what I can tell it's completely fabricated. If it isn't, then someone should produce a witness. The problem is that there wasn't any witnesses to what would have been a very big deal. It's just a fact, someone getting the best of the "legend" Wild Bill would have been huge news.

In the case of Billy the Kid, it is believed that Deputy James Carlyle was mistakenly shot and killed by his own posse went they thought he was Billy the Kid. It was shown later that the posse blamed the killing on the Kid out of convenience instead of owing up to a mistaken of friendly-fire. Any evidence that points to the Kid has been shown to be circumstantial evidence at best.

Billy the Kid has been blamed for killing Buckshot Roberts, but it was Charlie Bowdre who killed Roberts. The Kid was credited with killing Charlie Crawford, but his killer was Fernando Herrera who is said to have shot Crawford as he rode towards town to join Peppin's posse during the siege at McSween's house.

Billy the Kid gets credit for the killing of Robert Beckwith, but no one really knows who's bullet killed Beckwith. And as for killing Morris Bernsteinring, he was killed by Atanacio Martinez and not the Kid.

So while we can say that he participated in five shootings, it's a lot more accurate to credit Billy the Kid killing the four men that we absolutely know he killed. And that, well that's no where near 21.