The Californio -- The Caste System

A reader wrote to ask if I knew anything about the class or caste system in Old California among the Californio?

Well, this is some of what I was taught and since read about Old California. I know that Spain's first contact with California was in the 1530s when Cortez's men ventured to Baja California (Lower California). It wasn't until 1542 that Spaniards sailed north to Alta California (Upper California). That was when Juan Rodriguez Cabrillo's expedition landed in what is today Santa Barbara.

It is said that coastal winds and strong currents made the voyage north almost impossible. And because Spanish sea-captains failed to find safe harbors for their ships, Baja California became the northwest limit of Spanish colonization. It's also said that while they also converting native Indian tribes Catholics and instilling a Spanish way of life was important to the Spanish at the time, that their efforts to truly settle the area was really halfhearted at best. In fact, they claimed the area but really didn't do anything with it for more than 150 years.

After the Seven Years War, which was from 1756 to 1763, Spain decided to seriously attempt control of Alta California. Yes, it was more than 150 years later that Spain finally decides to truly colonize the area that the Spanish explorer Cabrillo claimed for the Spanish crown.

Their effort to colonize California was made through a combination of establishing Presidios which are military forts, and mission churches which were overseen by Franciscan fathers led by Junípero Serra.

In 1769, the first parties set north from Baja California, and the line of Spanish settlement along the coast was inaugurated when soldiers and priests established a Presidio and mission church at San Diego. By the end of the Spanish colonial period, California had three Presidios located at Santa Barbara, Monterey, and in San Francisco. During this time that established 21 missions.

In addition to the missions and the Presidios, small pueblos sprang up. In fact, in 1777 the pueblo at San Jose was created, and in 1781 a group of forty-four Spanish settlers known as "Los Pobladores" founded the pueblo called "El Pueblo de Nuestra Señora la Reina de los Ángeles de Porciúncula". In English that is translated to "The Town of Our Lady the Queen of the Angels of Porziuncola." Porziuncola meaning "Little portion of land". The river that was called the Porciuncula is today's Los Angeles River. Yes, the place we know as the city of Los Angeles.

The pueblos tried to attract settlers by offering land grants. Those pueblos were governed by an "Alcalde," who was a combination of a judge and a mayor. He was assisted by a council called the "Ayuntamiento" which was the elite there.

In the beginning, most "Californios" were of pure unmixed Spanish ancestry. In fact "Californios" are historical pure Castilian ancestry. Since the 15th century, through the Spanish colonization of the Americas, Castilians brought with them not only their language but also elements of their culture and traditions. Yes, this included a "caste system."

Castilians are actually inhabitants of a central region of Spain. Castilian is the source of the Spanish language. As for the term "Californio," it became watered down and was used to describe the mixed bag of people from Spain, Mexico, and even the United States. So no, it wasn't only the rich.


The first Spaniards in California were for the most part Castilians from central Spain. They were military personnel and Franciscan priests. As time went on Spanish California was populated by many of the soldiers who were once deployed to California from what is today Mexico. And according to mission marriage, baptism, and burial records, as well as Presidio troop rosters, several of the solders known as "leather-jackets" were described as being born in Spain. Those Spanish soldiers were in California because they were assigned as escorts, mission guards, and other active military duty assignments. Many simply stayed once their military obligations had ended.

It's said that the term "mestizo" was rarely if ever used in mission records, the more common terms being used were "indio", "europeo", "mulatto", "coyote", "castizo." And yes, these were caste terms. So yes, California had a caste system which was an extension of the caste system in Spain.

A caste system is a class structure that is determined by birth. It means that if your parents are poor, then you're going to be poor too. Of course if your parents are part of the wealthy and elite, then you too are destined to be rich and part of the elite. Very seldom does a person from lower classes makes it into the upper class. And even if one did, they may not be accepted at the higher level for a few generations.

This system is very foreign to Americans because we see all people as equal. All Americans have the opportunity to advance in life, and are really only limited by their own personal drive and ambitions. There are many many stories in American history of people who came from poor families who went on to achieve success.

During most of the Spanish colonial era in California and elsewhere, Spanish society had a small number of pure blood Spaniards at the top. This was the hierarchy of power and social status during most of the colonial period. Beneath them was the mixed race "peons" who were the unskilled laborers and debtors who were held in servitude by their creditor. And yes, at the very bottom were the native Indians and black slaves.

Whichever way one looked at it, the upper echelons of Spanish colonial society were dominated by Spaniards who held positions of privilege and political power that they were essentially born to. But even at that, there was a sharp split that existed between the wealthy born in Spain and those born in California.

While the relationship between the two groups was friendly, it could also be antagonistic. Those born in Spain looked down on those born in California. Yes, believe it or not, the wealthy born in California were seen as inferior. And yes, the Spanish crown's preference was for Spanish-born Spaniards for positions in government and for church posts. This riled California born Spaniards. And yes, this resentment helped fuel the wars for independence later.

Despite there being an overall prejudice against anyone who labored with their hands, Spanish craftsmen did so. In fact, Spanish craftsmen were employed for their skills. Although, Spaniards were likely to be the managers and foremen over the peons and the Indians who did the hard physical unskilled labor such as farming, planting, harvesting crops, herding cattle, and all other things agriculturally.

The "Californio" Vaquero was said to be of upper class. With the introduction of the horse to the Americas by the Spaniards, horses became a status symbol. Horses represented wealth simply because horses were not cheap. But they also represented mobility, speed, and a superior physical vantage point. This in turn was said to project an air of Spanish superiority over the lower classes.

The "Californio" Vaquero was an extension of the Spanish Vaquero who brought their cattle-raising traditions as well as both horses and domesticated cattle to the Americas. Just as in Florida, how the legacy of the Spanish Vaquero there in the 1500s can still be seen there, the same can be said about California. Among those vaquero are the "mesteñeros", or "mustang runners". They were vaquero who caught, broke and drove wild horses, called mesteños or mustangs, to market in Northern Mexico, Texas, New Mexico and California. These Mesteñeros operated primarily in the Great Plains from Texas and New Mexico in the 1700s. But during the 1800s, they primarily operated in California's San Joaquin Valley.

The lifestyle and language of the Vaquero, their saddles and tack, their dress, their traditions would all later merge with English cultural traditions and produced what we know as the American Cowboy. But the "Californio" Vaquero is vastly different than the American Cowboy in a number of ways.

Where the American Cowboy worked atop a horse and off to do ground work during brandings and such, the "Californio" Vaquero did not. He was strictly a horsemen and roper, the ground work and herding of cattle was done by peons of lesser class. He was of such a class that he did not do such work.

By Spanish law, peons, all of those of lowers classes were forbidden from owning guns or bearing any other sorts of arms. Keeping the peons unarmed was a way to prevent armed rebellions.

Spanish laws to keep the people disarmed were created and in place to keep those in power in power. The enforcement of this prohibition was actually assisted along by the popular belief of the times that said bearing arms, like riding a horse, was a prerogative of the upper class and being Spanish.

As for the family itself, during that time it was patriarchal with the son following his father's wishes. As for women in Spanish California, while the caste system was prominent in Spanish colonial societal, women had full rights of property ownership and control. That is unless she was married or had a father, the males had almost complete control of all family members.

A formal education system in California had yet to be created so it fell to the individual families to educate their children among them. While it was traditionally done by the mission priests, the upper classes also hired private tutors. In contrast, few early peons knew how to read or write.

So image this for a moment, by the time Mexico attained independence in 1821, only 20 private ranches existed in Alta California. The Californio rancho owners claimed about 8,600,000 acres. And if you look at the map above and then realize that Altoa California did not have the same borders as the state of California has today, you can see that those ranchos were massive kingdoms within themselves. 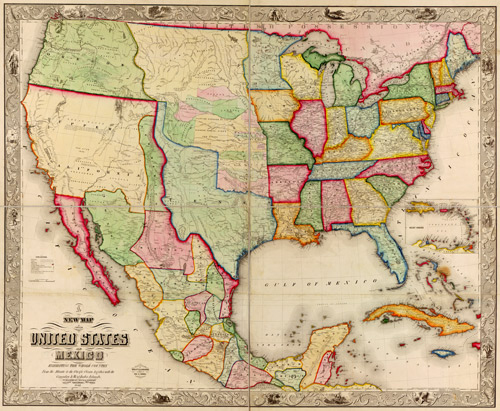 A New Map of Texas, Oregon and California 1847
By 1847, that map had not changed that much, but still by the end of the Mexican era which only last 26 years, the number of land grants in California had increased from 20 to 800. So from the early 1820’s until the California Gold Rush, Spanish and Mexican rulers granted over 800 large tracts of California land. They were the real power in Old California.

Those who owned the ranchos lived in a grand style emulating the wealthy hidalgos in Spain. A "hidalgo" is a member of the Spanish or Portuguese nobility. And yes, just as Lords of a castle, they expected the non-rancho owning population to support this lifestyle.

All in all, they were California royalty. These were all males and as Californio Vaqueros themselves, they rode everywhere which made them excellent riders. They indulged in fiestas, fandangos, rodeos, and roundups. As "Dons", which is Spanish and Portuguese for "Lords", the rancho owners also went from rancho to rancho to weddings, christenings, and funerals as royalty.

So yes, all in all, in Spanish California, in Old California, the Californio which were actually the Spanish elite. They were the top of the caste system which meant they were born to rule. And they did rule with an iron fist.

As for the general public, since there were really only two classes, the rich and the poor, the lower classes were little more than slaves to the wealthy land owners and politicians who actually only numbered a few.