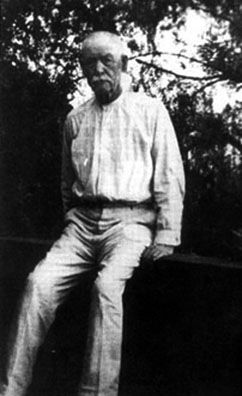 In this series on Wyatt Earp, I decided to talk about some of my sources.

Since many of you have written to ask, I've shared with you the fact that while I use bits and pieces of information from other sources and, of course, newspapers and journals and such.

In this series, I also wanted to take a look at Wyatt Earp's biography Wyatt Earp: Frontier Marshal, which author Stuart N. Lake himself admitted to fabricating.

I wanted to take a look at how and why it came about. I wanted to look at how it was received and if it was challenged, which it was many times over the years. I also wanted to find out if there were others who told a more honest version of the man that most Americans have come to believe was a hero and iconic lawman of the Old West.

While I'm sure that I didn't mention every book ever written about Wyatt Earp, after all, how could I? I really just wanted you to see what sources I've used in one way or another.

Yes, I found out that many authors took up the challenge and did a great deal of research looking into who Wyatt Earp really was. Some, sorry to say, furthered the myth instead of clearing the fog. Some did it for self-serving reasons, such as simply wanting fame for themselves. And yes, there were others who tried to maintain some semblance of unbiased reporting of the facts.

But if one thing can be learned from this, it's that some images, once cemented in the minds of the American public, simply cannot be dispelled even with the truth. And yes, that brings me to this question:

Why does Stuart Lake's fabricated image of Wyatt Earp prevail and endure over all of these years?

In my opinion, for whatever that's worth, it has to do with it being a good story. Even though it isn't real and just a fake, it is a good story. It is a story that people like. 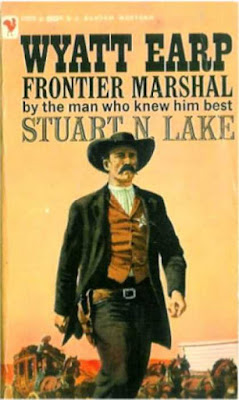 Stuart Lake's book on Wyatt Earp was a favorite of many because it's a tale full of adventurers, drama, violence, and even revenge. Its hero is someone that many admire in one way or another. And yes, that's especially true in the midst of the Great Depression when it came out. Those were hard times, and people were looking for a "believable" hero. Lake's book gave them one.

But more importantly, it was a hit because Lake's book was made for Hollywood. In the 1930s, "Cowboy" films were all the rage, and producers were looking everywhere for new material that was halfway believable.

The first film using Stuart Lake's fiction about Wyatt Earp was called Frontier Marshal, which was produced by Sol M. Wurtzel in 1934. It is said that even before the movie was released, Wyatt Earp's widow Josephine Earp sued 20th Century Fox for $50,000 in an attempt to keep them from making the film.

Supposedly she looked at it as an "unauthorized portrayal" of Wyatt Earp. Which to most means that she wasn't getting paid for it. And to that end, she succeeded in getting Wyatt's name completely removed from the movie. Instead, his character in the movie is re-named "Michael Wyatt." But yes, the movie was still released as Frontier Marshal to draw an audience familiar with Lake's book Wyatt Earp: Frontier Marshal.

A second version of the same film using the same title, Frontier Marshal, starred Randolph Scott and was directed by Sol M. Wurtzel again. It was produced in 1939. Again Josephine Earp threatened to sue, but this time she settled for $5,000. So yes, it was OK to use Wyatt Earp's name since she was paid.

Stuart Lake retold this same story in a 1946 book that director John Ford developed into the movie My Darling Clementine starring Henry Fonda in a town that looked nothing like Tombstone. Instead of a town of 10,000 people in 1881, it was a sparse corral out in the middle of nowhere. But still, that film also boosted Wyatt Earp's reputation.

After the movie Gunfight at the O.K. Corral was released in 1957, the shootout that took place near the OK Corral became known by that name. And no, the story isn't close to what took place. But frankly, it's one of my favorites "shoot 'em ups!"

Since then, Stuart Lake's version of Wyatt Earp has been portrayed a number of times by all sorts of actors. For the most part, most make him look like the virtuous lawman, So yes, most are still just fiction.

The movie Tombstone is one of my favorite OK Corral movies. Besides, Doc Holliday had a lot of bullets in his six guns that he's not supposed to be carrying because of the No Gun City Ordinance in Tombstone. There is another problem with the movie. It has to do with the fire when the Earps and Holliday make their walk down to the OK Corral. Do you remember that in the film, there was a fire in the background?

Remember, the "cowboys" were in violation of a city ordinance. That's it. That means the most that could have happened was a $20 to $25 dollar fine for wearing a gun openly in plain view in town.

In the film, there is a fire taking place behind them. In real life, a fire was the number one threat in the Old West. If the city police would have decided to go enforce a city ordinance instead of fighting that fire, which in real life never took place, I believe the Earps and Holliday would have been run out of town on a rail.

And on Earp's vendetta ride in the movie Tombstone, they leave out Warren Earp, who was part of the actual posse in 1882. And in the movie, they also kill at least a dozen or more sash-wearing bad guys. That did not happen in real life.

It makes great theater, wonderful acting, but it's not even close to the truth. As for Kurt Russell and Val Kilmer, they are my favorite Wyatt Earp and Doc Holliday of any OK Corral movie. I can see them being close to looking like that.

As for the movie entitled Wyatt Earp starring Kevin Costner in the lead role of Wyatt Earp, that movie was just bad from beginning to end. I think really think Kevin Costner played a horrible Wyatt Earp. For me, after reading about how Earp was not a shy businessman and self-promoter, I don't believe Wyatt Earp had that dark persona that Costner portrayed him as having.

Remember, even in his later years, the real Wyatt Earp was known to hang around Hollywood studios and spin yarns about the Old West. So no, I don't see Earp as being as quiet as some say he was.

My older brother and I were talking a few months before he passed away last November 3rd, 2016. Like me, he loved watching the old reruns of The Life and Legend of Wyatt Earp on the Encore Western Channel. He didn't read a lot about Wyatt Earp, so he took what he saw on television as being who Wyatt Earp really was.

For me, I remember how he and I watched The Life and Legend of Wyatt Earp as kids in the 1950s and early 1960s. We both loved it. I got older and started researching history. And yes, there are times that I find it sort of sad that I learned the truth about who Wyatt Earp really was.

So who was Wyatt Earp, you ask?

Well, for me, since some of you have asked for my opinion on Wyatt Earp for what that's worth, here it is. And please remember, this is just my opinion looking at everything that I can find on Earp that doesn't seem like it was written by some fan of his. Remember, I treat looking at historical figures as a crime investigator. I gather evidence and try to remain impartial until I'm finish gathering as much evidence as I can.

Of course, in some cases, it's simply human to say to yourself, "This so-and-so is a bum!" after finding out more about someone. Heck, read some of the many comments, and you will find a number of readers who have written to me to call me "a bum" and worse. Mostly it's because I found out something about their hero that I wrote about, and they feel I was trying to besmirch a legend.

So for me, I believe Wyatt Earp really showed his true colors, showed the world who he really was, back in San Francisco in 1896 when he refereed the Fitzsimmons vs. Sharkey Heavyweight Championship boxing match. If you want to read about what took place, here's the link to a post that I wrote on the incident: Wyatt Earp -- From Unknown To Notorious Desperado

Back then, people did not know who Wyatt Earp was. And because of that, people did not see Earp as a "heroic frontier marshal." This was simply because his book had not been published yet, and most never ever heard of the OK Corral.

Because people did not know who he was, people were not biased to think he was some sort of hero. That's simply because no one saw the Hollywood creation called "Wyatt Earp" until later. What they saw in 1896 was the real deal and not the fabrication.

Instead of seeing what we have come to believe as the man who tamed the West, in 1886, people from coast to coast knew him as a dirty referee. Yes, someone who fixed the heavyweight championship and then ran from the ring as fast as he could before many in the crowd realized what had happened. And yes, that should tell people volumes about the man.

One Earp researcher once said, "Wyatt Earp got more notoriety around that boxing fight than he ever did with the gunfight." And frankly, I agree.

Hollywood has turned Wyatt Earp into a gunslinger without compare, a man who never shirked his responsibilities, who would never do wrong, who was brave, courageous, and bold, just like the song says. And yes, Hollywood sticks to the myth it created while refusing to make a movie about how Wyatt Earp officiated the Fitzsimmons-Sharkey fight on December 2nd, 1896.

My belief is that Hollywood refuses to make a movie about the real story of how Wyatt Earp was involved with fixing the Fitzsimmons-Sharkey fight. They refuse because it would ruin a myth that has made Hollywood a great deal of money for more than 80 years.

So as for me, when my late brother Herman Ray used to ask me who Wyatt Earp really was, for his sake, I always replied, "I'll tell you this, he was certainly not Hugh O'Brian."

And yes, I always left it at that.