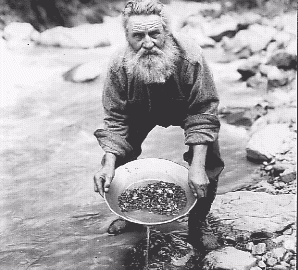 Since my regular readers know that a great deal of my research material comes from archived newspapers, court documents, journals, and other sources of documentation, I wanted to share with you a few abstracts of letters from a miner who came to the Far West during the California Gold Rush in 1849.

The California Gold Rush began on January 24th, 1848, when gold was found by James W. Marshall at Sutter's Mill in Coloma, California. Some say it only lasted from 1848 to 1855.

The 1849 miner Jacob Thrailkill was born in Tennessee on January 26th, 1812, to James Thrailkill and Susannah Ham. He moved on to Missouri and then to Ft. Des Moines, Iowa, where he established a farm. He married Eleanor "Nelly" Ann Knaoy, also listed as Nellie Ann Kenaoye, in 1831. He and Nelly had six children. But sadly, Nelly died in 1846.

Jacob remarried shortly afterwards to Sarah B. Ferguson. Some reports say they had two children, other reports say only a son Thomas. Jacob went missing in Panama en route home, and declared dead in 1851.

One letter is from April 29th, 1849, from "Near Council Bluffs, Iowa". One is from September 16th, 1849 from "Columa California". And the last letter is from February 14th, 1850 from "Georgetown sixty miles east of Sacramento City". A fourth letter is from M.C. Ferguson in "Charaton Cty, Mo" dated Jan 28th, 1848, addressed "Dear brothers and sisters" and sent to Jacob in Ft. Des Moines.

These letters are now archived at the California State Library They are all are transcribed. And in addition there are two pages of family genealogical notes, one is on a sheet with a colored lithograph.

Jacob's letter from April 29th, 1849, from Near Council Bluffs, Iowa, is a brief report on the journey since leaving home. He states that they have arrived in good time to meet with others to begin the journey across the plains and plan on crossing the Missouri River in the morning. While he mentions practical details, he also sounds a bit mournful.

"The provisions you cooked for us lasted till we arrived here except part of the ham, which was eaten up by a dog one night. The cows are of great use to us, partly for work, but particularly for the milk. -- The team is in fine condition, improving daily. Our cooking, milking, &c, goes off nicely since we made our mess box, got our cooking utensils &c."

"Though we left you while the elements were in commotion and ourselves in tears, yet we had much pleasant weather before our arrival here, and a calmness of feeling resulting from a trust in the providence of God that he will protect both you and us, while present or far absent."

His next letter is from September 16th, 1849 from "Columa, California." He is now in Coloma, and is getting ready to begin digging for gold with associates from home. He talked a little about the route traveled from Salt Lake City across the Great Basin, and that he is pleased with California.

"It is called the Great Basin because its waters do not run off to either of the Oceans, but run down in the valleys and sink into the ground."

"Myself, Howe, Hezekiah, Goodnough and McHenry are working together at the mining business. We got here a week ago to day and have been taking care of our cattle and recruiting ourselves. Tomorrow we commence business."

"The country is very healthy, the ground covered with a beautiful forrest of Oak and Pine trees, gold is inexhaustible the whole ground being filled with it."

In his letter from Coloma, Jacob goes on to offer advice to others making the journey across the plains. He states, "I would advise those coming the overland route to get strong 2 horse wagons, tine well set, from four to six yoke of cattle not less than five nor more than eight years of age, and not bring more than 1000 to 1200 pounds. We were green in these matters when we started, but now we are ripe and capable of giving advise. Never get loose made cattle -- bulls nor stags".

And yes, in that letter he actually encourages his wife to think about joining him in California, writing, "If you should come bring garden seeds of all kinds and especially Onion seeds as onions are worth one dollar a pound."

He closes his Coloma letter by asking about their children. "I wish in your next letter you would tell me how the children are doing at school, and whether Thomas Benton can talk yet."

His last letter is from February 14th, 1850 from "Georgetown sixty miles east of Sacramento City" where he, Hezikiah, and Howe are still together.

"We are stopping here a few days until the snow melts off the mountains so that we can go higher up, and expect to remain together until we return, which I ardently hope may be soon but will be somewhat owing to our success within the next few weeks."

Then he goes on to talk about his concern for what is taking place with the farm in Iowa, writing, "It grieves me very much to think you have been put to so much trouble on account of the crops not being properly tended. Also on account of the children so many of them being sick at the same time and for such a length of time. I trust it will not be long before I will be with you and in a condition to render paternal relief."

He described the California winter weather by writing this, "Sacramento City has been entirely overflowed, which caused a great loss of property estimated at two [mill]ions of dollars. The water was from 5 to 12 feet deep in the City and boats were rowed all about the streets. It is a very common thing for us to wade through snow two or three feet deep and in two hours or less time be traveling in a pleasant valley where vegitation is rapidly growing and the weather uncomfortably warm. This is the spring season of the year here."

He closed his last letter with thoughts of home, saying, "Hoping that Kind Providence will still preserve us until we meet again I remain your affectionate husband, Jacob Thrailkill."

Jacob left for California in early 1849. He traveled overland and arrived safely in late summer. He was first in Coloma where gold was first discovered. Then he wintered in Georgetown near Hangtown, before moving on into the Sierra when the spring mining season got underway.

According to family history, Jacob Thrailkill succeeded in his mining venture and left to return home with his "pile" in November of 1850. Yes, just before most of the placer gold petered out.

Jacob Thrailkill's California Gold Rush letters, 1848-1850, are kept in the California State Library. They were donated by Gary Schwartz "In memory of Mary Katherine Schwartz, Esq., BA in 1940, University of New Mexico; JD: 1959, University of Miami".

As with other letters, the three letters from Jacob Thrailkill to his wife, Sarah in Fort Des Moines, Polk County, Iowa, gives us a peek into the live of the 49ers who went to California during the Gold Rush. His letters allow us a small glimpse into how is was during the early days of the Gold Rush.

With over 500 small placer mining camps doting the Sierras during the Gold Rush, by 1851, just 3 years after its initial discovery, placer mining was already coming to an end. And yes, as more and more miners flooded into the Sierra, there were too many people for profitable placer mining. Soon it became very clear that individual miners were no longer making money.

For miners to be profitable, they had to dig deeper in the ground and soon hydraulic mining machinery were necessary to keep mining in business. Letters from those who came during that time, the ones who arrived after the placer gold was played out sound very different. They are the ones who will write home about working for day wages and returning east with empty pockets.

As for Jacob Thraikill, his family records state: "Jacob Thrailkill left the Pacific Coast by steamer in November 1850 and was lost on the isthmus of Panama and never was heard of afterwards".

It's no telling if he was waylaid by bandits, robbed and killed, or if somehow he fell ill from any of a number of diseases there. All in all, to me, his never making it home again is a sad fate for a man who endeavored to do good for his family. Yes, a sad fate indeed.