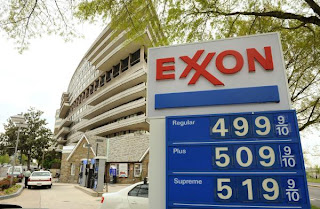 This picture of the EXXON gas station was taken on April 19, 2011 in Washington, DC.

Gas prices have reached over $5 a gallon at gas stations in 8 states.

It was reported on the News yesterday that there are people in many states who will have to pay over $6 a gallon in the next month.

Right now, more than ever, there is NO EXCUSE for not drilling in ANWR right now. It is estimated that with just the oil in that barren land called ANWR in Alaska, we could fuel America for the next 100 years.

And yes, we should be shipping rigs and tanks and the makings for an Oil Facility as I write this.

What does ANWR stand for? ANWR is the abbreviation for the Arctic National Wildlife Refuge. 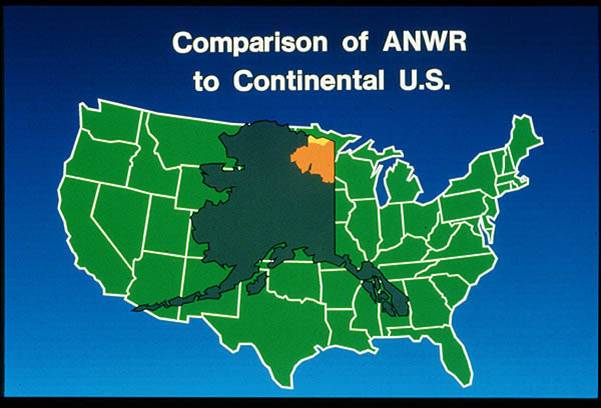 In all of Alaska, ANWR is only 19 million acres.

Yes, that's it! Imagine that for a minute.

A mere 2,000 acres in a refuge that is 19 million acres big, that's what the Environmentalist, the Obama White House, and their Foreign Oil contributors are all fighting Americans over.

And why is the Obama White House, Environmentalist Groups, and Foreign Oil fighting Americans so hard?

Well first it's to ensure market dominance with us having to import 77% of the oil we use in our country from Foreign Oil Producing countries.  Secondly, drilling in Area 10-02 in ANWR would mean $25 a barrel instead of $130 a barrel of crude.

That my friends, translates to Billions upon Billions of Dollars in the pockets of Foreign Oil.   And that's the reason why they are keeping Americans from drilling in the small 2,000 acre piece of land.


Then consider the fact that we have the tool, the know how, and the capability to cut our National Trade Deficit in half right now, but Washington doesn't want that to happen.  To me, it's like having the tools, know how, and capability to defend yourself - but instead you purposely opt for an ass whoop'n!

As for size and scope of what is needed?  Well compare the size of ANWR and Area 10-02, which is the proposed area to drill, to the Continental United States.

ANWR is about as big as the State of South Carolina.  The actual proposed drilling site is only 2,000 acres which by Western standards is a good size but not extremely big cattle ranch.

Heck, there are land owners out in this area that exceed the 2,000 acres needed.  And yes, their ranches are almost considered small by some folks around here. 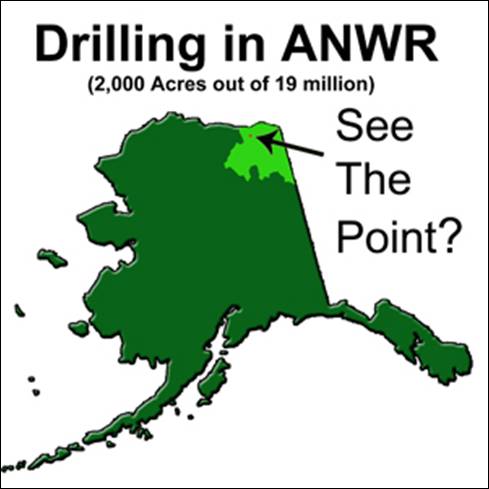 If you look at the detailed map of the proposed drilling site in ANWR, you can easily see that it is relatively close to Sourdough and Prudhoe Bay Oil Fields. 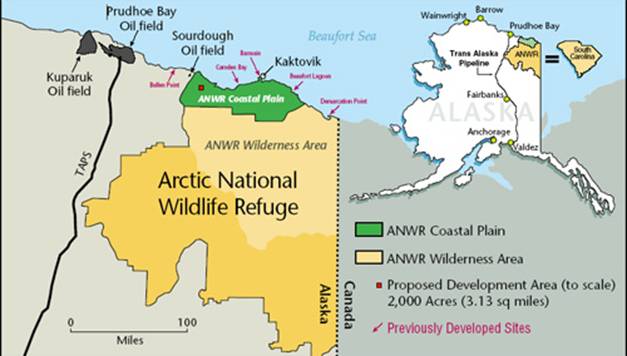 So OK, you say you know one of those Environmentalist Groups who are being funded by Foreign Oil and who are trying their damnedest to spread the lie that ANWR and the surrounding area up there is just a lush pristine paradise.

You know the type, liars who look you right in the eye while they could care less about your problems making ends meet.  They were born rich with silver spoons in their mouths, and have never held a real job because there Daddy provides them with Gold Cards.  They can't hold a job, but at the same time don't see anything wrong with taking money from Foreign Oil or Big Liberal donors like George Soros.

Maybe they have told you that it's a virtual garden of Eden up there where animals and flowers flourish?  Or maybe they're trying to get good hard working people to belief that anything American is evil and that American Oil Companies have completely killed off the caribou and decimated the bear population?

And don't forget their example, they love saying, "Look at what happened when the Big Oil Companies decided to drill in Prudhoe Bay!  They ruined the ecosystem and most of the animals that used to go there are gone now!"

﻿
﻿﻿﻿﻿﻿Pictures from on the ground, in the air, and even by satellite don't lie. 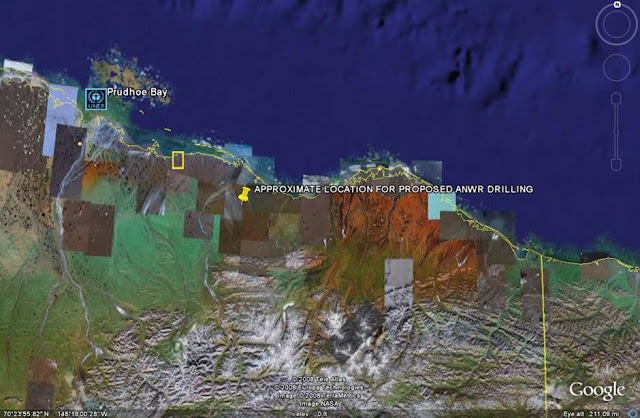 These satellite pictures show just how barren Area 10-02 truly is.

But wait, here's another great picture!  And yes, you have to see this to understand what's already up there - next to ANWR to the East.

See besides American Kuparuk, Prudhoe Bay and Sourdough Oil Fields to the West of Area 10-02 in ANWR, there are other Oil Companies up there to the East who are already drilling close to ANWR.

And yes, they have been for many years now!

Take note of where Canadian Boundary Creek and Smoking Hills Formations are located in relation to the 19 Million acre ANWR and the small 2,000 acres of land that is needed for oil drilling known as Area 10-02.

Yes, it's Canada.  And I love Canada, those are some great folks up there.  They understand the worth of their Natural Resources to their National Economy.

Heck, Canada's Oil Reserves are as much as 7 of those 10 combined.


The U.S. Department of Energy has a good primer on the Arctic National Wildlife Refuge.

It is a summary of policy positions and facts about ANWR, such as how drilling in ANWR could produce a million barrels a day, as well as 150 billion cubic feet of gas per year!

All from just a 2,000 acre investment and DRILLING NOW!

We all know that oil production is measured by barrel.  Natural Gas on the other hand is usually measured by volume and is stated in cubic feet.  A cubic foot of gas is the amount of gas needed to fill a volume of one cubic foot under set conditions of pressure and temperature.

Friends, a Million barrels a day and 150 billion cubic feet of gas per year is called American self-sufficiency.

It would give us time, and would put Americans in a better position than we are today.  Instead of rushing out unreliable alternative energy vehicles that break us financially, it would be better for everyone if we would be able to buy energy efficient cars or install new alternative energy solutions in our homes without driving us into Bankruptcy while we're doing it.

Heck, even the Alaska Legislature passed a resolution supporting ANWR 60 to Zero.

Both Democrats and Republicans in Alaska voted for it unanimously.  Anyone who knows politics knows that a unanimous vote is far from ever happening in the United States Congress.

Click here to view the rest of the Facts about ANWR. (PDF)

Of course there are consequences to not drilling.  Some understand that, while some don't.  And yes, there are those who think our plight is a laughing matter. 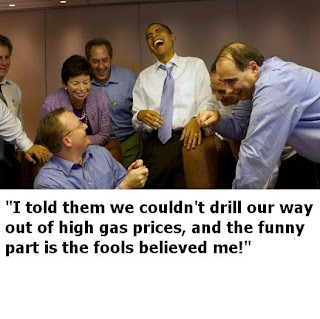