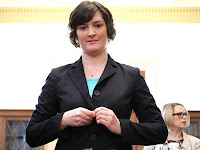 Like many others, I've heard about Rush Limbaugh catching all sorts of flak from the Liberal Media because he called Sandra Fluke a "slut."

So OK, I can't help but be curious as to why he would have said that?

After looking into this, I've found out that on the morning of Wednesday, February 29th, 2012, a hearing on women's health was conducted to combat the Congressional hearing that was being held by Rep. Darrell Issa (R-CA) on the Obama Care Mandate which violates the First Amendment of the United States Constitution.

Rep. Darrell Issa (R-CA) picked a panel of Clergymen to testify on the Obama Care Mandate that is trying to force Religious Institutions to distribute contraceptives and afford its employees abortion counseling if requested - even if it goes against the basic teachings of the church.

The Liberal Media has conveniently pushed aside that primary issue by focusing on women wanting free contraceptives. This of course is the standard Liberal Media tactic of taking the heat off the Obama Administration.

The issue is not free contraceptives for women. The issue that the Liberal Media wants to divert attention away from is the Obama Care Mandate of Religious Institutions to adhere to Federal Regulations that directly oppose the religious doctrine of the Catholic Church.

Folks, no matter what the Liberal Media trys to say, that's the real issue here!

The Liberal Media would make Americans believe that the discussion is about a women's right to free contraception coverage. During the hearing with the Clergymen, who represented the primary religions in the United States, Democrats wanted to know "where are the women on the panel?"

For some reason, probably out of convenience, the Democrats at the hearing seemed to completely reject the fact that the hearing was not about "contraceptives" - but was in fact about our First Amendment Religious Freedoms.

So another hearing on free contraceptives was called by House Minority Leader Nancy Pelosi. She wanted to steer the discussion away from that of our First Amendment Religious Rights and over to a women's need for free contraceptives.

It is apparent to me that free condoms seem to be more important to the Democrats in Washington D.C., then is our Freedom of Religion.

Nancy Pelosi arranged for a Georgetown Law Student named Sandra Fluke to testify in support of the need for free contraceptive coverage which is included in the Obama Care Mandate - otherwise known as the Affordable Care Act which was passed by Democrats in 2010 before they were ousted from Congress.

So Sandra Fluke was seated to testify before the House Committee on Oversight and Government Reform on a women's need for free contraceptives.

During her testimony, she said, "I don't understand how you can have an open conversation without hearing from the women who have been personally affected by this."

Personally affected by what? The law has not gone into effect yet, besides it is not a discussion about a women's need for free contraceptives. You would think that a Third Year Law Student would understand what the initial hearing was about? It is about our Religious Freedom!

During here testimony, she said, "I attend a Jesuit law school that does not provide contraceptive coverage in its student health plan. And just as we students have faced financial, emotional, and medical burdens as a result, employees at religiously-affiliated hospitals and institutions and universities across the country have suffered similar burdens."

Of course she does not mention that the reason that a Catholic Institution such as Georgetown University does not furnish contraceptives is because contraception is against the teachings of the Catholic Church and its religious doctrine.

It is obvious that she is incapable of respecting the religious doctrine of any religion. It would have been interesting to hear her complain if she were attending a Muslim University with Islamic teachings.

But she goes on and says, "We are all grateful for the new regulation that will meet the critical health care needs of so many women. Simultaneously, the recently announced adjustment addresses any potential conflict with the religious identity of Catholic or Jesuit institutions."

As my grandpa would say, "that is her opinion - and she is wrong." For Catholics it would be a conflict, but don't advise her of this - I'd hate to trouble her with facts.

Then she went on, saying that on a daily basis that she has heard about the plight of women, especially one, who "works for a religiously-affiliated employer, and they tell me that they have suffered financially and emotionally and medically because of this lack of coverage."

Then she gets dramatic and says, "And so, I’m here today to share their voices, and I want to thank you for allowing them – not me – to be heard. Without insurance coverage, contraception, as you know, can cost a woman over $3,000.00 during law school."

No kidding! And yes, she's been in Georgetown University for at least 3 years! I can't help but wonder how that great education is turning out - if she or anyone else is not smart enough to know that $3,000.00 on condoms is insane.

But wait, there's more, she then goes on to say, "For a lot of students who, like me, are on public interest scholarships, that’s practically an entire summer’s salary.  40% of the female students at Georgetown Law reported to us that they struggle financially as a result of this policy."

OK, so from what I gather there are a lot of sexual activity going on at Georgetown University.

In fact, from what I'm hearing, I really can't understand how a Third Year Law Student who has spent $3,000.00 on condoms has time for classes. But hey, that's probably just me!

Fact is, there is no reason that condoms for Sandra Fluke or any other student should "cost a woman over $3,000.00 during law school." Heck, I've never even heard of "professional" women spending $3,000.00 on condoms.

For those such as Sandra Fluke and the 40% at Georgetown who are spending such big money on birth control and STD protection.

My friends, here's a great link for you. It should help any student strapped for condoms! No pun intended! 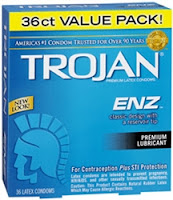 TROJAN Enz Condoms Lubricated Latex - 36 count for $15.36
As Sandra Fluke said, "For a lot of students who, like me, are on public interest scholarships, that’s practically an entire summer’s salary. 40% of the female students at Georgetown Law reported to us that they struggle financially as a result of this policy."
In my opinion, the problem of no free condoms for women who are as sexually active as that bunch back East needs to be addressed.
If female students need $1,000.00 worth of condoms a year, then that is indeed a Medical Crisis - and they have bigger prolems than just a bad reputation.
Now for you students, who like Sandra Fluke, who are extremely sexually active and spend a lot of cash on contraceptives - I have done some Homework for you.

Now as you can see, there are 36 in each box - so you will have a few left over each month if you just hold your sex drive down to once a day each month.

So for at least $287.88 a year, multiply that by 3 years, you will only spend $863.64 to get you through your Third Year of Law School at Georgetown.  That is a savings of $2136.36 for you. This extra savings is especially important for those students who are needing to find more money for beer, wine, and other sexual aids.

But hey, you will have 1296 condoms if you act now - and that will help you get to about the same level of education as Sandra Fluke is right now.

Friends, with links to cheap condoms and the money you save, you'll be missing classes and seeing your professors for "private tutoring sessions" until the cows come home!

And heck, I didn't even factor in the sale price of $15.36 - or bulk sales for those gals out there in Georgetown who may be going into business because of their desires - so the benefits of my help may just keep getting bigger and bigger! No pun intended!

Of course, there is no need to thank me. Although, I'm sure that the parents of those who I have helped appreciate my assistance.

Now getting back to being serious with this story.

This is just my opinion, but I really believe that if a woman needs to spend $3000.00 in 3 years on condoms because she has that huge of a sexual appetite - then that woman is not a "slut" like Rush Limbaugh said.

When I was in College, shameful as it was, yes there was a female student who was in fact known as "the campus slut." She got that reputation for sleeping with 4 different guys in a year. That's right, just four in a year! Who knows what kind of name they would 've had to come up with if others would have known that she spends $1000.00 a year on contraceptives?

But this new revelation of what's going on at Georgetown University goes way beyond just promiscuity. This moves way pass the extent of getting a bum rap that garners a guy or a gal a bad reputation. And yes, I also new a guy in college who was a known as a "campus slut." But this goes beyond that!

No, I believe that anyone who spends $3,000.00 on condoms goes way beyond being saddled with a horrible reputation as "the campus slut."

Fact is, after taking the financial numbers that Sandra Fluke has presented in her testimony into account, by looking at that kind of money, with knowing that Sandra Fluke said she spent "practically an entire summer’s salary" - just on contraceptives - well, then I really believe that she might qualify as someone with real problems.

This would be in the realm of someone who has, as she said, "critical health care needs."

Seriously, if I were a parent of a young women who said that she might be having to "struggle financially" because she can't get free condoms - I would definitely be concerned.