Under Obama, Oil and Gas Production in Decline on Federal Lands by 40%

Below, I have posted an article entitled IER Analysis: Oil and Gas Production Declines on Federal Lands in FY2011.

The Institute for Energy Research (IER) posted this article on their website, and in my opinion, this is information that we the public needs to know.

This is the sort of facts and figures that we all need when we contact our Representatives and Senators asking them why Domestic Oil Production is down instead of up? to turn up the

Because of a turbulent Middle-East, I would think that our Federal government is taking actions to increase our Domestic Oil and Gas production output.  Instead, the more I read, the more I find out that the Obama Administration is slowing production - not increasing it.

This is an interesting article in that it was written by the Institute for Energy Research as an answer to  Representative Edward Markey (D-Mass.) recently sent a letter to the Energy Information Administration (EIA).

It appears the Congressman was unhappy about the way the Energy Information Administration reported its findings on Domestic Oil and Gas Production on Federal lands.

Despite the Obama administration’s restrictive policies for oil and gas production on federal lands, overall production still increased thanks to the pro-energy policies in states like North Dakota.

“North Dakota has been the poster child for what can happen when we unleash free enterprise and allow states to develop and commercialize their resources,” Heritage’s Nick Loris wrote recently on The Foundry. “North Dakota is drilling at record pace.”

The result: North Dakota’s unemployment rate is 3.4 percent, the lowest in the country. According to a recent report from IHS Global Insight, North Dakota already returned to pre-recession employment along with energy-rich Alaska. Texas is expected to do so in the first quarter of 2012, followed by Nebraska and South Dakota next year.

Those states all have something in common: energy production.

That policy aligns with recommendations from Obama’s own Council on Jobs and Competitiveness, which yesterday issued a report calling for more energy production that includes drilling and pipelines. Here’s the language from the Jobs Council report:

As a nation, we need to take advantage of all our natural resources to spur economic growth, create jobs and reduce the country’s dependence on foreign oil. First, we should allow more access to oil, natural gas and coal opportunities on federal lands.

Where sources of shale natural gas have been uncovered, federal, state and local authorities should encourage its safe and responsible extraction.

While the administration has supported holding additional lease sales and evaluating new areas for drilling, further expanding and expediting the domestic production of fossil fuels both offshore and onshore (in conjunction with more electric and natural gas vehicles) will reduce America’s reliance on foreign oil and the huge outflow of U.S. dollars this reliance entails.

In addition, policies that encourage rapid lease development while emphasizing the highest safety standards will ensure companies responsibly drill for natural gas or oil and mine for coal or other our minerals in federal areas in a timely manner.

With the Keystone XL decision, Obama rejected that advice. “At a time when unemployment remains unacceptably high, Iran is threatening the Strait of Hormuz, and Canada is looking to take this oil elsewhere, it is difficult to understand how the President could say no to thousands of jobs and an increase in energy supply from our ally,” Loris wrote in reaction to the decision.

So why isn't the Obama Administration and its Democrats in Congress more worried about increasing production and subsequently making America more energy independent while lowering gas prices at the pump?

I don't know why Obama has made it so tough for Oil Companies to produce on Federal land. Some say it's to keep gas prices high to force people to turn to alternative energy. Some say it is to force Americans to accept his plan to fundamentally change America.

I don't know what his reasons are for not helping Americans. I really believe that, and its what I also get from the article below, it seems that Democrats like Rep. Edward Markey (D-MA) are more worried about trying to cover their backsides in an Election Year than they are about helping Americans.

"EIA has included information on the production of oil and natural gas on Federal lands in the AER that significantly under-represents what is actually occurring:" letter from Rep. Edward Markey to Howard Gruenspecht, Acting Administrator of the Energy Information Administration.

Markey’s interest in writing to EIA was to indicate that the production volumes reported on Federal lands by EIA were low, and to point out that production rose in fiscal year 2010, rather than declined as the EIA data showed and as the Institute for Energy Research (IER) and the Heritage Foundation reported on their websites.

EIA has yet to correct its reporting problem, and is waiting on the Department of the Interior (DOI) to provide correct data. In the meantime, IER painstakingly generated the available data for fiscal years 2006 through 2011 from reports buried in the Department of Interior’s website.

What Does the ONRR Data Show? 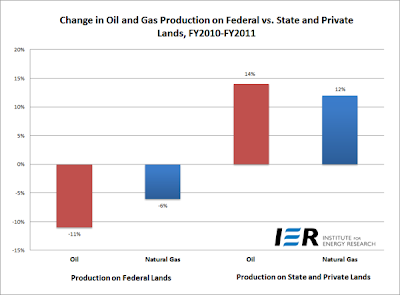 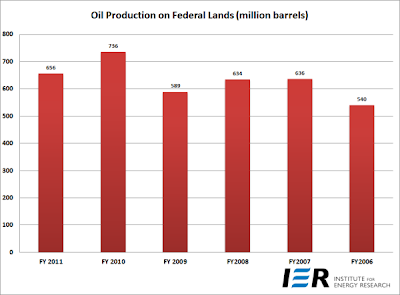 Sources: Department of the Interior, Office of Natural Resources Revenue, http://www.onrr.gov/ONRRWebStats/ExportReport.aspx?report=AllNonRevenueVolumesByCategoryAndCommodity&yeartype=FY&year=2011&datetype=AY
and http://www.onrr.gov/ONRRWebStats/Disbursements_Royalties.aspx?report=AllReportedRoyaltyRevenues&yeartype=FY&year=2011&datetype=AY 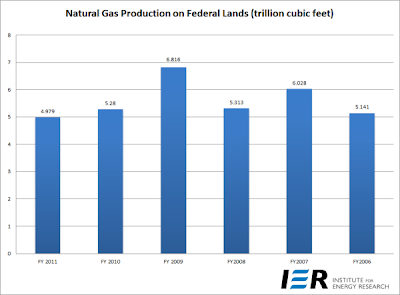 Sources: Department of the Interior, Office of Natural Resources Revenue, http://www.onrr.gov/ONRRWebStats/ExportReport.aspx?report=AllNonRevenueVolumesByCategoryAndCommodity&yeartype=FY&year=2011&datetype=AY
and http://www.onrr.gov/ONRRWebStats/Disbursements_Royalties.aspx?report=AllReportedRoyaltyRevenues&yeartype=FY&year=2011&datetype=AY

The above trend indicates the Obama Administration policies that IER reported are causing lower oil and natural gas production on taxpayer-owned lands.[iv] These policies include limiting the offshore areas where oil can be produced, leasing much less land than previous administrations, cancelling oil leases, withdrawing oil leases and slow-walking the issuance of permits that allow domestic energy production. (For more of the Obama administration’s anti-energy actions, click here.)

In obtaining the data for this analysis from the DOI’s Office of Natural Resources Revenue (ONRR) website, IER noted the following:

•Data were unavailable on the ONRR website for non-revenue production on federal lands prior to fiscal year 2006. IER received the following message when asking for fiscal year 2005 data: “An error has occurred while processing your request. Please try again. If the problem persists, please contact MMS Customer Support at 1-877-256-6260. When speaking with customer support, a federal official stated that “an error has occurred in the MRM Statistical Reporting application.”

•The data given to Rep. Markey by ONRR is different from what is reported on the agency’s website. For example, in his letter to EIA, Rep. Markey indicated that non-revenue oil production on federal lands in FY 2010 was 312 million barrels, but the ONRR website reports 351 million barrels.

•Non-revenue production volumes by fuel type are not evident on ONRR’s statistical website. For more about ongoing data transparency issues at the Department of Interior, click here.

Rep. Markey was right to ask the U.S. Energy Information Administration to correct its information in the Annual Energy Review, which are not easily obtainable from the Department of Interior either by the general public or by other federal agencies or the Congress.

Our nation needs to produce energy, revenue and especially, jobs. Meanwhile, state and private lands are rapidly increasing energy production. There is clearly a need for policy changes that encourage energy production on federal government lands.


Reprinted here as a service to the public.