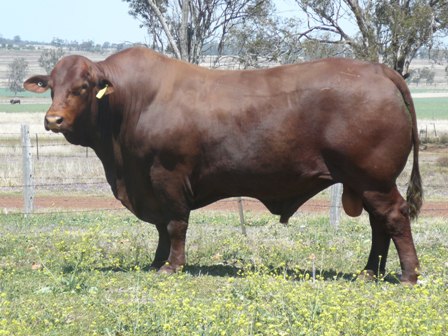 I was asked by a youngster in 4H to talk about Santa Gertrudis cattle. So here goes. And yes, we may as well start with their name.

About 1910, the King Ranch of Kingsville, Texas, one of the largest ranches in the United States, became interested in the possibilities of using Brahman cattle to improve the performance of the range cattle in their area.


Tom O'Connor obtained some Bos indicus cattle from the Pierce Ranch in Pierce, Texas, gave a half blood Shorthorn-Brahman bull to the King Ranch. He was mated with a group of purebred Shorthorn females. All male calves from this cross but one, a red bull called Chemmera, were castrated and the heifers were turned out with Shorthorn bulls.

In the fall of 1918 about sixty descendants of the O'Connor bull and his son were placed in a high quality pasture and their performance was such that the Kings Ranch became interested in crossbreeding Shorthorns and Brahmans. Since no purebred Brahmans were available, the King Ranch purchased 52 bulls of 3/4 to 7/8 Bos indicus for breeding. These were the best three-year-old bulls that they could obtain from the Pierce herd.

At this time the American Brahman breed as such did not exist nor were there pure-breed Bos indicus available in the United States. These bulls were three-fourths and seven-eighths Brahman. The bulls were divided among eight different herds with a total of approximately 2,500 pure-bred Shorthorn cows on the ranch. Shorthorn cows.

Two bulls were specifically selected and pasture mated to fifty cows each. These bulls were referred to as the "Chiltipin" bull and the "Vinotero" bull. One of the females in the Vinotero bull's group was a milk cow with one-sixteenth Brahman blood that she carried as a descendant of the O'Connor bull through his son Chemmera. The result of this mating was a bull called Monkey. In 1920 an outstanding bull calf called Monkey was produced.

He was a son of Vinotero, one of the bulls who was purchased in 1918. With a distinctive red color, and an exceptionally deep and well-muscled body, Monkey would be the start of a breed. Yes, with the birth of Monkey, and a decision to line-breed, thus came a very uniform and very hearty breed of beef cattle.

Through many generations, his descendants have retained the rapid and efficient growth, solid red color, hardiness, and good disposition for which Monkey was noted. The origin given by King Ranch is that it was formed by mating Brahman bulls with Beef Shorthorn cows, with the final composition being about 3/8 Brahman and 5/8 Shorthorn.

Modern Santa Gertrudis cattle are approximately five-eighths Shorthorn and three-eighths Brahman. These cattle are a deep cherry-red color, and they display a blend of Bos indicus and Bos taurus attributes: they have a short, smooth, slick coat; the hide is loose and there are neck and navel folds; while they show very little evidence of a hump, males have a small Zebu-type hump; their ears are medium to large; and they may be horned or polled. Though the breed is cherry red, occasionally you'll find them with white markings on the underline.

Quality and uniformity in registered cattle is enforced by a rigid classification system by the breed association. Animals that do not meet the minimum requirements are rejected. While there were 283 herds recorded in Volume I of the Herd Book, the King Ranch herd was designated as the Santa Gertrudis Foundation Herd. Other herds that had attained the purebred status by continuous grading up were designated as Foundation Herds.

Though developed in South Texas, believe it or not, Santa Gertrudis cattle are considered a tropical beef breed of cattle.

They are a very hardy breed, and have improved beef quality over most purebred Brahmans. The breed is noted for heat tolerance as well as tick and bloat resistance. Characteristics also include ease of calving, excellent mothering ability, abundant milk supply, good milking ability, good for beef production, and an ability to turn off (sell or use for food) a steer at just about any age.

Under normal management and with adequate nutrition these females will breed at 12-14 months of age and produce their first calf as a two-year old. The Santa Gertrudis is an above average producer of milk.

Due to this heavy milk production she will also wean a heavier calf. An economically important bonus that makes money for cattlemen is the longer productive life of the Santa Gertrudis female. A female can remain in production well past her 12th birthday and may stay in the breeding herd as long as 18 years.

If you consider the average production life of most cows is 9-10 years you realize the Santa Gertrudis female is producing an additional three calves - this means more return on your original investment. Carcases from very young cattle develop a large eye muscle of meat with little or no waste fat.

Steers can be turned off at any age depending on environment and conditions. Older steers yield well, with minimum fat cover acceptable to premium world markets. Weight for age is a noted attribute of the breed. They are well noted for their weight for age and ability to achieve high weight gains both on pasture and in feedlots.

Crossbreeding is an important tool in today's cattle industry. Brahman influence is important to cow/calf producers, yearling operators and feeders. It provides maternal traits, gainability and feed efficiency. A touch of Brahman makes cattle hardier, healthier and less prone to disease and parasites.

Because Santa Gertrudis cattle possess 3/8 Brahman and 5/8 Shorthorn, the breed has just the right amount of Brahman influence to boost performance in crossbreeding programs in any area or environment. This combination of Brahman and Shorthorn allows producers who use Santa Gertrudis to maintain Brahman influence without getting too much ear. That is why the breed plays an important role in cross-breeding programs. In addition, it makes significant contributions to both maternal and growth traits.

Commercial producers also know that Santa Gertrudis are built for the American range, to produce meat and money. Crossbreeding with Santa Gertrudis produces outstanding replacement females regardless of the breed.

Both the purebred and the crossbred Santa Gertrudis female possess exceptional maternal traits to produce heavy uniform calf crops that are marketable and profitable. Purebred Santa Gertrudis steers are exceptional feeder calves, that gain rapidly and efficiently while still producing a high quality, lean carcass. At the same time these steers are producing a profit for the feeder.

At a recent Texas A&M University Ranch to Rail feeding trial, a pen of purebred Santa Gertrudis steers had a net profit of $100.87 per head. This compares to a minus $50.29 for 1334 steers from 137 ranches.

Santa Gertrudis steers, purebred or cross, prove that they can gain above and beyond the national average when in the feedlot.

In a recent test of purebred Santa Gertrudis steers fed at the Circle E Feedlot in Potwin, Kansas the average daily gain for this set of 116 steers was 3.84 pounds. These steers were fed for 133 days. In another test, purebred Santa Gertrudis steers from Alabama were shipped to Heritage Beef Cattle Company in Wheeler, Texas. This group of 58 steers was fed for 163 days. They had a daily gain of 3.93 pounds per day and a feed conversion rate of 5.95. The total cost of gain was $41.27.

In a South Texas bull gain test, 64 Santa Gertrudis bulls performed quite well in comparison with the other breeds represented. Bulls were fed for 112 days. The average final weight for these bulls was 1060 pounds, the average daily gain was 3.61 and backfat was .20.

Adaptability is a must to survive in the cattle industry.

Santa Gertrudis are adaptable to most climates, environments and terrains. Their make-up of 3/8 Brahman, 5/8 Shorthorn has proved to be ideal in most of the varied environments around the world. They thrive in the hot, humid weather conditions found along the coastal regions of Texas, Louisiana, Mississippi, Alabama and Florida. They also perform well in the more arid regions as those found in South Texas, Arizona and New Mexico.

While the crossbred Santa Gertrudis is a valuable commodity to cattlemen all over the world, purebred Santa Gertrudis herds are located as far south as Argentina and as far north as Canada. Their thick hide serves as insulation to the cold and as a barrier to insects and parasites. The presence of sweat glands in their loose hide also helps Santa Gertrudis dissipate heat in warm environments.

Santa Gertrudis are very disease resistant and will stay healthy in feedlots and confined environments. And yes, these hardy animals will travel long distances in search of forage or water. Because of their hardiness, Santa Gertrudis cattle are known the world over for their ability to adapt to harsh climates.

They were exported to Australia around 1951 and have been subjected to inspection and classification since then. The Santa Gertrudis Breeders (Australia) Association was established in 1954 and the Santa Gertrudis Group Breedplan has operated in Australia since 1994. Anna Creek, Australia's largest cattle station raises Santa Gertrudis.

Santa Gertrudis have proved to be one of the world's leading and most efficient producers of quality beef.  Santa Gertrudis breeders have responded to the changes in the beef industry by selecting genetics that perform in the pasture, feedlot and the retail meat markets of the world.

Whether purebred or commercial, Santa Gertrudis cattle measure up and produce results for the producer. As the cattle industry changes to more crossbreeding, Santa Gertrudis bulls are being used extensively with almost all other breeds throughout the world with outstanding results.

For ranchers, one benefit that is not talked about is that Santa Gertrudis cattle are generally the heaviest of the beef breeds. So yes, a rancher can get more bang for his buck when raising this breed.

I received a note telling me that reading this article was a waste of time, and that it told him nothing. For the person who wrote me, I'm very sorry to hear that.

While I put these breed articles out to help 4H youngsters, it is my experience that most real cattlemen know that any information that you can find is always seen as an asset. Only a fool walks around thinking that he knows it all. Only a fool believes that he can't learn any more than what he already knows.

These articles on cattle breeds are not all there is to know about these breeds. These articles are meant to get you, my reader, acquainted with the breed above. This information was compiled from various sources.

I hope you find it useful.