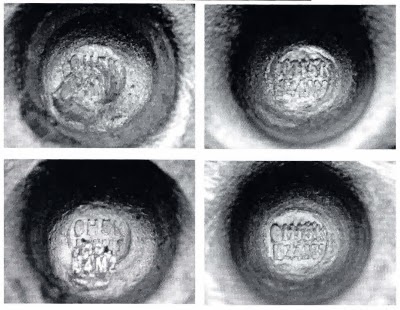 One of the myths that anti-gun people, those who would deny others our 2nd Amendment Rights, like to spread is that independent testing by forensic technologists show that microstamping technology is reliable.

That is a lie!

Fact is, in tests a full  46% of impressions are ranked as “unsatisfactory,” illegible, after firing only ten rounds.

Yes, almost half of all stamps can't be read.

Besides that very important fact which points to the unreliability of the technology, how stupid do you have to be to think that criminals - who right now practice filing down serial numbers on the sides of guns - won’t hesitate for a moment to file or exchange firing pins.

And if the capabilities of criminals are not a factor and simply don't matter to anti-gun people, then maybe the fact that firing pins are readily removable and swappable in most models of handguns.

Yes, just about anyone can swap out and replace inexpensive replacement parts.

﻿﻿﻿﻿Of course there is also the issue of reloaded ammo, which is extremely common these days due to the economics of recycling casings, the ban on lead.

Home reloading in itself makes prosecuting cases nearly impossible once the “reloaded ammo” defense is raised for microstamping that imprints case sides.

A shell casing may have two or more markings, making the final shooter impossible to identify. And yes, that in itself may get criminals off instead of being convicted.

Some deviously clever defense attorney might find a jury gullible enough to believe him when he asserts that the microstamped cartridges did not come from his client's gun but instead must have come from the first owner of the gun - even though the casings were from a stolen gun.

And yes, most crimes perpetrated in the United States are done with stolen throw-away guns.

Knowing these fact of life, what makes anyone think that microstamping shells will accomplish anything other than placating Liberal anti-gun political donors.

How Does Microstamping Work?

Firearm microstamping, or ballistic imprinting, works by engraving a microscopic marking onto the tip of the firing pin.

When the gun is fired, it leaves an imprint, usually of a serial number, on the bullet casings.

In theory, the telltale mark allows law enforcement investigators to trace the bullet to the registered gun owner.

California’s law is the first in the nation to be implemented and was originally signed into effect in October 2007, but not implemented until recently. And yes, several other states are considering similar measures.

For now, like other laws these days, the government and law-enforcement are exempt from the microstamping requirements.

One of the main arguments critics pose is the claim that the technology is not perfected, yet the requirement has been put into effect.

The patent holder of microstamping tech, Todd Lizotte, was part of a Department of Justice study team which concluded:

“Legitimate questions exist related to both the technical aspects, production costs, and database management associated with microstamping that should be addresses before wide scale implementation is legislatively mandated.”

That statement is according to the study which was published in the Association of Firearm and Toolmark Examiners (AFTE) Journal.

With all of this, does anyone wonder why Smith & Wesson and Ruger have decided to quit selling their line of semi-automatic handguns in California over stamping requirement?

The new California gun law of microstamping, which anti-gun proponents say will help law enforcement, has now driven Smith & Wesson and Sturm Ruger out of California.

The two companies have announced they will stop selling part of their wares in the nation's most populous state rather than try to comply with a law that requires some handguns to have technology that doesn't work.

Yes, the imprints a tiny stamp on the bullet so it can be traced back to the gun has not been proven to work!

The companies, and many pro-Constitutionalists, say "microstamping" technology is unworkable in its present form, can impair a gun's performance, and can be used by defense attorneys to get their clients off.

“A number of studies have indicated that microstamping is unreliable, serves no safety purpose, is cost prohibitive and, most importantly, is not proven to aid in preventing or solving crimes.”


"This is the latest attempt to undermine the Second Amendment in California by politicians with little to no knowledge of firearms ... " said Chuck Michel, National Rifle Association

“The microstamping mandate and the company’s unwillingness to adopt this so-called technology will result in a diminishing number of Smith & Wesson semi-automatic pistols available for purchase by California residents.”

Sturm Ruger also announced this month that they will also stop selling their guns in California due to the microstamping law.

Microstamping critics say tracing a bullet to a registered gun owner does little to fight crime, since criminals often kill with stolen handguns.

A Backdoor Assault On Our Constitutional Rights

Many believe tracing bullets was never the real intent of the law in the first place.

“The technology doesn’t fully exist yet, but by making it into a law, they [California] in fact enacted a gun law without actually passing one,” David Kopel, a constitutional law professor at the Denver University Sturm College of Law and Research Director of the Independence Institute, told Fox News.

“This is an indirect way to ban new handguns from being sold.”

"This is the latest attempt to undermine the Second Amendment in California by politicians with little to no knowledge of firearms, who seek to impose their liberal values upon those who choose to protect their families with the constitutional right to own a handgun," said Chuck Michel, West Coast Counsel for the National Rifle Association, an Adjunct Professor at Chapman University and author of the book "California Gun Laws."

Two trade groups, the National Shooting Sports Foundation and the Sporting Arms and Ammunition Manufacturers Institute, have filed a legal challenge to the law in California Superior Court earlier this month.

The lawsuits filed against California this week by the National Shooting Sports Foundation and the Sporting Arms and Ammunition Manufacturers’ Institute challenge the microstamping law and its technology.

In a statement last week, they say that they predicted back in 2007 when the law was first passed that it would result in a “de facto semiautomatic handgun ban.”

Not surprising, other states considering a microstamping requirement include Connecticut, New York, and Massachusetts.

Smith & Wesson said it expects sales of its California-compliant revolvers, which aren't required to have microstamping, will offset the impact to the company.

Company President and CEO James Debney vowed to continue to work with industry groups to oppose the law, while providing California customers with products that do comply with it.

We should all commend Ruger and Smith & Wesson for their actions as liberals take another backdoor attempt at a semi-automatic gun ban.

Well, they should be tried for treason. And yes, I believe if found guilty - then capital punishment should not be ruled out as a punishment for those wanting to usurp our Constitutional Rights for their own political or financial gains.