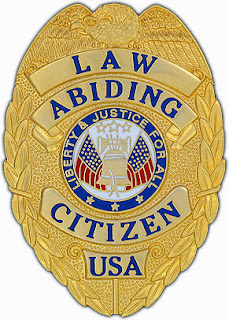 It's not everyday that I read a story that makes me angry and happy at the same time.

I got a little angry when I read that Josephine County Oregon Sheriff had advised the residents of that county to "relocate" because of budget cuts after the voters there did not vote in favor of higher taxes.

Scare tactics and making the situation appear dire is not what I would accept from a County Sheriff, that sort of action jumps the line between working for the public and simply being a cheap self-serving politician.

I was very happy when I read that the citizens up there confronting him by stepping forward to take ownership of their security and replace the County Sheriff's Deputies by assuming their duties.

In her article she talked about how "budget woes reduced the sheriff's department in one rural Oregon county to a bare-bones force."

She reported, "the government in Josephine County, where nearly 70 percent of the land is owned by the U.S. government, had long relied on federal timber subsidies to pay the bills. When the feds terminated the funds, county officials scrambled to pass a May 2012 tax levy to make up a nearly $7.5 million budget shortfall."

However, the county's residents voted against the levy, and as a result the Josephine County Sheriff’s Office was gutted.

With that vote, the County Sheriff closed the major crimes unit, ordered dozens of prisoners released from the county jail, and reduced his department's operations to Monday through Friday - and only eight hours a day.

Opinions are split as to whether his actions were a direct result of the cuts that needed to be made, or simply as an Obama type of vindictiveness where someone in government got angry and decided that the citizens who voted down new taxes needed to feel his wrath.

Either way, after the vote cuts took place. And after the cuts, the Josephine County Sheriff’s Office issued a press release announcing their deputies "would only be responding to what they deemed life-threatening situations."

The County Must Be Having A Crime Wave?

On the contrary! Overall crime, according to county statistics is at a 4 year low.

OK, just for the record, I have had a lot of friends in law enforcement - especially back in the 1980s and '90s when I was working with a lot of police departments in the San Francisco Bay Area.

One of the complaints very common among them back then, from those who were in Supervisor (Watch Commander) positions, was always having to justify salaries and manpower needs..

I remember being told that one of the difficulties of asking for more money every fiscal year was having to justify their requests. He said that the worse thing that happens to a department is having to report annual crime statistics. He said they only works in your favor when crime is up.

If crime is up, then any department can go to the city or county, or the voters, and ask for more money for equipment, more officers, and pay raises. They can ask for more of everything and anything, needed or not, and they'd get it.

If it is down, he said, departments down play the report because it doesn't help them justify asking for more of anything, needed or not. And yes, just as you suspect, their requests for more would most likely be turned down.

Besides crime statistics, there are the other stats that don't help departments.

As a friend once said: officers are now getting paid more and have more benefits than ever before - yet because of paper work and other menial duties, they respond to less calls and have less patrol time on the street than ever before.

And yes, statistics show that across the nation, police response time is down and more calls are being missed as ever before.

So if crime is down, and departments are responding to less calls, how do you justify asking for more and more without looking greedy?


The Josephine County Sheriff’s Office crime statistics show that while burglaries and auto thefts are up slightly, other types of thefts, criminal mischief, and fugitive arrests are all down.

The Josephine County Sheriff said the numbers do not include the number of calls that went over to Oregon State Police. Supposedly he said  troopers could have responded to those calls or could have rejected them.

If I were the OSP, I'd definitely take issue with that. The State Police up there has an excellent performance record. That department is as good or better than most.

Now that Josephine County deputies are only responding to person crimes, life-threatening incidents, or crimes in progress, victims can file reports online at the county’s website.

Then again, maybe the Sheriff is exaggerating a bit.

Josephine County, Oregon, has a population of 82,930 living in an area 1,642 sq miles in size - just getting around is a challenge.

At 30 calls a day, those two deputies are servicing 10,950 calls a year. That's an incredible number for a place with only 83,000 residents.

By their own crime statistics over the 4 year average, there was a combined average of 1,500 incidents of crime. That 1500 incidents divided by 365 days for one calendar year totals out to be 4.1 incidents a day

So could the sheriff be right that his two deputies are taking 30 calls for service a day. If so, what were those other 8,450 calls?

And honestly, if two deputies are working 10 hour shifts a day and does respond to 30 calls a day (15 calls each), then that means that each call takes 40 minutes from start to finish continuously - and that does not take into account travel time in a jurisdiction that is 1,642 sq miles big.

So yes, I really believe that the sheriff might be mistaken. Forgetting the simple math, just the crime statistics alone doesn't add up to as mean a crime ridden place as the Sheriff is making it out to be.

Relocate - Flee For Your Lives - What's that all about?

No kidding! Imagine that for a moment - your sheriff's department actually encourages you to sell out and move out if you feel unsafe.


As hard as that is to believe, the Josephine County Sheriff’s department informed their residents, in the original released statement:

“... the Sheriff's Office regretfully advises that, if you know you are in a potentially volatile situation (for example, you are a protected person in a restraining order that you believe the respondent may violate), you may want to consider relocating to an area with adequate law enforcement services”.

Makes me wonder if there is some sort of a war going on in the mean streets of Josephine County up there in Oregon, so mean that the law up there says either vote for higher taxes or run for your lives!

Their Sheriff's Office didn't say find a way to protect yourselves, such as exercising your 2nd Amendment Rights to arm yourself in case of "a potentially volatile situation (for example, you are a protected person in a restraining order that you believe the respondent may violate)".

No, instead they said, you might want to run away because the Government can't protect you.

Please understand that what the County Sheriff up there is advising the citizens there simply goes against all of the crime statistics being reported in the last 30 years. While crime there in that county is certainly down over the past 4 years, Nationally crime is the lowest in 30 years.

Places like Chicago and Detroit make the us look like we're living in a war zone, but take them away and we soon find that that is not the case.

But hey, I'm sure that that the Josephine County Sheriff already knows that fact.

Besides crime being down, there is also the proven fact that law enforcement responds to acts of violence only after the act has already taken place and the perpetrator is long gone.

Yes, nothing has changed since my days working with law enforcement agencies in the San Francisco Bay Area - many department are simply political machines who always try to legitimize their existence.

Facts are facts, and whether city and county law enforcement wants to admit it or not, even after spending Millions of Taxpayer Dollars on all sorts of new equipment, armored vehicles, simulators, and tactical gear, all designed to wage urban warfare, response time has only gotten worse over the years.

Compare today's response times with what it was 30 years ago when departments spent just a small fraction of what they do today, and one has to ask if we are getting our money's worth?

Comparing Josephine County Oregon with say Alameda County California would be like comparing apples and oranges simply because they are so different.

But let's compare apples and apples. In my county, Calaveras County with a population of 44,742 stretched over 1,037 sq miles, our County Sheriff has a policy of empowering our citizens to protect ourselves.

I have spoken with Calaveras County Sheriff Gary Kuntz a couple of times about his common sense approach to law enforcement.

Subsequently, Calaveras County Sheriff Kuntz utilizes a common sense approach that does in fact incorporate a citizen's personal responsibility for their own security.

The last thing that our Sheriff down here would do, the very last thing, is to tell the citizens of this county to relocate in an attempt to try to scare us or make the situation look dire and life threatening.

The idea that a County Sheriff up in Oregon would do such a thing is unfathomable, purely political, disgusting!

We are not beholding to others to protect us, we own that - that is ours to provide for ourselves. It is gratifying to see Americans taking ownership of their own protection. It is the true spirit of America.