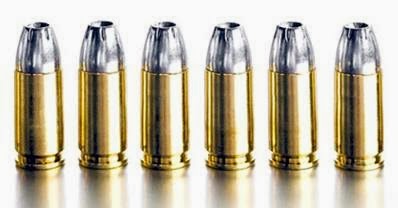 January 6th, 2014, will go down as a victory for Americans who live in the corrupt ultra-violent city of Chicago.

I was talking with a friend who is a just retired Police Officer. He was telling me about a study that shows how the United States comes in in the top 5 of countries with high murder rates.

He said that that same study also shows that if you took out Chicago and Detroit from the equation, than the United States drops to the bottom 5 among nations in so far as murder rates go.

The mounting homicide rate in President Obama's real hometown, and no I don't mean Nairobi Kenya, is certainly giving ammunition to political cops and anti-2nd Amendment bullies in the crocked political machine in Chicago's City Hall.

But, it is also pointing out the city's laughable excuses to stop citizens from defending themselves in that war zone called Chicago.

While Chicago and Detroit might be the armpits of the United States, Chicago at least suffered its deadliest January in more than a decade.

But Monday, January 6th, 2014, might be a day to celebrate emancipation from the Slave Owners in Chicago's City Hall who don't want Americans armed.

On Monday, a Federal Judge overturned Chicago's ban on the sale and transfer of firearms, ruling that the city's ordinances supposedly aimed at reducing gun violence are Unconstitutional.

U.S. District Judge Edmond E. Chang said in his ruling that while the government has a duty to protect its citizens, it's also obligated to protect their Constitutional Rights - which includes the Right to Keep and Bear Arms for Self-defense.

While Judge Chang showed sense in this matter in as far as allowing citizens to the God given right to defend one's self - the Judge blew it when he said he would temporarily stay the effects of his ruling.

That means the Chicago's ordinances can stand while the city decides whether to appeal.

The decision is just the latest to attack what were some of the toughest gun-control laws in the nation.

And last year, Illinois legislators were forced by a federal appeals court to adopt a law allowing residents to carry concealed weapons in Illinois - the only state in the entire that still banned the practice.

The resulting state law largely stripped city and officials of surrounding Cook County of their authority to regulate guns, which especially irked officials in Chicago, where residents had to apply for concealed-carry permits through the police chief.

Judge Chang, who was appointed by President Obama, ruling in favor of the Second Amendment and our Constitutional Rights shows just how out of step and controlling that Chicago's City Hall really is.

Judge Chang's ruling came in a lawsuit filed by the Illinois Association of Firearms Retailers and three Chicago residents.

The judge noted Chicago's ban covers not only federally licensed firearms dealers, but also gifts among family members, all in the name of reducing gun violence.

Chang wrote that the nation's third-largest city "goes too far in outright banning legal buyers and legal dealers from engaging in lawful acquisitions and lawful sales of firearms, and at the same time the evidence does not support that the complete ban sufficiently furthers the purposes that the ordinance tries to serve."

Chicago last year had more homicides than any city in the nation. And yes, last year, Pentagon officials came out with statistics that it is safer to be a soldier or Marine fighting in Afghanistan than it is to live in Chicago.

City officials have long acknowledged the ban on gun sales has been weakened due to the legal sale of guns in some surrounding suburbs and states. Imagine that!

Chicago gun collector Kenneth Pacholski, one of the plaintiffs, said he has no interest in selling guns and buys only antique guns that he intends to keep. But he said Chicago's ban was unreasonable.

"All the people I know who own guns legally are really careful," said Pacholski, whose wife, also was a plaintiff. "I'm a collector; my guns are not going anywhere unless I know where they're going because I don't want to be responsible for someone's death."

"I'm not sure what the city's plan is (in reacting to ruling), but I think obviously there is a need to make sure gun dealers coming into the city are aware of those who have restrictions on gun ownership and don't sell to them," he said.

Yes, Walsh is typical of people who don't want to face facts:

Criminals do not get their guns LAWFULLY, they get them ILLEGALLY.

Maybe when folks like Walsh over at Illinois Council Against Hand Gun Violence, the ACLU, and of course Chicago City Hall understand that simple fact of life, they will better understand the other fact when it comes to gun ownership and crime:

When citizens have the means to defend themselves with a firearm and not just a 911 Operator on the line, crime goes down because the criminals think twice about committing those crimes.

What proof? Well, here's a tidbit of History:

During the Reconstruction Period in the South after the Civil War, Freed Black Slaves were being hunted and killed.

The newly formed National Rifle Association saw it their duty to arm those freed from Slavery. Since they became American citizens, they had the right to Keep and Bear Arms and Self-Defense.

Once those Freed Blacks were armed by the NRA, the murder rate on those Americans started to drop.

Across the country today, the same thing is taking place. Americans are defending themselves and crime - especially homicides - is at a all time low everywhere where Americans can exercise their Constitutional Rights.

Those facts are inconvenient to uneducated liberals and others who think the Constitution is out of date and should be scraped.

For us, America's educated citizens, we know the fact that our rights make us stronger. And yes, those who stop us from exercising our rights are criminals.