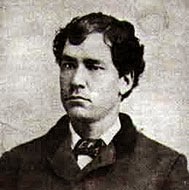 I love stories like this, I hope you do as well. It goes to the heart of what one person can do if he or she puts his or her mind to it.

Elfego Baca was a lawman, a lawyer, and even a politician in what some call the closing days of the American West. Elfego was born on February 10, 1865, in Socorro, New Mexico just before the end of the American Civil War.

His father was Francisco and mother Juana Maria Baca who moved to Topeka, Kansas when he was a young child. But later, with his mother’s death in 1880, young Elfego returned with his father to Belen, New Mexico, where his father became town marshal.

In 1884, at age 19, Elfego acquired some guns, and became a deputy sheriff in Socorro County, New Mexico, though legend differs on how that took place. Most believe the legend that says when young Elfego learned several drunken cowboys were terrorizing the local Mexican townspeople of Frisco, now called Reserve, he decided to take action.

He had just received a "mail-order sheriff’s badge" with his "mail-order" diploma from the "mail-order correspondence course in law enforcement that he'd been taking. After having the badge, he supposedly stole a handgun and rifle, then it's said that he "persuaded" a local Justice-of-the-Peace to deputize him to handle the problem of the out of control cowboys. Once that was done, a young head-strong Elfego Baca made the 130-mile trek south, determined to bring about justice.

Probably because of his father's influence, and yes despite he himself having a few run-ins with the law, Elfego Baca would become best known as a peace officer.

When he was young, he is known to have said that he wanted “the outlaws to hear my steps a block away.” Southwestern New Mexico at the time was still relatively sparsely settled cattle ranching country.

Because of the money that the ranches brought to any town, their hands did as they pleased. And yes, cowboys were known to come into a town, drink up the saloon, harass the locals, and possibly shoot up the town out of boredom. In fact, this sort of thing was so common that many saloons in the old west actually lined their inner walls with wood planking and even boiler plates to stop bullets from killing some innocent next door or in a room on a second floor. Elfego meant to put an end to that.

In October, 1884, in the town of Lower San Francisco Plaza, New Mexico, Elfego Baca arrested a drunk cowboy named Charlie McCarty. Elfego did in fact show his mail-order badge to McCarty. And believe it or not, the young Baca took Charlie's gun.

But when McCarty's fellow cowboys tried to take him by force, Elfego refused, drew his pistol and opened fire on the cowboys. One round struck and killed the horse of one which fell and in the process killed its rider. Whether by accident or not, Elfego also shot another Cowboy in the knee.

Later, Justice-of-the-Peace Ted White granted Charlie McCarty's freedom. Unhappy with that, right after the verdict, Elfego left the courtroom while still in possession of McCarty's gun. Hearing the threats and being smart enough to understand that he needed refuge, Elfego dug in at the home of a friend - Geronimo Armijo - which was only a "jacal".

Since I had never heard of a jacal, I found out that a jacal is a small adobe style structure which was historically a style of homes found throughout parts of the south-western United States and Mexico used by some Native people of the Americas which pre-dates the arrival of Europeans to that area.

I found out that jacals were also later used by both Hispanic and Anglo settlers in the southwest and Texas.
Bert Hearne, a rancher from Spur Lake Ranch, was summoned to bring Elfego back to the Justice-of-the-Peace for questioning in now what was being termed "the murder of Jon Slaughter's white foreman." After Elfego refused to come out of the adobe jacal, Hearne entered to talk with him about coming out.

Elfego might have been young, but he certainly was not stupid. He knew real well that there was a lynch mob mentality out there, and they weren't above hanging him and his mail-order badge from a telegraph pole. Soon enough the point became mute. Yes, it didn't mater much as shots slammed into the jacal - one hit Hearne in the stomach killing him soon after that.

Not hearing anything from the jacal, those on the outside let all Hell brake loose as hundreds of shots slammed into the little structure. The shots started a standoff with the cowboys. And yes, the number of cowboys shooting up the jacal has been disputed. But, all in all, most sort of agree that between 70 and 80 angry people were there raining lead on that little structure.

Elfego himself later claimed there had been at least 80.

It was reported later that the cowboys and others fired more than 1,000 rounds into the little home. So much so that the adobe building was full of holes. And yes, incredibly, not one of the bullets struck Elfego. The reason he wasn't hit? Well, its said that the floor of the home is said to have been slightly lower than ground level. Yes, Baca was able to escape injury by getting down and hugging dirt.

During the siege, which became known as "The Frisco Shootout," Elfego Baca shot and killed four attackers and wounded eight others. After about 35 hours of fighting, and roughly 1,000 rounds of open fire, the battle ended when Francisquito Naranjo convinced young Elfego to surrender.

So yes, in May, 1885, Elfego Baca was charged with murder for the death of Jon Slaughter's foreman - and, believe it or not, with the killing of Bert Hearne. He was jailed to await his trial, but in August, 1885, Elfego was acquitted after the door of Armijo’s house was entered as evidence at the pre-trail inquest. The door had more than 400 bullet holes in it.

It's true, when the cowboys later tried to have him hanged for murder, Elfego produced the bullet-riddled door of the shack to the court and was instantly acquitted. After that, Elfego didn't need that "mail-order badge" anymore because he was "officially" made the Sheriff of Socorro County.

His first duty was to secure indictments for the arrest of the area's lawbreakers. Instead of ordering his deputies to pursue the wanted men, he sent the accused a letter.

Elfego's letter was brief and to the point, it said, "I have a warrant here for your arrest. Please come in by March 15 and give yourself up. If you don’t, I’ll know you intend to resist arrest, and I will feel justified in shooting you on sight when I come after you."

Most of the offenders turned themselves in voluntarily.

In 1888, Elfego became a Deputy U.S. Marshal. He served for two years and then began studying law. In December 1894, Elfego Baca was admitted to the bar and joined a Socorro law firm. He practiced law on San Antonio Street in El Paso between 1902 and 1904.

As for being a lawyer, well let's just say that you and I would want him on our side. Take for example the story about the time when he was practicing law in Albuquerque. Elfego received a telegram from a client in El Paso, Texas.

The telegram read: "Need you at once. Have just been charged with murder."

Elfego supposed responded with a telegram that said, "Leaving at once with three eyewitnesses."

Yes, during his life he held a succession of public offices, including county clerk, mayor and school superintendent of Socorro County, and district attorney for Socorro and Sierra Counties. In his book The Shooters, historian Leon Metz writes that “most reports say he was the best peace officer Socorro ever had.”

But no, his life was far from over. In fact, from 1913 to 1916, Elfego Baca served as the official representative in the U.S. of Victoriano Huerta's government during the Mexican Revolution. One legend about Elfego that's true is the story about what took place in April of 1915. That's when he was charged with criminal conspiracy for allegedly masterminding the November 1914 escape of Mexican general José Inés Salazar -- who had somehow escaped from the Albuquerque jail.

When Elfego was successfully defended by the New Mexican lawyer and politician Octaviano Larrazolo, Elfego's reputation grew among Southwestern residents. Another legend about Elfego Baca says that he stole a pistol from none-other than Pancho Villa, and the angry Villa put a price of $30,000 on Baca’s head. Obviously, it was never collected.


When New Mexico became a state in 1912, Elfego Baca unsuccessfully ran for Congress as a Republican. Later he would run for another office as a Democrat, so yes the man grew into a real politician. Nevertheless, he remained a valued political figure and even working at times as a private detective.

Historian Leon Metz, his biographer, wrote: "Elfego was, and is, controversial. He drank too much; talked too much ... he had a weakness for wild women. He was often arrogant and, of course, he showed no compunction about killing people."

Elfego Baca died of old age on August 27, 1945. Imagine if you would. He died just a few days after an atomic bomb was dropped on Hiroshima which ended World War II.

Back in July 1936 before his death, historian Janet Smith conducted an interview with Elfego Baca.  Today, her notes can be found in the Library of Congress, Manuscript Division, WPA Federal Writers’ Project Collection. During the interview, Elfego Baca told Miss Smith, “I never wanted to kill anybody, but if a man had it in his mind to kill me, I made it my business to get him first.”

To me, that's called sound logic. 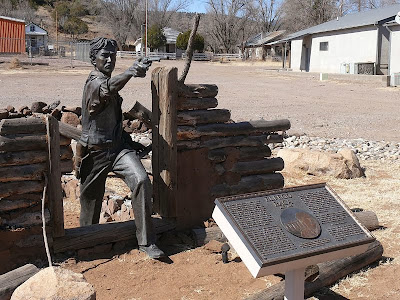 Just as a point of interest, the 1950s western television series Have Gun Will Travel episode Charley Red Dog was inspired by the Elfego Baca story. The show's story-line is about how Paladin meets a young Native American, who had taken a correspondence course in being a Deputy U.S. Marshal, and who actually plans to install himself as lawman in a beleaguered town with a mission to drive out all the desperadoes there.

Paladin is charmed by the sincerity and honesty of the seemingly naive Charley Red Dog, whose grandfather was shot for sport in the very same town. Paladin figures he can assist the young man, but Charley Red Dog doesn't want any help. Because of his assertion to go it alone, Paladin secretly assists the young man before he himself learns that Charley Red Dogs really doesn't need any help and that he had enough grit to do it on his own.

As with the television episode and character Charley Red Dog, Elfego Baca in real life certainly had grit. He feared no one.

At least that's just how I see it.