The First Battle of Bull Run, 1861: An Eyewitness Account 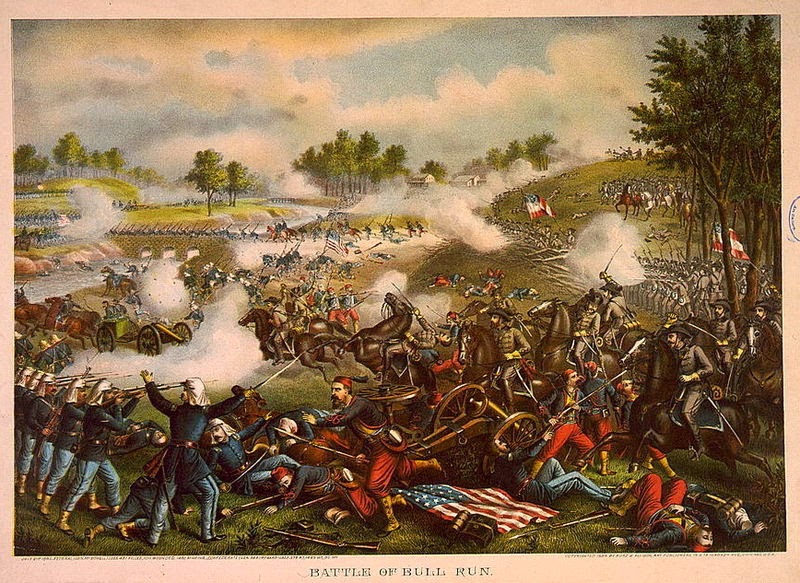 Because they post letters from people who were actually there, I really enjoy a website called EyeWitness to History.

Below you will find a letter that is interesting in that it gives a great account of what took place from the eyes of a Corporal in Company D of the Second Rhode Island Volunteers.

The writer expresses what he went through, what he saw take place, and also what he thought was taking place around him.

The reason I preface this is because some of the numbers regarding troop strengths which the writer put to paper may have been inaccurate. But frankly, how could he have known that?

In the heat, the smoke, and the confusion which was the First Battle of Bull Run, the young Corporal did what he did to do his duty while trying to stay alive. And yes, that is evident in this eyewitness account.

Just a few months after the start of the war at Fort Sumter, the Northern public clamored for a march against the Confederate capital of Richmond, Virginia.

Newspapers and many Northern politicians expected to the battle at Bull Run to bring an early end to the rebellion.

The First Battle of Bull Run, also known as First Manassas by Confederate forces, and was fought on July 21, 1861, in Prince William County, Virginia, near the city of Manassas, not far from Washington.

Each side's troops was poorly trained, but Northern troops were at a disadvantage because of poor leadership from the start of the war.

It was the first major land battle of the Civil War.

In July of 1861, Northern newspapers were pressuring President Lincoln to bring a quick end to the rebellion of the Southern states.

Adding to his problems, Lincoln was very conscious that the 90 day enlistments of the recruits who had responded to his call to arms after the attack on Fort Sumter were rapidly coming to an end.

Lincoln was pressed for action. So in spite of his hesitancy that his troops were not yet adequately trained, he had General Irvin McDowell propose a plan.

McDowell was an administrator who was promoted to Brigadier General in the United States Army on May 14, 1861. He was almost immediately given command of the Army of Northeastern Virginia, despite never having commanded troops in combat.

The promotion was partly because of the influence of his mentor, Treasury Secretary Salmon P. Chase. Yes, even back then there were politics when it came to promotions!

Although McDowell knew that his troops were inexperienced and not ready -- and yes, he is known to have protested letting people know that he was a supply officer, and not a field commander -- he gave in to pressure from the Washington politicians who forced him to launch a premature offensive against Confederate forces in Northern Virginia.

He would march his army of 35,000, currently bivouacked around Washington, 30 miles south and attack the Confederate forces defending the vital railroad junction at Manassas, Virginia.

It was believed that victory there would open the way to the Confederate capital at Richmond.

The Union troops were indeed inadequately trained. Believe it or not, it took over two days for them to march 22 miles south.

It is said that the summer heat was oppressive. And yes, it is also said that many of the young soldiers wandered from the line of march wander off to go pick berries and rest.

The Union Army finally reached its objective on the evening of July 18 and encamped along a small stream known as Bull Run.

The green troops needed rest and their stocks of food and ammunition that had been discarded along the road had to be replenished.

Yes, infantry troops afoot on a long march "lightening their packs" to make the march easier. It is nothing new in history of warfare.

Some accounts say that most could find a battle by simply following the trail of discarded packs and supplies -- and yes, in those days, dead horses.

The Confederate spy network had forewarned them of the Union intentions allowing reinforcements to be moved from the Shenandoah Valley to Manassas.

And yes, even the public was aware of the Union's plans. So much so that on the day of the battle, carriages filled with spectators eager to see the Confederate defeat flocked to the battle site.

I read where one historian said, "Despite these disadvantages, the North almost won the day."

But frankly, "almosts" mean nothing in war.

During the early morning hours of Sunday July 21 the Union troops charged across the stream in front of them and pushed the Confederates into a defensive position atop a hill.

Confusion reigned on both sides as the battle see-sawed throughout the day. Emboldened by the arrival of reinforcements and by the first use of the blood-curtailing Rebel Yell, the Confederates charged forth in the late afternoon.

The Union line melted away. Retreat quickly transformed into mindless rout as the Northern troops rushed back to Washington.

It was a decisive Southern victory. However, sheer exhaustion prevented the Confederates from pursuing the fleeing enemy and capitalizing on their triumph.

"...the stampede became even more frightful"

Samuel J. English was a Corporal in Company D of the Second Rhode Island Volunteers.

Shortly after the battle he wrote his mother a letter describing his experience. We join his story in the early morning hours before the battle:

"Sunday, the 21st about 2 o'clock the drums beat the assembly, and in ten minutes we were on our march for Bull Run having heard the enemy were waiting to receive us, our troops then numbering 25 or 30 thousand which were divided into three columns ours under Col Hunter taking the right through a thick woods.

About eleven o'clock as our pickets were advancing through the woods a volley was poured in upon them from behind a fence thickly covered with brush; the pickets after returning the shots returned to our regiment and we advanced double quick time yelling like so many devils.

On our arrival into the open field I saw I should judge three or four thousand rebels retreating for a dense woods, firing as they retreated, while from another part of the woods a perfect hail storm of bullets, round shot and shell was poured upon us, tearing through our ranks and scattering death and confusion everywhere; but with a yell and a roar we charged upon them driving them again into the woods with fearful loss.

In the mean time our battery came up to our support and commenced hurling destruction among the rebels.

Next, orders were given for us to fall back and protect our battery as the enemy were charging upon it from another quarter, and then we saw with dismay that the second R. I. regiment were the only troops in the fight; the others having lagged so far behind that we had to stand the fight alone for 30 minutes; 1100 against 7 or 8 thousand.

It was afterwards ascertained from a prisoner that the rebels thought we numbered 20 or 30 thousand from the noise made by us while making the charge.

While preparing to make our final effort to keep our battery out of their hands, the 1st R.I. regiment then came filing over the fence and poured a volley out to them that drove them under cover again; they were followed by the New York 71st and the Hampshire 2nd regiments, with 2,000 regulars bringing up the rear who pitched into the "Sechers" (Secessionists) most beautifully.

Our regiments were then ordered off the field and formed a line for a support to rally on in case the rebels over powered our troops.

When the line had formed again I started off for the scene of action to see how the fight was progressing.

As I emerged from the woods I saw a bomb shell strike a man in the breast and literally tear him to pieces.

I passed the farm house which had been appropriated for a hospital and the groans of the wounded and dying were horrible.

I then descended the hill to the woods which had been occupied by the rebels at the place where the Elsworth zouaves made their charge; the bodies of the dead and dying were actually three and four deep, while in the woods where the desperate struggle had taken place between the U.S. Marines and the Louisiana zouaves, the trees were spattered with blood and the ground strewn with dead bodies.

The shots flying pretty lively round me I thought best to join my regiment; as I gained the top of the hill I heard the shot and shell of our batteries had given out, not having but 130 shots for each gun during the whole engagement.

As we had nothing but infantry to fight against their batteries, the command was given to retreat; our cavalry not being of much use, because the rebels would not come out of the woods.

The R.I. regiments, the New York 71st and the New Hampshire 2nd were drawn into a line to cover the retreat, but an officer galloped wildly into the column crying the enemy is upon us, and off they started like a flock of sheep every man for himself and the devil take the hindermost; while the rebels' shot and shell fell like rain among our exhausted troops.

As we gained the cover of the woods the stampede became even more frightful, for the baggage wagons and ambulances became entangled with the artillery and rendered the scene even more dreadful than the battle, while the plunging of the horses broke the lines of our infantry, and prevented any successful formation out of the question.

The rebels being so badly cut up supposed we had gone beyond the woods to form for a fresh attack and shelled the woods for full two hours, supposing we were there, thus saving the greater part of our forces, for if they had begun an immediate attack, nothing in heaven's name could have saved us.

As we neared the bridge the rebels opened a very destructive fire upon us, mowing down our men like grass, and caused even greater confusion than before.

Our artillery and baggage wagons became fouled with each other, completely blocking the bridge, while the bomb shells bursting on the bridge made it "rather unhealthy" to be around.

After I crossed I started up the hill as fast my legs could carry and passed through Centreville and continued on to Fairfax where we arrived about 10 o'clock halting about 15 minutes, then kept on to Washington where we arrived about 2 o'clock Monday noon more dead than alive, having been on our feet 36 hours without a mouthful to eat, and traveled a distance of 60 miles without twenty minutes halt.

The last five miles of that march was perfect misery, none of us having scarcely strength to put one foot before the other, but I tell you the cheers we rec'd going through the streets of Washington seemed to put new life into the men for they rallied and marched to our camps and every man dropped on the ground and in one moment the greater part of them were asleep. Our loss is estimated at 1,000, but I think it greater, the rebels lost from three to five thousand."

The above letter has been reprinted completely unedited.